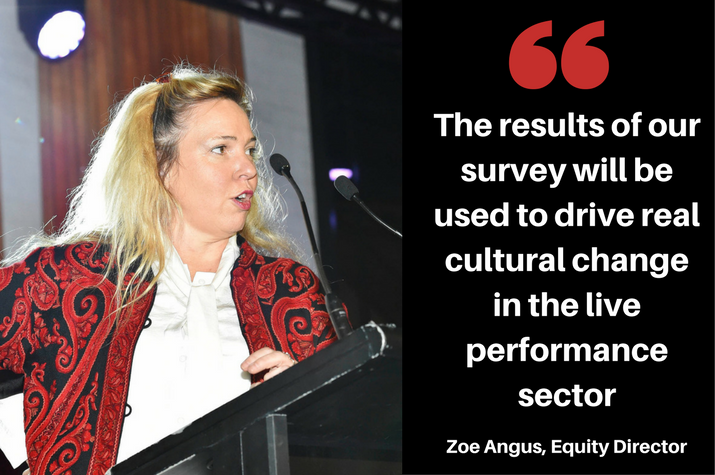 Almost a quarter of victims of sexual harassment, assault or bullying in live theatre do not make a complaint because they fear it will have repercussions for their career, according to our just-concluded survey.

Equity has been gathering data about sexual harassment in our industry for many months. In June this year we launched a survey of Sexual Harassment, Criminal Misconduct and Bullying in Australian Live Performance, months before the Harvey Weinstein story blew. We chose live performance because that’s where we’ve heard stories of particular concern. The screen sector will be surveyed next year as part of the Sex Discrimination Commissioner's initiative to launch a nation-wide investigation.

The results of our survey will be used to drive real cultural change in the live performance sector.

So what do we know? Sexual harassment and bullying in our industry is rife. At least 40% of the 1,124 respondents have experienced it, commonly on multiple occasions. It ranges from suggestive comments or jokes (61%), unwelcome physical familiarity (49%), intrusive questions about your private life (49%), to staring or leering (42%). Similar numbers of people have been witness to these things occurring. Levels of bullying are staggering. Sixty-two percent report they have been bullied at work in live performance, again many saying on multiple occasions. Sixty-three percent have witnessed another person being bullied.

We asked specifically about whether crimes are being committed in or in connection with work. Eleven percent have been physically assaulted at work, 14% have been sexually assaulted, 9% have been subjected to indecent exposure and 10% have been stalked by someone at work.

The majority do not report it when these things happen. More than half (53%) say they have never reported for reasons which range from worry over professional repercussions, a belief that they did not think anything could be done, fears that reporting would worsen the situation, or hope that it would resolve itself. This is the culture of silence we instinctively know is in place.

However, pause for a moment and let's flip that figure. In fact, a significant portion of people do report. More than 40% say they have reported their own experience of workplace harassment. One of the concerning themes from the data is what happens next. Only a third of those who report say the situation was handled well (even if often still unresolved). Half say the situation was not handled well or not handled at all. A quarter of those who report say that reporting made the situation worse.

Notably, complainants are 'reporting' to a raft of different company people – spread evenly between creative, administrative and logistical company roles. A staggering 75% say they are not made aware of the company’s policy on harassment.

This data tells us that companies are seriously ineffective when it comes to dealing with sexual harassment, crime and bullying in the workplace.

One final statistic. The most likely perpetrator of sexual harassment (35%) in live performance is a fellow cast member.

We have taken our data to the state theatre companies to create change. Companies need effective practices in place to address sexual harassment and bullying in the workplace. That means strategies to both prevent this conduct and effectively resolve complaints. Starting with the theatre companies, we will work with dedication and in collaboration to achieve these goals.

I would like to thank Sophie Ross and the team of freelance artists who have worked with her for their role in the research that was recently forwarded to the state theatre companies.

Given the prevalence of cast member on cast member harassment, we will also commence an education campaign of our members. What is sexual harassment: how to spot it, how to report it, and how to prevent it. We have no tolerance for this kind of behaviour, regardless of who the perpetrator is, and we will redouble our efforts to ensure that performers behave respectfully towards each other.

Our industry must have the creative elasticity to be boundary-pushing, bawdy and provocative but from a baseline of respect and consent. This principle applies to all. If you're uncomfortable, say so. If you know it's causing offence, stop it. If you're making someone sexually uncomfortable, don't. If you're not sure, check. If you see someone vulnerable, speak up for them. This is our community. This is the watershed moment for change.

Zoe Angus is the National Director of the Equity section of the Media, Entertainment & Arts Alliance.