The Media, Entertainment & Arts Alliance will work with all the major state theatre companies and freelance artists to develop more effective policies for dealing with sexual harassment, assault and bullying in live theatre in the wake of research that almost a quarter of victims do not make a complaint because they fear it will have repercussions for their career.

An independently facilitated forum will be held in the first quarter of 2018 to drive real change and lasting solutions in live theatre. The forum will include representatives from all major state theatre companies, MEAA and freelance artists.

Since the middle of this year, MEAA has been working with a team of freelance artists, led by Sophie Ross, to understand the breadth of the problem.  Last week, the research findings were forwarded to the theatre companies.  These findings clearly identify the extent of sexual harassment and bullying, and the ineffectiveness of the existing procedures to deal with it.

MEAA welcomes the commitment from the Confederation of Australian State Theatre (CAST) companies and Griffin Theatre to work together to solve this problem.

“This is a unique moment in history,” said the director of MEAA’s Equity section for performers and actors, Zoe Angus.

“The revelations of sexual harassment in our industry have been sickening, but the rise of the #metoo movement has been inspiring.

“We now have an opportunity to work together to solve this problem. We hope this will be the start of a collaborative effort to create change.”

Sophie Ross, who worked closely with MEAA throughout the research process, said: “Our aim is to ensure that no-one is harassed or bullied at a major theatre company in Australia. If they are, they must be able to access the help they need.

“We want to set a standard for the broader industry and ensure that our theatres are safe and free of harassment.”

At least 40% of 1124 people who took part in a MEAA survey this year had experienced sexual harassment – ranging from suggestive comments or jokes, unnecessary or unwelcome physical familiarity, receiving intrusive questions about their private life, and staring or leering – and a similar amount have witnessed it.

But 53% of victims and 60% of witnesses said they had never reported sexual harassment, criminal misconduct or bullying for reasons ranging from worries about professional repercussions, a belief that they did not think anything could be done, fears that reporting would worsen the situation, or hope that it would resolve itself.

MEAA conducted the survey of workers in the live performance sector, before stories began emerging from the United States about high-profile case of sexual harassment and assault in the entertainment and media industries.

Ms Angus said the low rate of reporting of sexual harassment and bullying pointed towards a historically poor culture in the live theatre sector which had sought to downplay the issue.

She said theatre companies were now acknowledging they had sometimes failed in their responsibility to provide a safe and secure workplace for performers.

“A staggering 58% of respondents to the survey said they were rarely or never made aware of any relevant policies or processes for dealing with these issues,” Ms Angus said.

“And 47% told us that when they did make a report, the situation was not handled well and in half those cases, it even got worse.

“When an individual complains that they have been victim of or witnessed harassment or bullying, they should be able to expect their complaint will be taken seriously and result in action.

“The grim lesson from this data is that there are not effective practices in place in Australian theatres to prevent or deal with sexual harassment and bullying.

“The positive response from CAST to agree to work together gives us great hope that change is on the way.”

Ms Angus said Equity also acknowledged that the survey results were a wake-up call for performers as well, with 35% saying the perpetrator was another cast member.

“Equity is committed to educating our members about sexual harassment, how to spot it, how to report it, and how to prevent it. We have no tolerance for this kind of behaviour, regardless of who the perpetrator is, and we will redouble our efforts to ensure that performers behave respectfully towards each other.”

She said Equity would look at a suite of solutions, including better empowering cast and crew to speak up when they feel uncomfortable, and ensuring that all theatre companies have effective, easily accessible policies and procedures in place.

The survey was conducted by MEAA between July and November to investigate the extent of sexual harassment, criminal misconduct and bullying in Australian live performance. 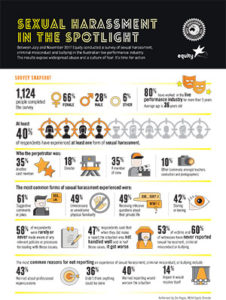