Open letter to the Prime Minister, Leader of the Opposition, Members of Parliament:

We welcome the Prime Minister’s stated commitment to freedom of the press and openness to discuss the concerns that have been raised.

A healthy democracy cannot function without its media being free to bring to light uncomfortable truths, to scrutinise the powerful and inform our communities. Investigative journalism cannot survive without the courage of whistleblowers, motivated by concern for their fellow citizens, who seek to bring to light instances of wrongdoing, illegal activities, fraud, corruption and threats to public health and safety.

These are issues of public interest, of the public’s right to know. Whistleblowers and the journalists who work with them are entitled to protection, not prosecution. Truth-telling is being punished.

The raids, a raft of recent national security laws, and the prosecutions of whistleblowers Richard Boyle, David McBride and Witness K all demonstrate the public’s right to know is being harmed. Truth-telling is being punished.

It is also clear from the global response to the recent raids that Australia’s proud reputation around the world as a free and open society is under threat.

We urge Parliament to legislate changes to the law to recognise and enshrine a positive public interest protection for whistleblowers and for journalists. Without these protections Australians will be denied important information it is their right as citizens to have.

We urge you to take prompt action to protect our democracy for all Australians.

The raft of national security laws passed by the Australian Parliament in recent years claim to combat terrorism but are also being used to attack press freedom. These laws seek to muzzle the media, intimidate whistleblowers and criminalise legitimate public interest journalism.

They seek to punish those that tell Australians the truth about what our governments are doing in our name. They attack the democratic principle of the public’s right to know.

The two raids by the Australian Federal Police (AFP) on journalists and media organisations represent a disturbing attempt to normalise the persecution and prosecution of whistleblowers seeking to expose wrongdoing.

They suggest that no media organisation is immune from government attacks on press freedom.

For journalists, there is nothing more important to our profession than the freedom of the press. Without it, we cannot effectively perform our jobs of keeping the public informed and holding the powerful to account to the Australians they serve. Without press freedom, we cannot protect the whistleblowers who seek us out to tell their stories or report matters that are in the national interest.

There has been a global outcry over the raids and the threat they represent to Australian democracy.

Journalism is not a crime. But what happens if the public are kept in the dark because whistleblowers are too intimidated to reveal the truth and investigative journalists are charged for simply doing their job?

Read MEAA’s report on the state of press freedom in Australia for more information: www.pressfreedom.org.au 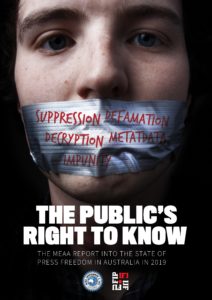 The Public’s Right To Know – the MEAA Report into the state of Press Freedom in Australia in 2019, is available online.

You can also download a PDF of the full report here.

Fairfax political editor Mark Kenny: “Democracy itself is at stake here if freedoms that have existed, that have underpinned the democratic system, continue to be crimped.”