The A.B.C. of adequate funding 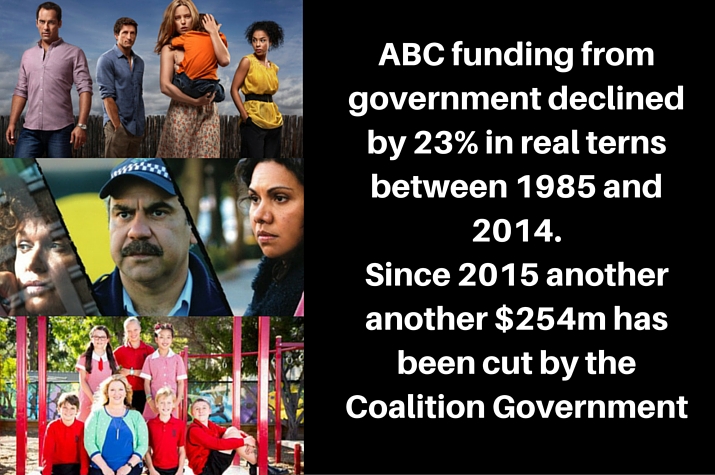 Whether it’s entertaining or educating our children on Playschool, making us laugh with Utopia, providing a soundtrack to the weekends on GrandStand or keeping us informed with news from home and away, the ABC is a public institution we couldn’t do without.

The ABC’s funding has been in decline in real terms for three decades under governments of both political persuasions, but it has worsened in the past couple of years.

Since the 2014 Budget, the ABC has had $254 million cut from its core operating funding, which has forced some difficult cuts including:

• The loss of 400 jobs with more than 100 still on the chopping block
• The closure of ABC TV’s production unit in Adelaide.
• The axing of local-state based editions of 7.30
• Morning programming changes on ABC regional radio stations

More facts about the ABC can be found here.

Negotiations are currently underway to determine the ABC’s funding for the next three years.

After the funding and job cuts under the Liberal-National Coalition government this is the best chance to fix the ABC and set it on a sustainable path as the national broadcaster for all of Australia in the digital age.

The government needs to hear loud and clear how important the ABC is to all of us and why it needs its funding restored.

Otherwise the ABC will face an unenviable choice: more cuts to programs and services, or commercialisation as a new revenue stream, including TV and radio advertising and pay-per-view for iview. And that’s no choice at all.

Please take the time to email your MP to and demand that the Turnbull Government restores ABC funding to a sustainable level, starting with this year’s Budget.