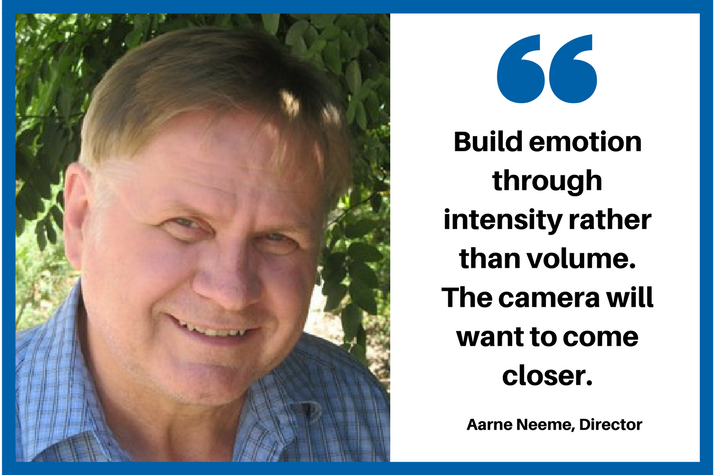 Aarne Neeme has been involved in professional theatre since 1962 and as a director since 1969. He has also worked as a teacher in both academic and vocational schools, most notably as Head of Theatre Dept at WAAPA 1984-9. Since 2001, Aarne has also been involved in television directing, and have worked on Blue Heelers, All Saints, MDA, Out of the Blue, Neighbours, and Home and Away.

1.Acting size relates to shot size. Use what can be seen in the frame.
Relative stillness will work for a close-up, but not for a full shot.

2.Camera position is no indicator of size - dependent on the lens being used.
But boom position is! If in doubt ask the cameraman, not the director.

3.Hitting the mark is vital for frame, focus and lighting.

4.Work out your business with props and actions, to illuminate your thought changes.
Then repeat exactly from take to take for continuity in editing.

5.Reaction is as important as action.
Not saying anything requires as much justification as when you do.

6.React before you speak. And editors will love you!
As they will have something to cut to, before the other actor stops talking.

7.Build emotion through intensity rather than volume.
The camera will want to come closer.

8.Balance your voice volume to that of the regular cast.
Or to the real distance between actors.
"Over Acting" is almost always due to using the theatre voice.

9.Talk relatively fast, and move relatively slowly.
You don't have to project to the microphone, and the camera can follow you more smoothly.

10.Never stop until "Cut!"
Give yourself something to do after the scene ends.