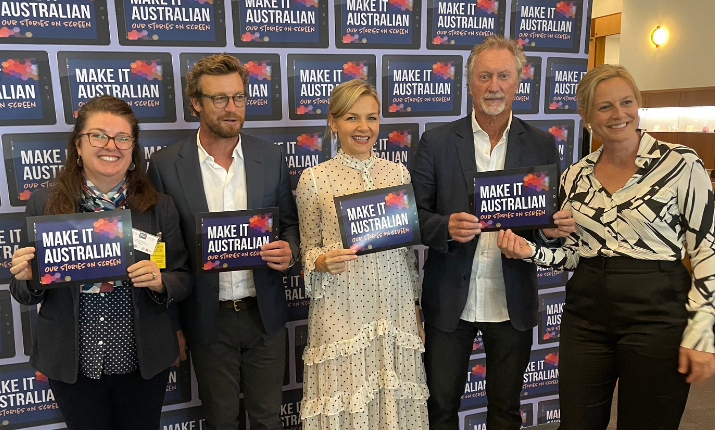 Leading Australian actors, crew, writers and producers are in Canberra this week in a united push to convince Parliament to introduce local content requirements for booming digital viewing platforms and make other necessary reforms to ensure a bright future for Australian screen stories.

The visit is part of the Make It Australian campaign backed by MEAA, the Australian Directors’ Guild, Australian Writers’ Guild, and Screen Producers Australia.

The industry is proposing that the major streaming platforms should be required to spend 20% of their local revenue on new Australian drama, documentary and children’s content.

“This proposal would create a wealth of new Australian stories, delivered to audiences on the platforms they are using every day,” said Shane Brennan, President of the Australian Writers’ Guild.

“A requirement of 20% follows similar precedents set in France and Canada for streaming platforms. It would create up to 10,000 sustainable local jobs and would unleash the potential of the local industry, which would, over time, double in size,” said Matthew Deaner, CEO of Screen Producers Australia.

“The industry is calling on the Government to act with urgency in the wake of its Media Reform Green Paper,” said Paul Murphy, CEO of the Media, Entertainment and Arts Alliance. “The Government’s staged process of media reform is incomplete; having made drastic cuts to Australian drama, kids and documentary content on commercial free-to-air and subscription television, there is an urgent need to ensure that streaming platforms are making up those losses to avoid a damaging contraction in the local screen sector.”

The screen sector is also calling for reconsideration of the Government’s announced changes to the tax offsets, which since their introduction in 2007 have supported the creation of a treasure trove of iconic Australian stories.

“Cuts to offsets for feature films and other eligibility changes will mean support is switched off for many in our industry, right at the time when Australian stories are doing so well at the box office and on the small screen,” said McAusland.

“In particular, the reduction of the rate of offset from 40% to 30% could prevent films like The Dry, Penguin Bloom and High Ground – the summer’s box office success stories - from being financed in future. While the Government has announced two years of additional funding for Screen Australia, it’s little more than a stopgap that won’t make up for the permanent loss in funding,” said Brennan.

“The changes will also have dire impacts for documentary-makers, and a range of other local productions that use the Post, Digital and Visual Effects Offset, with cascading impacts on jobs, businesses, audiences and broadcasters,” said Deaner.

The changes will also have a heavy impact on smaller businesses and those operating outside capital cities. These are productions and businesses which provide real economic and employment benefits across the regions in way that the large international films coming here do not. Local films are also the lifeblood of regional cinemas, which are facing real economic challenge as a result of the pandemic.

“We need the Government to ensure that our stories are thriving and connecting Australians as our industry recovers from COVID and get ready to take on the world,” said Murphy.