Thursday’s decision by Facebook to unilaterally ban news on hundreds of Australian pagesis the arrogant act of a company with too much power that thinks it is beyond the reach of any government.

Facebook is acting in retaliation to the proposed News Media Bargaining Code, which would force it and Google to compensate media outlets for content that until now has been published on their platforms for free.

While Australia’s News Media Bargaining Code is not a silver bullet to fix the problems within the news media, it is an important step to address the blatant imbalance between the digital giants and those who produce public interest news content.

Facebook was already under pressure for failing to do enough to stop the spread of misinformation and disinformation on its sites. Yet it has deliberately acted to remove reliable and credible news sites – including the many pages from freelance journalists – at a time when factual and credible journalism is more important than ever.

Those caught up in the ban also include many small and independent media outlets, including community radio stations and specialist publications.

In the 2018-19 financial year, Facebook and Google earned more than $5 billion in digital advertising in Australia while only paying $117 million in tax. Meanwhile media companies have struggled to keep journalists employed and newsrooms open. In the past decade, almost 5000 journalism jobs have disappeared in Australia.

Australian media outlets have had no choice but to publish on Facebook because it has an audience of more than 14 million in Australia. Until this irresponsible ban was implemented, about 40% of Australians regularly used Facebook to access news media.

Both Facebook and Google have been able to monetise the traffic generated by news content on their sites by collecting vast amounts of data about their users, and then digital advertising space.

So not only have they grabbed the lion’s share of the digital advertising market, depriving media outlets of revenue to fund journalism, but they do not contribute to the costs of the news content that brings traffic to Facebook and Google in the first place. 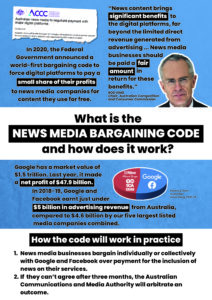 The News Media Bargaining Code seeks to redress this imbalance by bringing the digital platforms and media organisations together to negotiate commercial compensation for this content. Only if negotiations are unsuccessful does the prospect of arbitration come into play.

The News Media Bargaining Code is not a perfect piece of legislation.

We have consistently argued that any monies distributed via the code are allocated to the production of journalistic content and are not sucked up by executive salaries or shareholder dividends. This money needs to be spent in newsrooms, not wasted in boardrooms.

As working journalists, we must ask our employers how they intend to spend any money coming from the Mandatory Code or via side agreements such as the millions from Google that will start flowing into media organisations.

There also needs to be an emphasis on diversifying Australia’s media ownership – assisting new startups, supporting regional and community journalism and supporting the national newswire AAP and public broadcasting. You can find out more from MEAA’s recent submission to the Senate inquiry into media diversity.

The Code by itself won’t ensure the viability of Australian media.

MEAA would like to see other measures adopted for a sustainable media ecosystem – including tax concessions and direct support to small and independent start-ups.

This dispute has been portrayed as a battle of the titans, with the federal government and media companies on one side, and Facebook and Google on the other, and billions of dollars at stake.

But let’s remember that the most important issue at stake here is the future of Australian journalism and the communities our members serve. A weakened media is unhealthy for our democracy.