Save Our Stories campaign continues into 2016 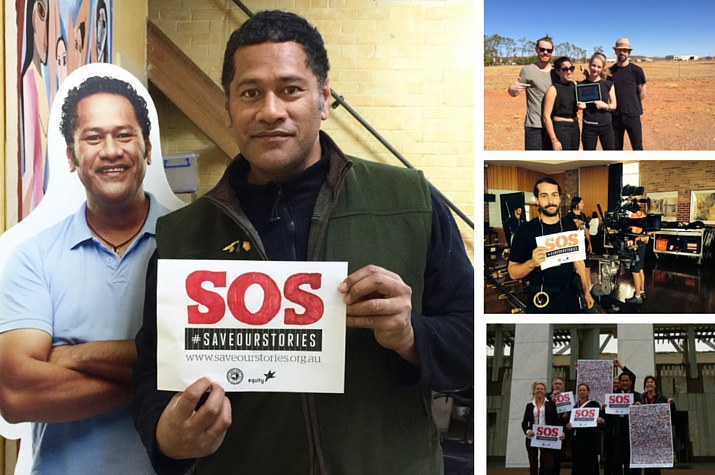 In 2016 MEAA will continue to campaign vigorously to protect local job opportunities for performers and crew.

A proposal to entirely scrap visa controls, which prompted thousands to join the Save our Stories campaign last year, is still under consideration by the Federal Government.

The visa regulations are based on the simple principle that productions made in Australia should endeavour to employ Australian cast and crew first.

Last year thousands of MEAA members across the country showed their support for these vital regulations. More than 2000 submitted a photo for a visual petition and wrote a message about why they support local jobs and stories, which were delivered to high ranking Arts Ministry officials. Hundreds more attended meetings, rallies and lobbying efforts in Canberra.

Currently producers must satisfy the Arts Department that films subsidised by Australian taxpayers have at least 50% of lead roles and 75% of support roles filled by Australian performers and that reasonable efforts have been made to cast Australians for all roles.

MEAA CEO Paul Murphy said no evidence has been put forward that making these changes would benefit the local industry, nor that they have delayed or hindered productions.
“The real issue here is why the federal government wants to change these regulations against all advice that they are important for the preservation and creation of employment opportunities for Australian creative professionals.” said Murphy.

MEAA is consulted when an application to import foreign cast or crew is made. MEAA’s role is to provide a level of scrutiny to the casting proposals of producers to enable the Arts Minister to be certain that the Foreign Actors Guidelines have been met before issuing a certificate to the production.

MEAA will check whether a proper casting process has been carried out and flag concerns if opportunities are being denied to Australians. The success of the industry and Australian productions is our priority.

The union cannot veto an application to work in Australia but has an “opportunity to respond” within the strict window of five days for a technician’s application and 14 days for a screen actor.

Following discussions last year, Labor, the Greens and several crossbench Senators shared MEAA's concerns and expressed support for the Save our Stories campaign.

“If Australian dollars are being invested in a production, there should be a guarantee of Australian jobs. While the government has gone silent on the issue in recent months, we remain watchful and will continue to campaign to save our stories.” said Murphy.

Find out more about the Save or Stories campaign here.