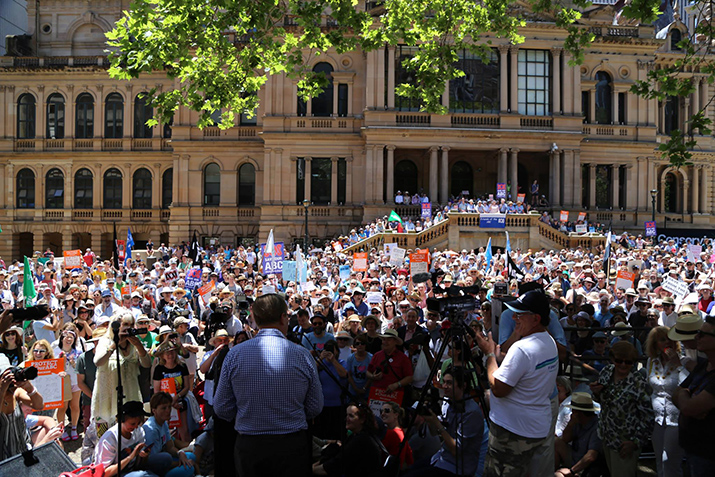 MEAA Media member and former ABC staff-elected director Quentin Dempster addressing a save the ABC rally in Sydney in late-2014.

Take action by emailing your MP for a better funding deal for the ABC.

For more than 80 years, the ABC has been a trusted and respected source of news, current affairs, drama, comedy, music and more, giving a voice and platform to tell Australian stories.

Whether it is watching Play School as a child, debating Triple J’s Hottest 100 with friends, tuning into our favourite radio programs or keeping up-to-date with the latest news and current affairs, the ABC plays a pivotal role in informing and shaping our views about Australian life and contributing to our sense of nation identity.

The ABC also provides employment – directly or indirectly – to thousands of MEAA members.

Yet for too long the ABC has been taken for granted, receiving less and less funding from government while providing more services than ever before as new technology has evolved.

Today, the ABC delivers content across four television channels, online, to your mobile device or digital radio. The ABC keeps communities informed in a crisis, through our vital national emergency broadcast service. We expect the ABC to deliver its suite of services to us wherever we are, whenever we need it.

When the ABC is required to do so much more with less, it’s inevitable the cracks start to show.

We all love the ABC. We are proud of what the ABC represents in Australian lives. But the rate of technological progress has far outstripped the funding made available by successive federal governments. That means it’s getting progressively harder to maintain a strong ABC now and for the next generation of Australians.

The ABC’s “make-do” solutions to the chronic massive underfunding crisis are unsustainable.

Negotiations are currently underway to determine the ABC’s funding for the next three years.

After the savage funding and job cuts under the Liberal-National Coalition government — which total $254 million in reduced funding and about 400 job losses — this is the best chance to fix the ABC and set it on a sustainable path as the national broadcaster for all of Australia in the digital age.

Hands Off Our ABC is a community and advocacy campaign co-ordinated by the two unions that represent the vast bulk of employees at the ABC: the Media, Entertainment & Arts Alliance and the Community and Public Sector Union.

Our goal is an editorially-independent ABC that is fully-funded by the government and meets its charter as a comprehensive national broadcaster,  that is resourced to tell Australian stories across multiple platforms, and positioned to take advantage of new technology to retain its position as the most trusted and reliable source of news and entertainment in Australia.

The campaign will be gaining momentum through the 2016, beginning with a major push for a better triennial funding arrangement.

TAKE ACTION: email your MP and demanding that the Turnbull Government restores ABC funding to sustainable level, starting with this year’s federal Budget.