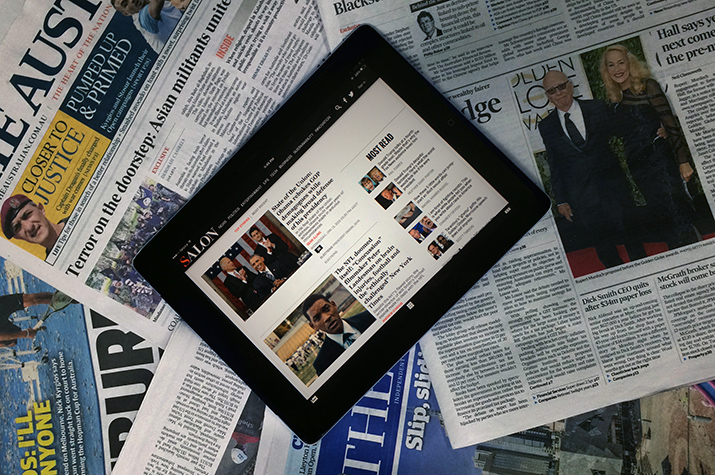 Journalists working for digital media companies in the US are starting to organise into unions to campaign for better pay and conditions. Could Australia be next? Nicholas McCallum reports

ONE weekend in early fall, we headed for Louisville in Kentucky. There was a national gun show, a meeting of a Jane Austen literary society, and an Iron Man meeting – but sadly we weren't there for any of those.

We were all media workers. We came from across the United States, from Canada and from places as far flung as Israel and Australia. We wanted to build a global movement, one of solidarity. In an increasingly fractured work environment where the definitions of work time and place are stretched, we wanted to how today's media workers can come together.

Unionisation was starting to catch fire in the US digital media industry. The workforce of Gawker Media was the first to vote to unionise in June. The Guardian, Vice Media, Al Jazeera and Salon followed suit with Huffington Post announcing it planned to do the same (in early December an “overwhelming majority” of HuffPo staff voted to unionise, signing on with the Writers Guild of America, East). The fire was spreading fast through North America’s digital newsrooms.

MEAA sent someone along to this ‘Nationwide Convergence to Organize Digital Media’ in Louisville in early-October to see if they could bring some of that fire back to Australia.

As digital newsrooms in the US cleaved to unionism, it offered some hope that Australians would follow suit within time. What were the methods we could adopt to replicate their success? Could they be grafted on or would they need to be adapted? Some of these questions and more were already answered.

For journalists there is a need to stay jacked into the ceaseless news cycle at all hours of the day. The need to build and maintain a personal online brand is crucial for all journalists and producers, and you need to do it in your own time.  Some editors might use this as a means of control, but it is hardly a recent aspect of working in media; it's just the digital extension of networking.

Job titles too are becoming less relevant as roles spread and workers are implored to do more tasks beyond their job description. This was something most people at the conference agreed upon, but as seasoned reporter turned full-time union organiser with the Newspaper Guild of America Lou Grieco noted: “It’s been that way for 100 years”. He said journalists especially need to remember they are in a “business relationship” with their employers.

“Working in media as a journalist is a ‘labour of love’, but bosses now have new ways of exploiting that labour,” Grieco said, reminding his younger colleagues not to buy into the argument. “It's not a calling – it's a job.”

The former courts reporter at the Dayton Daily News acknowledged editors are “squeezed at both sides” as they try to please and appease their employers and employees, but he affirmed it was their job to manage their workers.

“Make them manage you. Don't buy into the ‘Don't you want to be here?’ argument.”

Former labour reporter at Politico, Mike Elk put this down to a survivor mentality mixed with unwarranted sense of gratitude. “They are seen as survivors,” he said about the lucky few who landed jobs in the industry while J-school colleagues “got shot on the beach”.

The good and bad sides of technology

As technology has made our lives easier, Grieco pointed out it’s also made our working lives harder and more arduous. Workers are now lashed to their jobs via their smartphones, bringing the ever-watchful eyes of Big Brother bosses who can monitor all workers – not only those who organise.

“As union president I felt I had a target on my back,” said Greico. “A friend said just because you're paranoid doesn’t mean it isn’t true.” Bosses are indeed watching.

Actively organising a work place is enough to put you offside with your employers –  or worse, as anyone who has held the role of union organiser will likely tell you.

To a much greater extent than in Australia, the risks of carrying the union standard in the US can manifest in the loss of employment. While Australia’s unfair dismissal laws protect workers from sudden termination, many US states have “at will” industrial laws that allow employers to fire workers without need for “just cause”.

You can be sacked instantly, simply because “you don't fit the team”. A union organiser might not fit the team as a boss sees it, but it is unlikely they would say so explicitly as a justification for marching orders.

In her excellent piece on digital journalists moving toward unions, freelance writer Colette Shade exposed a flaw in BuzzFeed CEO Jonah Peretti’s insistence that his workplace was some kind of utopia.

“A lot of the best new-economy companies are environments where there’s an alliance between managers and employees,” Peretti was quoted in the piece as saying, adding that unionised workplaces are “adversarial” and outdated.

But Shade obtained a copy of a BuzzFeed US employment contract which states: “The Company has the right to terminate my employment at will, at any time, for any or no reason, with or without cause." Seems like a pretty tepid alliance.

Speaking via phone at the conference, Gawker Media senior writer Adam Clark Estes – who led the union charge – admitted that there was no “just cause” provision included in their agreement when they signed on with the Writers Guild of America East in June. The revelation left many in the room stunned, especially Elk.

Like Clark Estes, Elk tried to push unionism at the conservative-leaning Politico but his relationship with his employers soured. Never afraid to speak his mind, Elk – a member of the Washington-Baltimore Newspaper Guild – said the failure to secure a just cause provision for Gawker workers was an indictment on the guild, which he dismissed as being more concerned with drumming up numbers than getting what was best for them. 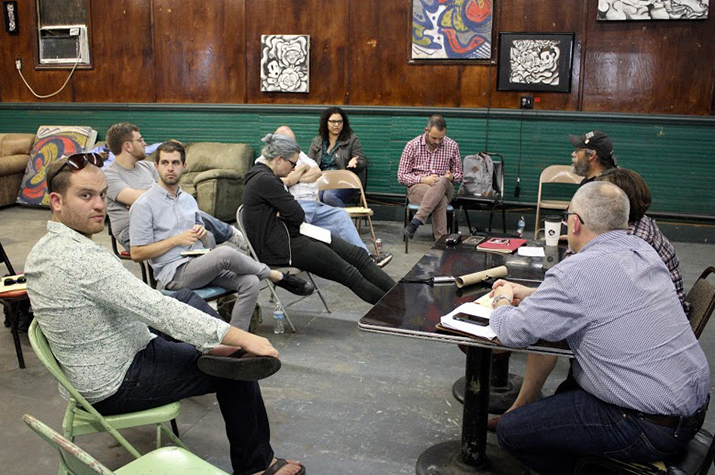 There seems a cold turf war between the Writers Guild and the Newspaper Guild as they push into the digital realm.

But below the surface to each union being broken up into “locals” that have their own levels of government. This is one of the idiosyncrasies of America’s labour movement, which ironically mimics the conservative view of small, localised governance. Fortunately Australian media professionals do not have to contend with fractured unions and chapters in the same way; long live the monolithic MEAA.

Elk was always open with his union push at Politico. The fact that his tongue-in-cheek emails and back-and-forth with bosses was so widely covered in the US press speaks loudly about how different labour relations between there and Australia where union drives barely rate a mention.

A former organiser, Elk was forward with his former colleagues about how much more collective bargaining would be than a snack bar. (Politico provided a free snack bar to appease their writers while Elk was trying to drum up union support. On the surface free food is not a bad thing at work, but the underlying benefit to the bosses is workers can grab their free lunches quickly and return to work at their desks – no need to leave the office!).

Ostensibly Elks’ departure from Politico had nothing to do with his union drive from a distance, but from a distance it is impossible to say it did not play a factor in the separation either.

Following in its New York HQ’s footsteps, Vice Media’s Toronto office was swaying toward unionisation with Tanarra Yelland taking a leading role. They were negotiating with the Canadian Media Guild, representing 6000 members across the industry. Not only were they pushing toward solidarity, they were also flirting with unionising with a department once seen as the enemy – advertising.

Long gone are the days when there was an impenetrable wall between the advertising and editorial. In many newsrooms the two are almost working side-by-side. In their Toronto push, Yelland and others floated the idea of bringing the marketing team aboard for practical reasons in a globally expanding media empire like Vice.

Though seldom used, one of the greatest weapons in the workers’ arsenal is strike action. But when content can be fed from around the world the weapon’s effect is diminished – especially if localised advertising can so easily be dressed up around the content. This would have been anathema to the newsroom once upon a time.

Organising in digital newsrooms is markedly different to our “dead tree media” forefathers, with many differences surrounding fluid titles and roles.

“Workers cross from roles, a video producer who wants to write something – where do they fit?” Yelland asked of the growing number of factotum news-media workers who might not see themselves as journalists necessarily and therefore wonder whether a journalists’ union is for them.

“They do want a voice,” she said. “They see the benefits, but don’t want to get stuck with a newspaper contract.”

Along with the ethical issues surrounding the advertorial marriage, many young people have further ethical concerns with being aligned with the traditional labour movement when political issues should be viewed objectively and at arm’s length.

Larry Williams, a union organiser of nine years from Washington DC, said workers are ambivalent in their views toward unions.

The co-founder of internet startup Unionbase.org, Williams said there was no excuse for unions not seeking workers out who want to bargain collectively.

He helped create a simple web portal for people who are wondering which union is the right one to represent them when there might be uncertainty about which industry you work in or ambiguity about your role. But he says it falls on unions to find potential members.

“If you are looking for the union and the union does not find you, that’s a problem,” he said.

Unionbase.org is mimicking the streamlined delivery of digital media for organising, with the ultimate goal of bring together the America’s atomised unions in a “virtual union movement” – a movement without boundaries and a potentially global expanse.

Australia’s digital newsrooms are likely not far behind the US in a move toward greater union membership.

Numbers are far below their apex of the newspaper days, but it will take only a few sparks in a few offices for the fire to spread. This could be fanned by current union members seeking to address modern-day concerns that new media workers might face union in an industry experiencing spasms of job losses and technological changes.

The answers could be found more easily with more members and more voices, so it falls on current members to spread the word. It only requires some face-to-face conversations. Getting digital media workers away from their desks or smartphones, and therein lies the rub.

POSTSCRIPT: On January 14, the management of Huffington Post in the USA voluntarily agreed to recognise employees’ desire to unionise with the Writers Guild of America, East. It is the largest digital media outlet in the US to unionise, with about 265 employees in the bargaining unit.

Nicholas McCallum is a digital journalist at Yahoo! Seven News. He attended the Nationwide Convergence to Organize Digital Media conference on behalf of MEAA. He tweets at @nkmccallum