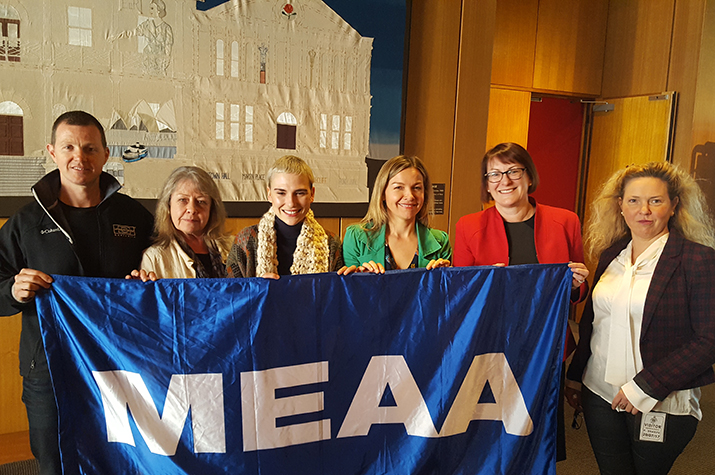 Leading Australian actors and screen technicians have today appeared before the Parliamentary inquiry into the future of the film and TV industry to urge greater government support and leadership in the sector.

Equity director Zoe Angus said today was an important opportunity for politicians to hear from the people who work in the industry every day and understand exactly what’s at stake when we talk about the future of film and TV.

“Our actors and crew are recognised as being among the best in the world,” she said. “Now, we need to make sure our industry continues to grow and prosper. Support for local content, adequate levels of government funding and competitive tax incentives are some of the many factors that impact screen production levels.”

MEAA’s written submission to the Parliamentary inquiry was based on feedback and comment from more than 150 workers in the industry.

SFX Supervisor Dan Oliver said: “We told the committee that we need to encourage international films to come to Australia by putting us on a level playing field with other countries via government offsets. International productions provide not just short-term employment, but opportunities to build skills, train new workers, and invest in equipment that can then be used by Australian productions.”

Actor Justine Clarke said: “The content quotas, particularly for children, should be kept up and spread across new media platforms, such as Netflix and Stan because at the moment they have no obligations. We really wanted to highlight that for the Inquiry.”

Adele Perovic said: “It is time to give television and digital the same incentives as feature films by increasing the producer offset and making it platform neutral. We also need to increase government funding to ABC, SBS and Screen Australia and reverse the terrible cuts of recent years.”

Noni Hazlehurst said: “This is part of an ongoing campaign to grow and sustain our industry. It is important that politicians hear directly from people who work in film and TV, to give them a reality check about what it’s like to survive in this industry in order to tell the stories that resonate so strongly around the world.”