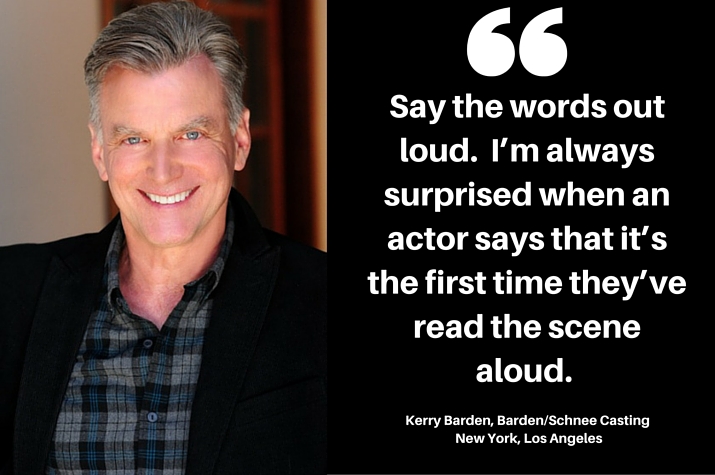 Kerry has cast over 200 films and television shows, including, most notably, Boy’s Don’t Cry, American Psycho, The House of Mirth, Still Alice, Dallas Buyers Club and The Help to name a few. As a producer, his credits include the award winning Conversations With Other Women with Aaron Eckhart and Helena Bonham Carter and the musical, Temptation starring Zoe Saldana and Michael Cerveris. Kerry divides his time between Barden/Schnee’s Los Angeles and New York offices.

1. First of all, be prepared. Be familiar with the sides that have been given for the audition purpose. Ask any questions you may have so that you have the bigger picture of the character’s life and relationship to the story and the other characters.

2. Say the words out loud. I’m always surprised when an actor says that it’s the first time they’ve read the scene aloud. It’s the best way to get the rhythms of the scene and find beats within the dialogue that may come as a surprise.

3. Be on time. And if you are not feeling well or don’t feel like you’ve had enough time with the material, ask to be rescheduled.

4. Find a way to make the scene feel natural and fluid. We don’t have prepared speeches in life unless we are addressing a group so any scene should feel fresh and alive.

5. Find a way to connect with the character. If it’s a period piece, do some research. If you’re educated and an upscale professional, figure out what that job and training entails. Same with working class or disenfranchised. No need to dress in a costume, but do wear something that makes you feel in the world of the person you are exploring.

6. Take a deep breath. Remember that everyone is on your side and supporting your success so that the role can be cast and we can start building the story.

7. Enjoy the process of diving into a character. It’s a great opportunity to act every time you have an audition. If you don’t book the job, at least you will have been able to work on your art.

8. We’ve all chosen this profession and it’s a great privilege to be able to be a part of this industry. No one forced any of us into the film and theatre business so remember that. It should be something that feeds your soul, even if it drains you emotionally. And it should be fun, for the most part.

9. Every job is a collaboration, so make sure you listen to whomever is in the room with you, the casting director, director, producers, etc. Also remember to engage with the reader as much as your character should.

10. Be ready to make anyone reading opposite you fit the dynamic of the scene since the reader won’t always be ideal for the other character.