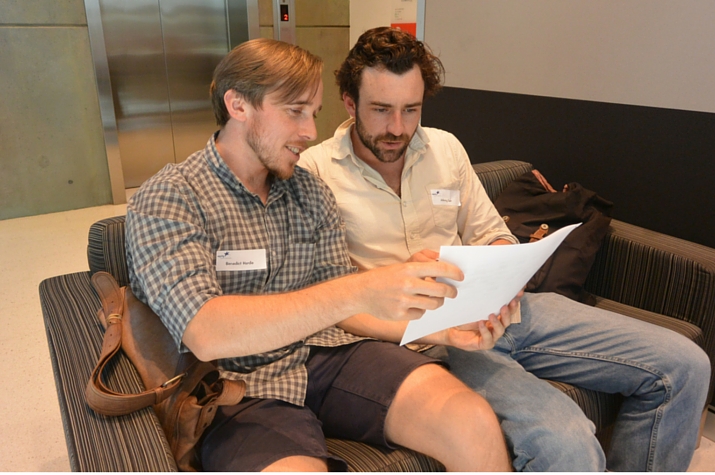 Andrea Moor shares her tips for breaking down a script.

Andrea Moor is an actor, theatre director, teacher and voice over artist. Her long list of acting credits include productions with Sydney Theatre Company, Griffin, The Ensemble, Queensland Theatre Company, Melbourne Theatre Company, Playbox, State Theatre Company of SA and La Boite. Film credits include Mental, Oscar and Lucinda, Man Who Sued God, Subdivision, Nim’s Island 2, Strange Planet, Over the Hill and Travelling North. Andrea was also responsible for introducing the acting technique Practical Aesthetics to Australia. As a voice over artist Andrea has worked extensively in radio at Radio National and in many State and National advertising campaigns. Andrea has been a proud member of MEAAAEquity since 1980.

1.Read the play/screenplay as many times as you can and then a few more times.
2.Practice the art of being objective. Read the play as an audience would – don’t think about your role at all! Read it to understand the writer.
3.Ask some basic questions:
a.What is the play about?
b.Who’s the protagonist?
c.What makes me care about this play?
d.Why would I want to see this play?
e.If I were directing the play what would be my take home message?
4.Make notes of everything that’s said about your character by others and everything your character says about themselves.
5.Break the play down into bite sized chunks – scenes or beats (bits!) to help you deal with a unit of action and not the whole play.
6.Determine some basic givens of the scene – who, what, when where and why? And research where applicable.
a.Who is my character in relationship to everyone else in the scene?
b.What is my character doing in this scene?
c.When is it – time of day/year/historical setting?
d.Where is the character? What is my character’s relationship to the space?
e.Why has the writer put my character in this scene?
7.In each scene: What is my character literally doing in this scene? Make this objective and non interpretive. This statement should read as a basic description of the character’s purpose in the scene. It shouldn’t tell you how you are going to play the scene.
8.What does my character want? What’s the characters objective in the scene? If my character were writing the scene what would they have the other characters say and do? This is a failsafe way to arrive at your character’s intention.
9.Now you need to find a way to play that objective – some actors like to personlise the objective by imagining themselves in that situation and then finding a personlisation from that. I like to ask myself what can I do to get that objective for the character. So I might find a scene action that informs the objective and tells me the exact dynamic of that objective. My scene action will also be very active so I will be ‘doing’ something in the scene rather than trying to ‘get’ something. It’s all about having lots of options to take into rehearsal or on set. My focus will be on the other actors and not on myself – hopefully!
10.Personalisation is everything and every actor uses a different way in. I remember teachers saying to me that the work ‘has to cost you something’. This is where my own connection to what’s going on in the scene is the difference between presenting the character in a situation and actually allowing the audience into a lived situation. For me the personalization has little to do with the experience that the character is going through but everything to do with how I relate today to what the character is trying to achieve. So I’m not concerned with the given circumstances – the audience knows all that – I am concerned with the very essence of what I’m doing. If I’m trying to get an apology or putting someone in their place or begging forgiveness I ask myself what it really means to me today to get those things. So I find what I can relate to in my life that will inform the ‘doing’ in the scene. This is taken from the acting technique Practical Aesthetics and has been the key to opening up a wealth of vulnerability and possibility that was very tricky for me to find honestly in the past.