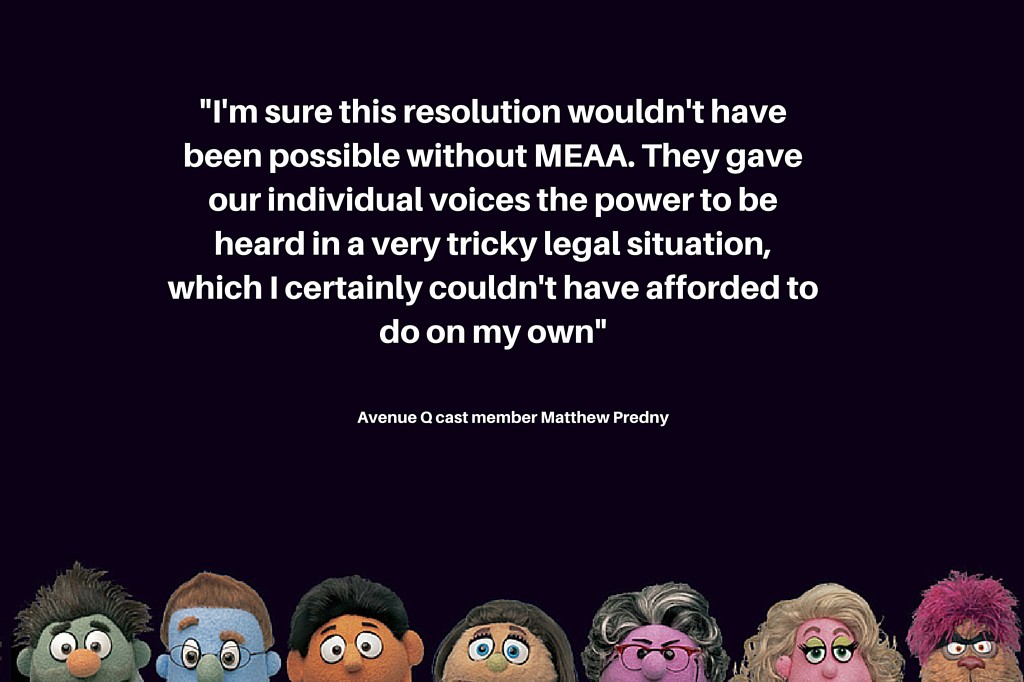 Twelve performers on the satirical musical Avenue Q have finally been paid after MEAA took legal action to recover $114,000 that was owed to them.

The performers turned to their union after the money was frozen during a legal dispute between the show’s producer and his ex-employer.

The majority of cast and crew who worked on the production, which had a successful three week run at the Enmore Theatre in Sydney earlier this year, were not fully paid for their work.

MEAA joined proceedings in the Supreme Court in August and MEAA’s legal team successfully argued that the frozen funds should be used to cover unpaid wages. The matter was settled out of court this week.

For Avenue Q cast member Julia Dray, who was among those to receive unpaid wages, the experience was a learning curve about the nature of the entertainment industry and her rights as a performer.

“I had a wonderful time working with the company on this production and I don't think any of us could have predicted the situation that has since unravelled. It was a difficult period, full of uncertainty, and it has opened my eyes to the tenuous nature of the career we have chosen. However, I will take from this experience a new appreciation for MEAA and all that the union stands for.”

“I'm sure this resolution wouldn't have been possible without MEAA. They gave our individual voices the power to be heard in a very tricky legal situation, which I certainly couldn't have afforded to do on my own. I owe so much to Victoria Houston and the whole MEAA team who turned this nightmare around.”

“I called Equity for advice and they jumped onto it straight away.  I remember wondering when I graduated drama school if it was worth becoming an MEAA member. Is it worth the money? What am I paying for? Will I see any benefit? It's because of our union that we enjoy great conditions and fair wages When things get hairy like they did on Avenue Q, you need someone in your corner who can make a difference. “

MEAA CEO Paul Murphy said the union had been determined to see justice done for i members, who were part of the wider cast and crew on the production.

“These performers were caught in the crossfire of an unrelated legal action,” he said.“We are glad that the issue has been resolved and our members have finally been paid for their contribution to a successful show.”