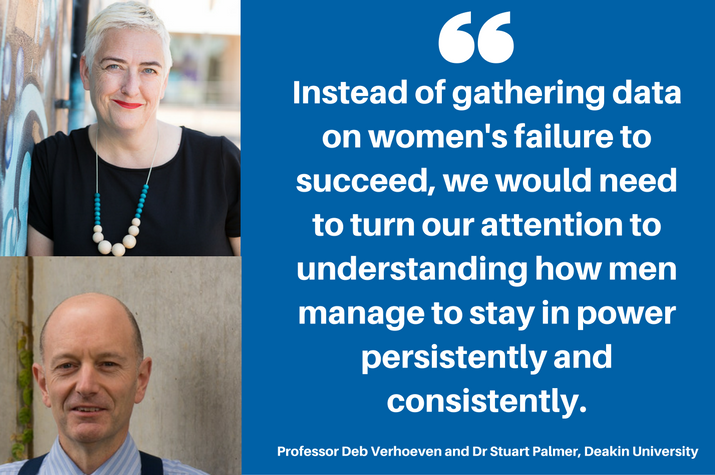 Our film industry is a highly resilient system of gatekeeping designed to maintain men’s dominance. The data tells us so, write Deb Verhoeven and Stuart Palmer. This is an edited extract of an article will appear in the Summer 2016 issue of The Equity Magazine.

It’s coming up for a year since the announcement of the Gender Matters initiative, a government-led attempt to improve the position of women in the Australian screen industries. As with any anniversary, there will be the obligatory backslapping. After all, dollars were spent and project development applications were submitted in record numbers.

Like all previous, and ultimately unsuccessful attempts to address gender inequality in the film industry, Gender Matters is based on the idea that it is women who are somehow remedial and require extra support and assistance to participate in equal numbers. The operating assumption is that there is nothing wrong with the system per se but rather that women just can't get it right.

To support this view, reams of statistics revealing just how poorly women perform in the film industry have been released across a range of national film jurisdictions. These statistics are copious. They come from all directions. And most importantly, they aren't getting better. Year after year, equity for women has proved elusive.

Moreover, the constant reminders that women haven’t achieved parity in the film industry, since the beginning of data collection, have had the cumulative effect of reiterating an operative sense of powerlessness in the face of overwhelming evidence. It seems, the data tells us, that most policy interventions are doomed and women are historically entirely incapable of realising their potential.

But perhaps we have been looking at the wrong problem. What happens if, instead of looking at the persistent "failures" of women to achieve equity, we look instead at the film industry as a highly resilient system of gatekeeping designed to keep men in a position of dominance. Male dominance of the film industry has persisted since statistics have been kept. And the data tells us that their industrial ascendancy has not waned.

What if women were not the problem that needed to be addressed and we recast the problem as a preponderance of men? What if we gave as much attention to understanding male behaviours in the film industry as we have given to the evident lack of women? What if the key to achieving statistical equivalence wasn't more women but fewer men?

If we begin from this revised basis, not only would we need to change the focus of our analyses but also the evidence used to substantiate them. Instead of gathering data on women's failure to succeed, we would need to turn our attention to understanding how men manage to stay in power persistently and consistently.

And that is what we have done.

We took film industry data and examined it to show how men have managed the creative networks of the film industry to their advantage. We based our analysis on the key creative credits (producer, writer, director) provided by all feature drama films submitted to the AFI/AACTA awards over 10 years (2006-2015). From this data, we can see very clearly how men in the film industry prefer to work with each other. According to this dataset, a total of 89 men (around 40% of all male producers) did not work with a single woman in a key creative role over a ten-year period. Seventy-five per cent of all male producers worked with none or one woman in a key creative role. 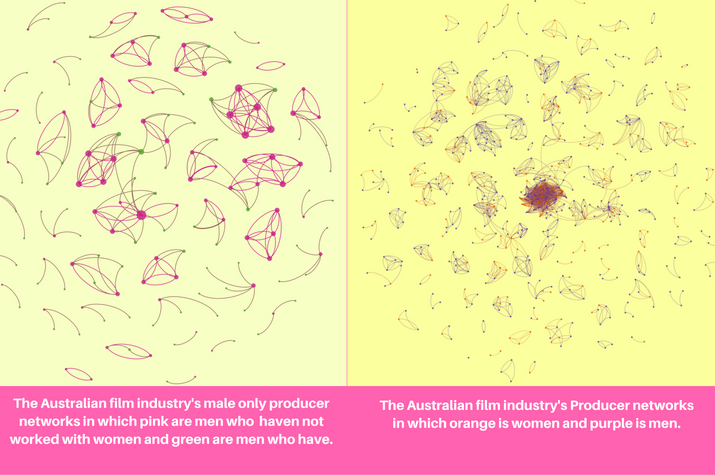 Mostly, however, these statistics are simply telling us what we already know. That gender equity in the film industry is a longstanding and seemingly intransigent problem of epic proportions. However, using a technique called Social Network Analysis (SNA), coupled with our focus on dominant male cultures, we have been able to use the evidence at hand to do more than just describe, interpret and analyse. Instead we have used this data to demonstrate the network effect of “gender offender” behaviours in order to spark new approaches to change and to point to other ways forward (see figure 1).

Criminal Network Analysis is a subset of Social Network Analysis, which has been used to make strategic interventions that undermine the dominance of particular social groups. This technique has been used by police and counter-terrorism agencies, for example, to specifically identify how drug cartels and terrorist networks cohere and how they can be most efficiently fragmented. This technique can also be applied to other forms of dominant social behaviour, such as the film industry’s male-only creative networks.

Using Criminal Network Analysis, for example, we can identify which individual producers have the most influence throughout a network. We can also statistically measure how significant specific male producers are to maintaining the cohesion of male dominance in the industry and exactly how much impact their absence would have in terms of fragmenting the network.

The film industry is built on creative relationships and networks. It’s time we recognised how these creative networks have successfully supported male dominance for a very long time. And it’s time to make the necessary interventions that will produce better results for women and others. This is no longer about levelling the turf. This is about turfing the levelling mechanisms that afford women up to a 30 per cent share of the industry and no more. We have the data. Let’s use it more effectively.

Deb Verhoeven is professor and chair of media and communication at Deakin University. She is director of the Kinomatics project, a multidisciplinary "big data" initiative that develops innovative techniques to analyse the film industry at a global scale.

Dr Stuart Palmer is an associate professor in the faculty of science, engineering and built environment at Deakin University in Melbourne. His research interests include computer image analysis, the use of digital/online technologies in learning and teaching, and social media data analysis and visualisation.