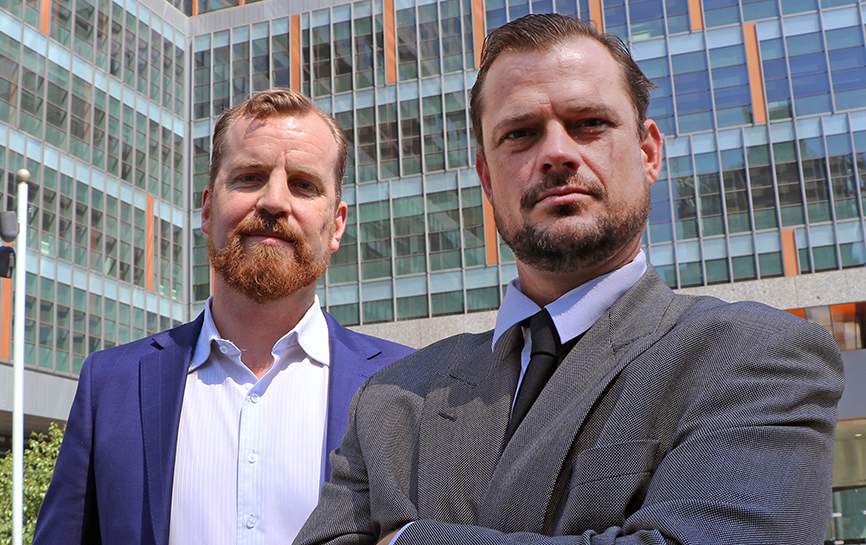 Equity members Soren Jensen (left) and Chris Palframan outside the Federal Court. Along with fellow performer Jean Godwin, they claim they should have been engaged by Cultural Infusion as employees, not independent contractors.

An appeal hearing in the Federal Court will help to clarify whether actors engaged on long-running shows are employees or independent contractors.

MEAA has lodged the appeal on behalf of three performers who were employed by Cultural Infusion (International) Pty Ltd and its chief executive officer and founder Peter Mousaferiadis as independent contractors in 2015.

The union argues the workers were engaged under a sham contracting arrangement which underpaid them by between $18,000 and $20,000 each, and they should instead have been deemed as casual employees.

The appeal, against a decision of the Federal Circuit Court in June last year, was heard before Justice Michael Wheelahan in Melbourne on March 14.

The union took up the case after the Fair Work Ombudsman wrote to Cultural Infusion in 2017 to warn the company that the arrangement appeared to be sham contracting and the company should pay the performers what they were entitled to as casual employees.

The three performers were engaged by Cultural Infusion to act in ‘Anzac Centenary Roadshow’, a theatrical interpretation of the Anzac story which was toured in high schools and RSL’s around Victoria in 2015 - 2016.

They typically had nine performances over a fortnight for about 20 hours work.

The workers were employed under 12 month contracts, without any paid leave, superannuation or workers’ compensation. Cultural Infusion later agreed to pay their superannuation, but when the workers further questioned their employment status, they were dismissed.

“We will be arguing that these three performers were fully under the control and direction of Cultural Infusion and its founder Peter Mousaferiadis, they had regular hours of work, and should have been treated as casual employees,” said the director of MEAA Equity, Zoe Angus.

“We will argue that Cultural Infusion set up this sham contracting arrangement to avoid its obligations to provide a number of workplace entitlements, including paid leave, overtime, and workers’ compensation insurance.

Ms Angus said if successful, the case would have important ramifications for the live performance industry by changing the employment status of actors engaged on long-running shows.