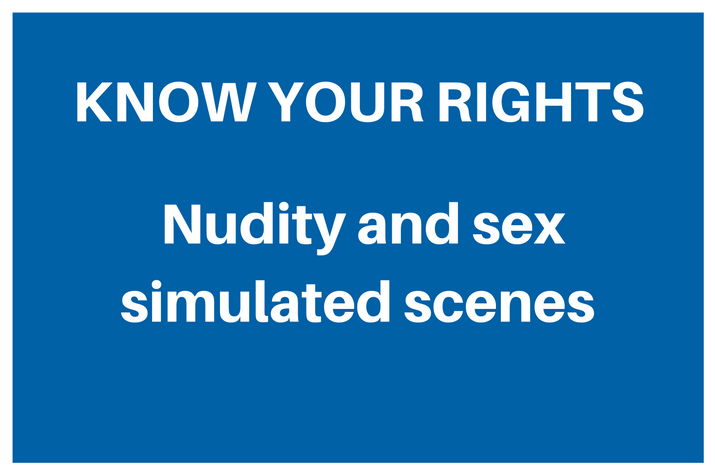 There are important Equity guidelines to be aware of when it comes to shooting scenes that involve nudity or sex scenes for a film or television production.

The Television and the Feature Film Agreements both provide the following:

(A) The Program, episode and scene where the nudity will be required;
(B) The extent of the nudity involved;
(C) The type of physical contact (if any) required in the scene;
(D) The nature of the wardrobe involved (if any) (see through clothes etc.); and any other relevant information requested by the Artist pertaining to the scene which may reasonably be expected to give full, true and complete disclosure and informed consent.

(b)Subject to Clause 43(c) the Producer may, for publicity purposes use stills or footage of the Artist appearing in scenes referred to in Clause 43(a) provided that the Artist's written consent to such usage has been obtained.
(c)Where a third party, including a television network, fails to comply with their contracts with the Producer in respect of the use of footage containing nudity or breaches the Producer’s copyright in relation to the program, the Producer will not be held to have breached clause 43(b) but will use all reasonable endeavours to have the third party breach rectified.
(d)No still photographs will be taken during the Rehearsal or filming of scenes where the Artist is required to appear nude, Semi-nude or in sex simulated scenes. A special still photographic session may be conducted immediately prior to or after the filming of such scenes, provided that the Artist's consent is obtained pursuant to Clause 43(b) and the Artist is clearly advised prior to and at the time of the stills session that such session is to take place. The Artist is to be given the right of approval in respect of selection of such publicity stills and shall not withhold approval beyond any conditions upon which consent may have been provided pursuant to Clause 43(b).
(e)The Artist may nominate an individual to be present during filming or Rehearsal of nude or sex simulated scenes.
(f)A Stand-In or Double cannot be used in a scene where the Stand-In or Double is required to appear nude, Semi-nude or in a sex simulated scene, unless the express written consent of the original Artist is obtained.
(g)

(i) The Producer shall ensure during the Rehearsal or filming of sex simulated scenes or scenes where the Artist appears nude that the set (or place of Rehearsal) will be closed to all but essential production personnel.
(ii) Where the Artist is directed to appear Semi-nude (but not in a sex simulated scene) the Artist may request that the set or place of Rehearsal be closed as provided in Clause 43(g)(i).
(h)The Producer shall ensure to the best of its ability that all outtakes of the film featuring the Artist in scenes referred to in Clause 43(a) are destroyed. This shall not apply to outtakes held for alternative versions of the film necessitated by overseas distribution requirements. In the event however that outtakes are retained as provided for in this provision such outtakes are to also be destroyed when no longer required.

If you have any questions or concerns about work (screen or stage) that requires nudity and/or simulated-sex scenes, please contact Equity immediately on 1300 65 65 13