Sydney company shows new way to make money off journalism, one tap at a time 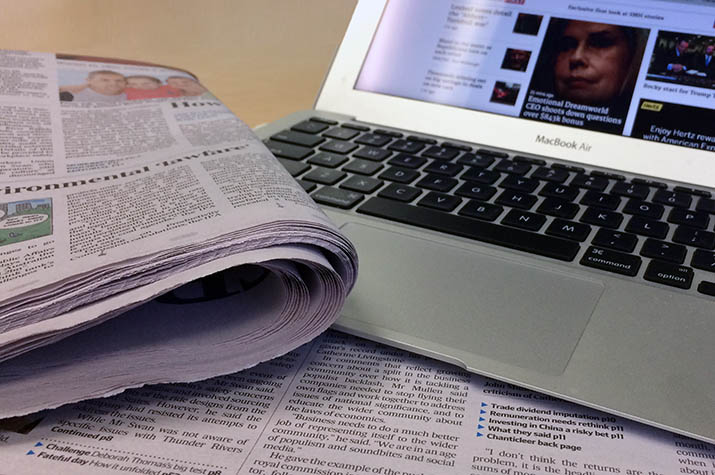 With media empires crumbling as they grapple with falling revenues and even the future of independent journalism under threat, everyone is searching for the Holy Grail of how to monetise journalists’ content online.

Traditionally, display and classified advertising provided rivers of gold to subsidise the journalism that compelled people to buy newspapers.

But classifieds are rapidly migrating to specialist business-to-consumer sites, while the modest revenues generated by display advertising and the emergence of ad blockers has made life even harder. And then there is the impact of the great aggregators of news content, Google and Facebook.

Publishers and broadcasters have adopted varying approaches from full pay walls like that of The Australian, to limited subscription as used at Fairfax Media, to totally free access underpinned by supporter donations (Guardian Australia).

But the jury is still out on which of these models will work, while small independent outlets and bloggers face even greater hurdles to how to generate earnings from their journalism.

However, James Jansson thinks he may have the answer.

Jansson is a co-founder of Tapview, a Sydney-based startup that has developed a micro-payments system for online media content.

In a nutshell, Tapview allows publishers, big or small, to charge a small fee for each article a reader views on their website, and to potentially convert that casual usage into a subscription.

It bears some similarities to Bitcoin and iTunes, but has been developed specifically for use by publishers.

MEAA is offering its members a special presentation of the Tapview technology in Sydney on November 24. Register here.

Jansson, who co-founded Tapview with Alexey Feigin and Jordan Rastrick, and launched the service in September hesitantly suggests it could be the solution for publishers and journalists seeking to monetise their content.

He says ad blockers are rapidly closing off options for publishers to generate sufficient revenues from online advertising, while for many consumers, the thought of paying a monthly subscription is a bridge too far.

“If we’re talking about $15 a month for a subscription, some people think will I use it that much?” Jansson says.

“That’s the difference between online and the print subscription model. Imagine if you walked into a newsagent in the ’90s and said ‘I want a newspaper’, and they said ‘that’ll be $30, but you will get the newspaper every day for the month’?

“People would be taken aback, but that’s what they’re being asked with an online subscription.”

No premium on loyalty

Jansson believes the Tapview model is in tune with modern media consuming habits, where people often no longer have the loyalty to a single masthead or broadcaster that justifies a regular subscription, but draw their news in the form of individual articles from dozens of sources.

TapView allows publishers to charge a small fee for each article that is read. But if the content is compelling enough, the readers will keep coming back providing the publisher with the opportunity to eventually turn those small individual payments into a subscription.

Readers must register with the site to begin paying for content, providing the publisher with a growing marketing database of readers’ contact details.

The fees can be tailored for different kinds of articles, so non-exclusive breaking news articles may be free, but lengthier investigative articles which the publisher has made an investment into would be pricier. How prices are set is entirely in the hands of the publishers.

“Micro-payments will be important, but I think the path to full subscription is equally important,” Jansson says.

Jansson adds that Tapview will be best suited to niche publications and to people who have unique content that is hard to copy.

Tapview is totally free for publishers to use, with the developer earning 30% of what the publisher charges readers.

The company has already formed a partnership with one major publisher, Fairfax Media, which is experimenting with the technology on two of its regional mastheads, the weekly Milton-Ulladulla Times and the bi-weekly Bay Post-Moruya Examiner.

Visitors to the Times’ site are presented with three options: free access to sport and community news articles only; a casual user’s plan of 20 cents an article; or full access to the website for a subscription of $1 a week.

Jansson said the Tapview model is particularly suited to specialist, hyper-localised rural press, but the start-up’s ambitions are to snare one of the big daily metro mastheads.

Although not a journalist himself, Jansson hopes that micro-payments systems like TapView could turn out to be the white bullet those who despair about the future of quality journalism have been looking for.

“I’m quite political and really interested in democracy, and the way things are going at the moment, we’re losing a lot of professional journalists especially at the big media players because they can’t monetise content as we move from print to online . . . I’m concerned at what will be the impact on democracy if we no longer have that kind of journalism.”

MEAA is offering its members a special presentation of the Tapview technology in Sydney on November 24. Register here.