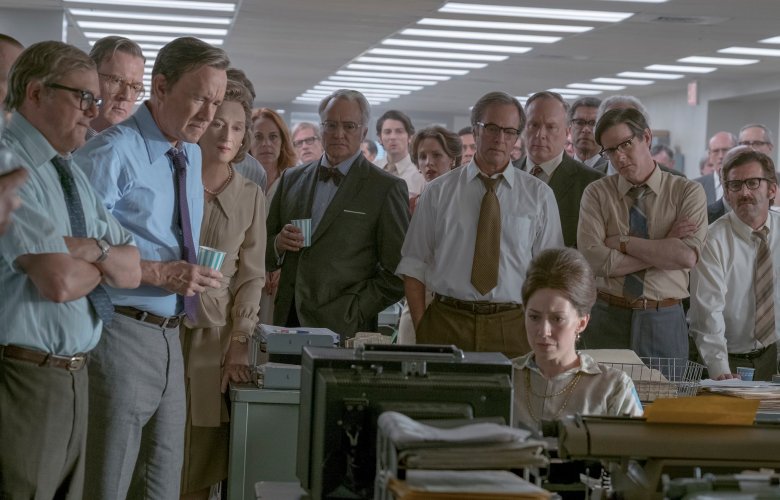 A scene from the Steven Spielberg film The Post, which depicts the Washington Post owner Katharine Graham and editor Ben Bradlee during the publication of the Pentagon Papers

Journalism has always been great fodder for film. Here are a couple of dozen of the best films made about journalism.

POPULATED by unforgettable, frequently eccentric characters, driven by the pursuit of truth and close to those in power and all the big events of the day, it’s no wonder that film makers often choose to use journalism as a story-telling device.

With the current acclaim for Steven Spielberg's The Post, about the Washington Post and the New York Times' battle to publish the Pentagon Papers,  we’ve put together this list of the must-see films about journalism.

How many have you seen?

No list of this kind could exclude the acclaimed portrayal of how The Washington Post discovered and pursued the Watergate break-in all the way to the Oval Office, eventually bringing down a President. Robert Redford plays Bob Woodward, Dustin Hoffman is Carl Bernstein, and Jason Robards is legendary Ben Bradlee. The final scene is an all-time classic of the genre.

The 2015 Walkley Award winning documentary chronicles the harrowing experiences of Australian journalist Michael Ware at the frontline of the war in Iraq and the birth of the insurgency that became ISIS.

The inside story of the Pulitzer Prize-winning expose by a small investigative team from The Boston Globe of the cover up of paedophile priests in the Catholic church.

Not strictly a film about journalism, but this thinly-veiled biography of legendary early-twentieth century newspaper tycoon William Randolph Hearst is considered one of the greatest films of all time. Orson Welles directed, wrote the screenplay and played the eponymous Charles Foster Kane. Within the film is the story of a newsreel journalist assigned to discover the meaning of Kane’s deathbed final utterance: “Rosebud”.

Dan Rather was one of the most revered names in American journalism, until his reputation was tarnished by a controversial 2004 report into President George W. Bush’s military service (or lack of it) during the Vietnam War. Based on 60 Minutes producer Mary Mapes’ book about the affair, and starring Robert Redford as Rather and Cate Blanchett as Mapes.

Al Pacino is a fearless 60 Minutes producer and Russell Crowe is a tobacco industry whistleblower in this true story about the struggle to air an uncensored segment about Big Tobacco.

A Miami businessman (Paul Newman) wakes up one morning to find himself implicated in a murder on the front page of his local newspaper, and forms a relationship with the author of the story, a gun reporter played by Sally Field, as he attempts to clear his name.

Humphrey Bogart is the crusading editor of a hardhitting New York daily newspaper who exposes a gangster’s crimes while trying to keep the paper from going out of business. The newspaper is loosely based on the defunct New York Sun.

A day in the life of yet another New York tabloid desperately trying to keep afloat and the perpetually harried city desk editor, played by Michael Keaton, determined to get to the truth, even if it means missing deadline. Robert Duvall is superb as the hardnosed editor-in-chief.

Directed, co-written by and starring George Clooney (the son of a TV journalist), Good Night and Good Luck depicts how the CBS See It Now program, led by Edward R. Murrow, defied corporate and political pressure to take on McCarthyism in the 1950s.

Gripping insider documentary about the challenge even the world’s greatest newspapers face from the internet. Irascible media columnist, the late David Carr, steals every scene in which he appears.

A remake of British TV mini-series of the same name, Russell Crowe is an old school investigative reporter who teams up with a newbie blogger (Rachel McAdams) to uncover a conspiracy that goes to the core of the US Congress. Helen Mirren pops up as the beleaguered newspaper’s editor, fresh off the plane from Fleet Street, it seems.

“We all get dressed for Bill,” says Vogue editor Anna Wintour in this documentary profiling the New York Times’ legendary fashion photographer who, like an anthropologist, captured the street cred and the catwalk style of the bustling city armed with just his camera, a bicycle, and oodles of disarming charm. Cunningham reported for the paper from 1978 until his death in 2016.

On April 20, 2011, shortly after the release of his documentary Restrepo - and only six weeks after attending the Oscar ceremony as a nominee - British photographer and filmmaker Tim Hetherington was killed by mortar fire in the city of Misrata, Libya, where he’d been covering the civil war. Hetherington not only covered frontline stories such as Liberia and Afghanistan, but also transcended the conventional boundaries of image-making to become one of the most important journalists of his generation. Restrepo filmmaker Sebastian Junger pays tribute to his co-director in this documentary.

Where would foreign correspondents be without the colleagues in their support crew? The local journalists, fixers, drivers, interpreters and others who face the same dangers to get the story and are left to face the fallout when the foreign journalist has moved on.

The Year of Living Dangerously (1982)

An Australian entry, looking at reporting the abortive attempt to overthrow Indonesia's President Sukarno in 1965 and the purge of the Indonesian Communist Party that followed. Featuring an outstanding performance by Linda Hunt as Billy Kwan in a film directed by Peter Weir with a screenplay by Weir and David Williamson, from Christopher Koch's novel.

The sight of Albert Brooks literally turning to water as he reads the nightly news bulletin will bring back stark memories to anyone who has turned to jelly when the TV camera’s red light came on. Along with Sidney Lumet and Paddy Chayefsky’s grim satire Network and its tale of newsreader Howard Beale (Peter Finch), it is a morality tale examining how mass media can destroy while pursuing ratings and dollars.

Australian director Phillip Noyce's film adaptation of Graham Greene’s novel The Quiet American, starring Michael Caine, Brendan Fraser, and Do Thi Hai Yen. Set during the French colonial occupation of Vietnam in 1952, Caine gives one of his most acclaimed dramatic performances as the washed-up foreign correspondent who is determined to observe and not get involved. Filmed on location in Ho Chi Minh City and Hoi An, Vietnam.

Gallows humour so good they made it thrice. A hit Broadway comedy about tabloid newspaper reporters on the police beat, written by former Chicago reporters Ben Hecht and Charles MacArthur which was first produced in 1928. Set is the dingy press room of Chicago’s Criminal Courts Building, overlooking the gallows behind the Cook County Jail. Reporters from most of the city's newspapers are passing the time with poker and pungent wisecracks about the news of the day. Soon they will witness the hanging of Earl Williams. Hildy Johnson, cocky star reporter for the Examiner appears only to say good-bye; he is quitting to get a respectable job and be married.

Directed by Joel Schumacher and starring Cate Blanchett. Journalist Guerin’s investigation into the drug trade in Dublin led to her murder in 1996, at the age of 37.

One day, someone — perhaps Jim Acosta at CNN — will interview Donald Trump and that interview may even surpass the drama of David Frost’s 1977 interviews with Richard “I am not a crook” Nixon. “When the President does it, that means that it is not illegal.”

Because we should never forget that six of our colleagues were murdered with impunity in 1975 and their killers have been getting away with murder.

Written and directed by Phillip Noyce and starring Bill Hunter, Bryan Brown and Wendy Hughes, Newsfront tells the story of the previously unsung newsreel cameramen, who raced to beat deadlines and dangers to capture on film, for a voracious audience of cinemagoers, the historic moments that were shaping a young nation. But looming in the background is a new technology destined to beam the world into living rooms, making the newsreel cameramen obsolete. Credited with ushering in the renaissance of the Australian film industry.