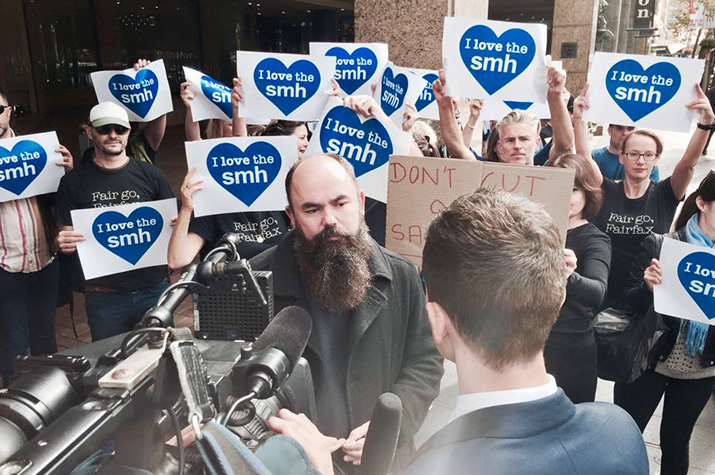 Around the world, journalists have expressed their support for Fairfax journalists in the wake of the company's decision on World Press Freedom Day to sack 25 per cent  (1-in-4) of its editorial staff from its metropolitan newsrooms in Sydney and Melbourne.

In a particularly poignant gesture, the courageous Journalists' Union of Turkey, which is confronting a government purge of the media that includes the arrest and detention of more than 100 journalists and the closure of dozens of media outlets throwing hundreds of journalists out of work, has offered its support and solidarity to Fairfax journalists.

The global journalists association, the International Federation of Journalists, which represents more than 600,000 journalists in 139 countries, strongly criticised Fairfax management's decision to cut 125 of its journalists to save money. "The IFJ stands in solidarity with the Fairfax staff," the Brussels-based organisation said in a statement. The IFJ general secretary, Anthony Bellanger, said: “On the day that we stand together and celebrate the brave work of journalists across the world, we are now standing in solidarity with our Fairfax colleagues and their continued fight for their jobs. We call on Fairfax management to take immediate steps to remedy the situation, without losing more jobs.”

Messages of support from around the world have been flooding in.

Sharan Burrow, general secretary of the International Trade Union Confederation in Brussels, said: "We were shocked to hear of the unilateral and deeply damaging plan of Fairfax management to cut 125 full-time equivalent jobs, at a time when the world is crying out for quality journalism to combat the lies, distortions and fake news which are driving xenophobic, nationalistic and extremely dangerous political narratives. On behalf of the International Trade Union Confederation, representing 181 million trade union members worldwide, I wish to join with the International Federation of Journalists in expressing our total solidarity with your action. We are witnessing a closing of democratic space around the world, and the exercise of free speech and good journalism are vital to democracy itself. The decision of Fairfax management is wrong and misguided, and the international trade union movement stands with you every step of the way in your campaign to reverse it."

Tim Dawson, president, and Seamus Dooley, acting general secretary, of the National Union of Journalists - UK and Ireland, said: "We learned with great concern of the decision of Fairfax Media to enforce sweeping redundancies at the Sydney Morning Herald, the Age and the Australian Financial Review. The axing of 125 jobs will have a devastating impact on the workers and their families. The proposed cuts will severely damage the titles at a time when editorial investment is crucial to retaining audiences. On behalf of NUJ members in the UK and Ireland we extend solidarity to your members and congratulate you on the swift response to the announcement of unilateral action on the part of the company. We wish you will well in your strike action and assure you of our strong support.

The Federation of Journalists Associations of Spain and the Spanish Federation of Journalists Unions said: "As Spaniards we always thought that Australian people were our antipodeans, but after receiving the news about the drastic plan to suppress 125 jobs in Fairfax Media, we feel ourselves very much identified with our colleagues of the Sydney Morning Herald, Age and Australian Financial Review. The brutality of the mentioned plan has to be called off because quality and free journalism continue to be an important tool of pluralism deserving a real and true democracy. On 3rd May, the World Press Freedom Day, we support the strike of Australian journalists struggling for their right to negotiate any possible alternatives to that savage jobs’ cut.