World Press Freedom Day 2021: hostility towards journalists is on the rise 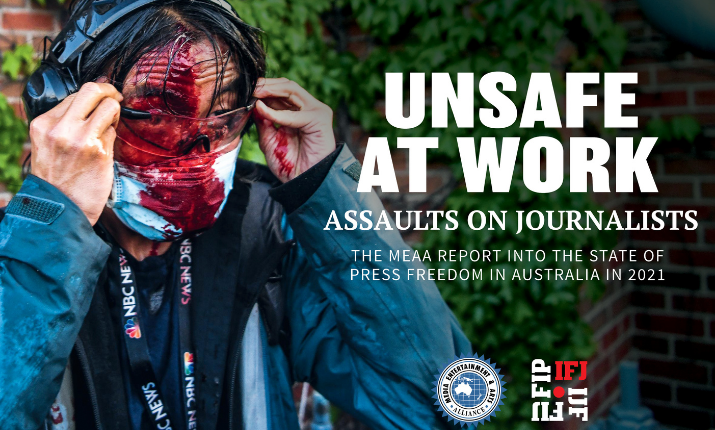 Journalists are fearful that increased harassment, abuse and violence directed towards them during the Covid-19 pandemic could become the new normal, says the union for Australian media workers.

MEAA says political polarisation caused by the pandemic was behind much of the rising animosity towards journalists, particularly through social media.

But the union also warns that law enforcement agencies have become more heavy-handed in their treatment of journalists.

According to MEAA’s 2021 press freedom survey – the fourth year it has been conducted – Australian journalists are fearful of an increasingly hostile working environment where physical assaults, online abuse and harassment by law enforcement agencies are becoming common.

Although most working journalists who completed the survey said they had not been physically attacked or harassed themselves, 88.8% said they were fearful that threats, harassment and intimidation was on the rise.

A larger number – 35% – have been subjected to threats to their safety online and 70% said they did not believe their employer provided sufficient training or support in situations where they faced threats or assaults.

“Journalists know that their work will always be under scrutiny and expect it to be criticised, but they are entitled to a safe workplace like all other workers,” said MEAA Chief Executive Paul Murphy.

“But in recent years, and encouraged by politicians, journalists are being exposed to much more than an acceptable critique of their work.

“They are threatened and sometimes assaulted at public events, while social media has now evolved into a vehicle for abuse, harassment and threats against journalists. Sometimes these attacks are one-offs but increasingly they are part of a torrent of abuse, which is a weapon to hurt and to harm.

“The polarisation of politics is a key feature in much of this abuse.

“Urgent action is needed to ensure journalists can carry on their duties to our communities free from abuse, harassment, arrests and violence.”

Overall, MEAA says that there has been little improvement in press freedom in Australia over the past 12 months, although the union welcomed the decision by the Australian Federal Police not to prosecute three journalists on national security grounds following raids in 2019.

MEAA is hopeful that reform is slowly approaching towards a national uniform defamation regime, and there are positive signs that the Queensland government will finally adopt journalist shield laws, bringing it into line with all other jurisdictions.

MEAA will release its 2021 report into the state of press freedom in Australia, Unsafe at Work – Assaults on Journalists, on UNESCO World Press Freedom Day, Monday, May 3. The annual report catalogues MEAA’s press freedom concerns in Australia, and our region. The report is available to read at pressfreedom.org.au.