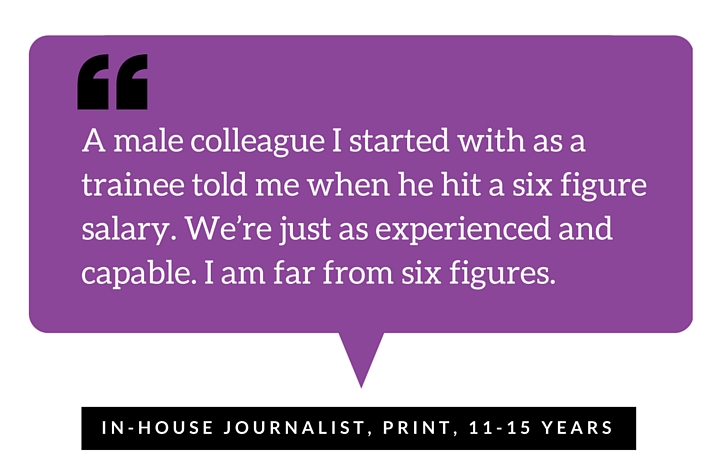 More than 1000 people were surveyed for Mates over Merit: The Women in Media Report.

Only 2% of women surveyed said there was equal pay for equal work in their organisations.

The vast majority – 81% of respondents – acknowledged the gender pay gap, which is 23.3% in the Information, Media and Telecommunications Industry sector, according to the Workplace Gender Equality Agency (WGEA).

“In this survey, we’re comparing apples with apples,” the national convenor of Women in Media, Tracey Spicer, said. “Women are sitting next to men, in the same job, at the same level, and being paid significantly less. Several senior female managers are paid less than their male subordinates.”

Interestingly, in the female-dominated workplaces of magazine and periodical publishing, there’s still a 12.9% gender pay gap. It's 23.2% in newspapers and 21.8% in broadcasting.

Few companies are taking steps to remedy this situation. Only 12.5% of Australian newspaper publishers have conducted a remuneration gap analysis in the past 12 months. None have specific pay equity objectives in their formal policies.

While the same number (12.5%) of broadcasters have analysed the gap, 42% have pay equity objectives in their formal strategies.

Around one-in-seven magazine and periodical companies (14.3%) have conducted a remuneration gap analysis. All of them (100%) have equity objectives in their policies and strategies.

A 2013 study by Dr Folker Hanusch, associate professor at the Queensland University of Technology, found only a third of female journalists (35.6%) earn more than $72,000 a year, compared with around half (53.1%) of male journalists.

Katelin McInerney, director of the Media Section at the Media Entertainment and Arts Alliance, said media companies must "step up their game" to maintain the diverse range of skills and experience needed in a rapidly changing landscape.

“Women make up half the workforce, are leading the way in investigative reporting, and are the biggest consumers of online content. It makes sound business sense for media companies to identify where the disparities are occurring.”

MEAA is calling for audits and action on the gender pay gap; improved procedures to deal with social media harassment; and anti-discrimination policies to be put into practice.

The survey was developed by the national steering committee of Women in Media, backed by the Media Entertainment and Arts Alliance, researcher Beverley Uther, and iSentia. It collected data from 1054 Australian journalists between September and December 2015, with 91.8% of the respondents being women. Read the full report here.

What they said on gender pay inequality

“I recently discovered I am being paid 35% less than a man in the same position.”
Publisher, online, 11-15 years experience

“A male colleague I started with as a trainee told me when he hit a six figure salary. We're just as experienced and capable. I am far from six figures.”
In-house journalist, print, 11-15 years

“I recently found out that a staff member who was directly below me in the management line earned exactly 19% more than me. Since I recently applied for maternity leave, this staff member has also been promoted to a senior position that had been promised to me prior to my pregnancy.”
Editor/Producer, print, 5-10 years experience

“As a senior manager I know my male counterparts get paid more for the same work.”
Radio manager, years of experience not disclosed