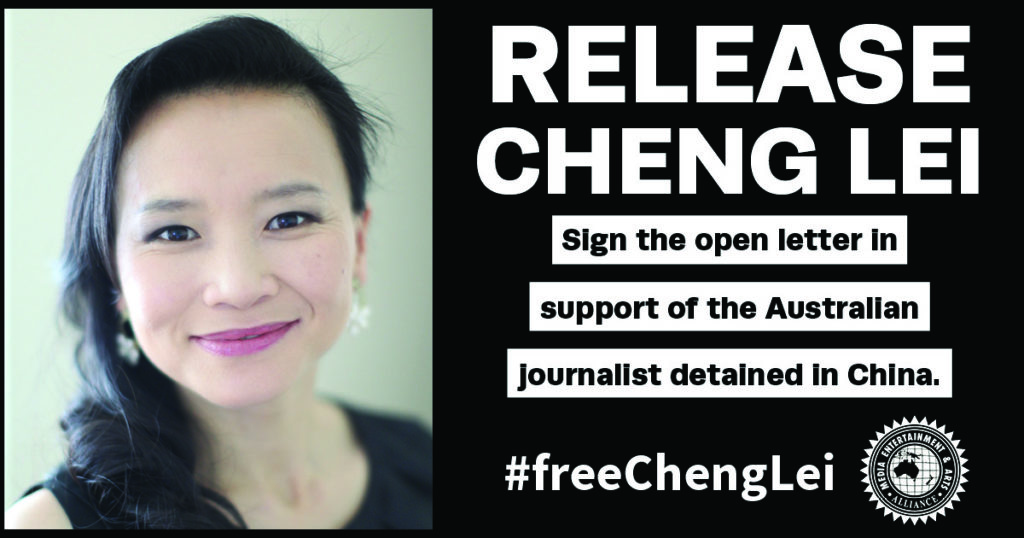 US and Australian press leaders on Wednesday strongly condemned the ongoing detention and secretive prosecution of journalist Cheng Lei, an Australian citizen and mother of two children, who was previously a high-profile business news anchor on China’s state-owned TV channel CGTN. Lei, who earlier in her career worked for CNBC, is scheduled to be tried in a closed court hearing in Beijing on Thursday, March 31 after being held in prison for 19 months.

She has been denied contact with her 10-year-old and 12-year-old children. She is being held on dubious charges that have yet to be substantiated with any evidence. At this point, it is unclear if Australian consular staff will be allowed to attend the court hearing.

The National Press Club (Washington DC) joined with the Media, Entertainment & Arts Alliance (MEAA) of Australia, the National Press Club (Australia) and the International Federation of Journalists (IFJ) in calling on Chinese authorities to conduct a fair, open and public trial for Cheng Lei, who has been accredited with the International Federation of Journalists since 2009.

“MEAA members stand with Cheng Lei. We have urged the Chinese government to show compassion by allowing her to return to Australia and we condemn her arbitrary detention and the secretive trial process she has endured,” Federal President of MEAA’s media section, Karen Percy said.

National Press Club (DC) President Jen Judson and National Press Club Journalism Institute President Gil Klein expressed their deep concern over the lack of due process in Cheng’s case, which has been conducted largely in secret: “Why have the accusations against Ms. Cheng never been explained and why has she been denied proper access to legal representation? We call for her immediate release.”

Cheng Lei is one of many journalists who are facing detention and long prison sentences in China over frequently spurious charges as the country is witnessing an increased crackdown on press freedom. Numerous western journalists have been expelled from China.

“We regard the treatment of Cheng Lei as a grave threat to an Australian journalist. We call for her release from detention so she can return to Australia and her family,” said National Press Club president Laura Tingle.

IFJ Asia Pacific Regional Director, Jane Worthington, said: “We are extremely concerned at the Chinese government’s unstipulated allegations against Cheng Lei and the complete lack of transparency surrounding her detention over the past 19 months. The IFJ expresses our grave concern at Cheng Lei’s treatment and calls for all charges to be dropped immediately so she may return home to her family in Australia.”

More on the organisations:

• The International Federation of Journalists is the global voice of journalists. Founded in 1926, it is the world’s largest organisation of journalists, representing 600,000 media professionals in 187 unions and associations in more than 140 countries.

• The Media, Entertainment & Arts Alliance (MEAA), founded in 1910, is the union and professional association for Australia’s journalists. www.meaa.org

• Founded in 1963, the National Press Club (Australia) is the nation’s premier forum for major addresses by political, business and community leaders at its headquarters in Canberra. It has argued consistently for the freedom of the press.

• Founded in 1908, the National Press Club (DC) is the world’s leading professional organizations for journalists. The Club has 3,000 members representing nearly every major news organization and is a leading voice for press freedom in the United States and around the world.

• The National Press Club Journalism Institute, the Club’s non-profit affiliate, promotes an engaged global citizenry through an independent and free press and equips journalists with skills and standards to inform the public in ways that inspire civic engagement.

Show you stand with Australian journalist and MEAA Media member Cheng Lei by signing the open letter of support, HERE.

Read the statement from the press clubs, the IFJ and MEAA HERE.