The public's right to know 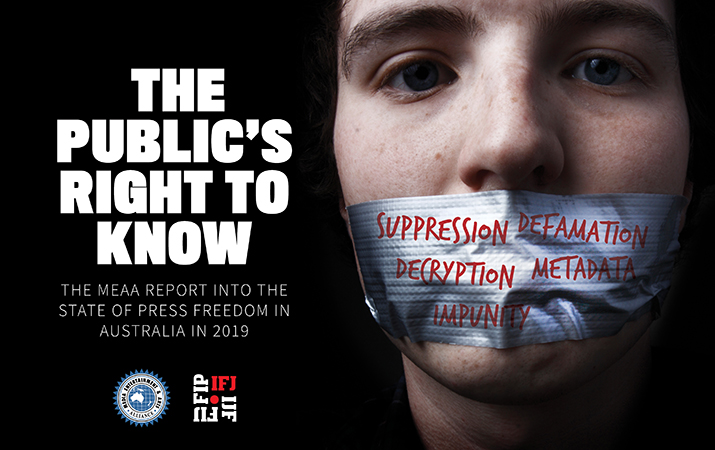 The foreword to the MEAA report into the state of press freedom in Australia in 2019 by Paul Murphy, MEAA chief executive. Read the full report online or download a printable version.

The public’s right to know is a key tenet of a healthy, functioning democracy — and it is one of the responsibilities of open and transparent government. It’s also a cornerstone principle of journalism.

Increasingly, however, governments are denying that essential democratic ingredient. More and more, they are looking to operate in secret, shroud their activities and suppress all the information about them, discourage freedom of information searches, pursue and punish whistleblowers and place barriers in the way of journalists seeking to tell the truth of what governments are doing in our name.

In Australia, waves of new laws are passed in the name of “national security” but are really designed to intimidate the media, hunt down whistleblowers, and lock-up information. We saw it when attempts to control asylum seeker boats sailing to Australia, a customs and immigration issue, became militarised as Operation Sovereign Borders.

Suddenly the Navy was conscripted into “protecting” our borders from leaking sailing vessels and handfuls of pitiful refugees fleeing persecution, terror and war. Immigration officers became black-uniformed troopers in the newly named “Border Force”. And even though the high-ranking Defence Force officer held regular press conferences, little was ever said because the militarisation of immigration activities meant the military could simply cloak everything as “on-water matters” — refusing to say anything in order to defend national security. And so the public was kept in the dark.

What began with a muzzle regarding “on-water matters” soon extended to asylum seeker detention centres on Manus Island in Papua New Guinea and on Nauru. The governments of those countries wouldn’t comment on what took place in the Australian taxpayer-funded centres and news laws were implemented to punish any workers or aid agencies or their contracted organisations from talking openly about what they saw there. Journalists were refused access to the centres and their detained inmates.

Some refugees have managed to bypass the bans. MEAA is proud to have worked with Behrouz Boochani, a Kurdish journalist and refugee from Iran, who has determinedly produced outstanding and award-winning journalism from Manus. MEAA remains concerned that Behrouz’s courageous reporting, including his recent prize-winning book, places him in danger which is why we are campaigning to #FreeBehrouz so that he can resettle in safety in Australia. MEAA does so with the aim to bring more attention to all who are subject to Australia’s immigration detention regime and ensuring the public’s right to know.

Australia’s national security assault on press freedom has also worked to criminalise legitimate journalism in the public interest. The various tranches of national security legislation unleashed by the government in recent years, when applied to journalists and their journalism, clearly have little to do with protecting the nation and more with making sure the public is kept in the dark. Prison terms for reporting on the activities of government agencies and for handling certain information are now enshrined in law.

And journalists’ sources continue to be targeted. While new laws seek to provide some whistleblowers with protection, and only when placed under certain conditions and in defined circumstances, government is also willing to hound whistleblowers in court. The court actions mounted against Witness K and lawyer Bernard Collaery for revealing events that took place 14 years earlier, the threat of 161 years in prison being faced by Richard Boyle and the charges against former Defence Force lawyer David McBride all demonstrate that even when whistleblowers have told their stories to journalists and the public finally learns the truth, the truth tellers will still be pursued and punished.

Meanwhile, the government continues to equip itself with new weapons in the attack on whistleblowers. Having used the metadata laws to capture everyone’s telecommunications data, Journalist Information Warrants allow at least 21 government agencies to secretly access journalists’ and media organisations’ data for the stated purpose of identifying a journalist’s confidential source — thus placing the journalist in breach of their ethical obligation to protect the source’s identity.

The government has now embarked on new laws to decrypt encrypted communications. Again, the claim is made that this is in the name of national security but the government’s powers could put journalists at risk should sensitive, and potentially damaging, information land in their hands. The backdoor mechanism to break encrypted communications weakens the overarching system of encryption, creating a loophole that could easily be targeted by hackers and online criminals, and risk the safety of journalists.

The hasty response to the Christchurch shooting also demonstrates the government’s ill-thought-through use of badly drafted legislation. The Criminal Code Amendment (Sharing of Abhorrent Violent Material) Bill 2019 has led to concerns about the lack of defences for individuals who may be whistleblowers or media companies who are publishing atrocities that they are trying to draw to the world’s attention. The law means whistleblowers may no longer be able to deploy social media to shine a light on atrocities or raise awareness of human rights abuses.

Journalism is being criminalised and whistleblowers who seek to expose wrongdoing are being punished — all for having the temerity to aid in the public’s right to know.

Overseas issues continue to challenge press freedom everywhere. It is not such a great leap for powerful people to dismiss news stories they don’t like as being “fake news” to declaring journalists and media outlets “enemies of the people”. From there it is a simple step for governments to arrest journalists, shut down media outlets or silence journalists forever.

The past year has also seen the murder of journalist Jamal Khashoggi in the Saudi Arabian embassy in Istanbul. The brutality of the killing and the failure of governments to react (claiming that their trade deals with the Riyadh regime are worth more than a journalist’s life) prove that government continue to provide impunity for the killing of journalists.

The relentless harassment of Filipino editor Maria Ressa, a Time magazine person of the year; Myanmar’s imprisonment of two Reuters correspondents for investigating a massacre of Rohingya men; the jailing of 68 journalists in Turkey and 47 in China — all these are indicators that show that governments will do almost anything to muzzle the media.

Closer to home, the trolling, abuse and harassment of journalists online continues to be a concern. Journalists are increasingly required to maintain and online social media presence to, in part, promote their own work and that of their colleagues and employers. Too often, the response from others is hate speech and threats of violence. More needs to be done to ensure the laws that should protect people from being menaced or harassed by someone using the internet or telephone are fully enforced.

This issue, together with the case of a former Age journalist being awarded $180,000 in damages for post-traumatic stress, anxiety and depression, also signal that media employers must do much more to look after the welfare, health and safety of their journalist employees.

This year marks a decade since the 2009 Ampatuan Massacre in the Philippines — the single greatest atrocity against journalists — where 58 people were killed, among them 32 media workers. The massacre happened because the Philippines was already mired in impunity over journalists killings — when one murder goes unpunished, the killers must have thought, would anyone really protest the murder of 32? They are almost right, because a decade on we are still waiting for justice, and dozens of the suspects including senior police and the military are still on the run.

Australia’s own sorry toll of nine journalists killed with impunity continues to scar our history. The failure of successive governments and police to fully investigate these murders and to bring those responsible to justice is damning.

There has been some good news on several long-standing press freedom issues.

In our courts, the principle of open justice is trampled on as jurisdictions across the country issue a barrage of suppression orders. However, the George Pell trials highlighted the suppression order issue — both for why orders are sometimes needed and also why many judges are misusing the system either to punish the media or to placate the powerful — many orders are simply nonsensical and poorly defined. MEAA has long called for suppression orders to be reformed and the Vincent Review of Victoria’s problems and recommendations for solutions points the way.

MEAA has long campaigned for reform of the uniform defamation law regime. It is finally being reviewed after more than 13 years of bloated damages. Powerful people launch defamation actions and win enormous payouts without having to demonstrate they actually have a reputation, let alone one that has been damaged. The review has raised the question of whether corporations should be allowed to sue — MEAA argues that handing over this kind of power to wealthy businesses will only further erode the public’s right to know.

There are welcome discussions taking place about improving diversity in our newsrooms, in the journalism they produce and the opinions they publish and broadcast. Diversity must reflect the audience the media serves. Gender diversity as well as cultural and religious diversity can only make Australian journalism better.

Locking up information, punishing those who tell the truth and placing as many barriers in the way of information getting out — all these are increasingly tainting Australian democracy. It’s time to push back this tide of secrecy, intimidation and harassment — not least because it is getting dangerously out of control.

The public’s right to know must be upheld and championed by all those that value it.

Read the full report online or download a printable version.