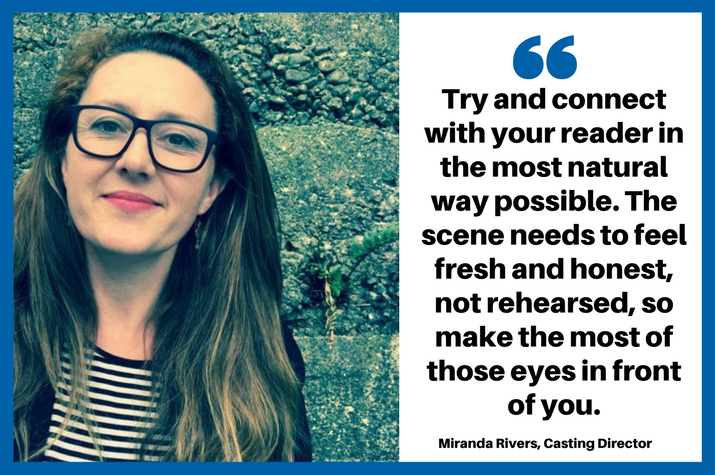 Casting director Miranda Rivers offers her advice for nailing your next audition.

Miranda Rivers is co-director of The Casting Company in New Zealand. Her work ranges from big-budget movies, such as Avatar, The Hobbit and Lord of the Rings trilogies, and Crouching Tiger, Hidden Dragon 2, to films like the western Slow West and comedy-horror Krampus. Working on Tusi Tamasese’s One Thousand Ropes was a career highlight. She is currently working on Daffodils, a NZ feature film by David Stubbs.

1.Congrats on getting an audition! You have already made it past the first hurdle, so try to avoid your inner monologue of: I’m not right for this role as they are younger/older/taller/shorter etc on the brief. The casting process is exploring who is right for the role and that person may just be you. Believe in yourself, so we can, too.

2.Be prepared with your lines. Whether you’ve had a week or just overnight, do your best to prepare yourself with the material. Casting directors in NZ and Australia are working with directors who expect you to know your lines as a sign of being interested in the project, even if it’s an overseas production. Occasionally, we might do a cold read, but it’s not standard practice.

3.Come in with your original take on the character. Feel free to walk in the door with your ideas and give it a go. That choice you make may just be the difference between a good and a great read. Be prepared to trust the casting director if they believe it’s not working. They want you to do your best and wouldn’t want to present a read that’s way off target.

4.Be flexible. This means being prepared to work with a new angle on the scene that the casting director may throw at you. Remember that they have had in-depth discussions with the director on the tone and style of the piece. They may also be testing how well you take direction.

5.Try and connect with your reader in the most natural way possible. The scene needs to feel fresh and honest, not rehearsed, so make the most of those eyes in front of you. Don’t rush – take a moment to connect before you start, then just be in the moment. If you force it, we will see the ‘acting’. Search for truth and don’t be afraid of stillness. Think about how your character sits in their world – what has just happened before the scene and what happens straight after. If you don’t have access to the full script, then just make those decisions yourself or ask in the audition room.

6.Polish your accents. Invest the time in having great US and UK accents. This is a major part of being an actor in NZ, as we have many off-shore productions that come here to shoot. There is nothing more disappointing than having a great read by an actor but they don’t get the job because the accent is not believable. There’s no excuse – there are so many resources online. If it doesn’t come naturally, hire a dialogue coach to help.

7.Be clear on the genre. It really makes a difference to the style of performance if you are auditioning for a comedy versus a period drama. Fantasy and action films are also very different, so be clear before you arrive. I don’t want to crack up laughing when you’re doing a death scene unless it’s written that way.

8.Resist the urge to wear over-the-top costumes or badly fitting wigs. Yes, I’ve seen it all – I’ve done a lot of fantasy films! Even though you may think the green tights and pan pipes are a fantastic add to the scene, really, they’re just distracting us from your performance. A hint of costume is fine – for example, a scarf over the shoulders to depict the Roman era – but don’t wear a branded sports T-shirt when you’re auditioning for a World War II film. Use your common sense.

9.If you are auditioning for a movement-based role, wear clothes you can move in and do your warm-up in the waiting room. Come into the room prepared to go. I’m not really keen on seeing you stretch and do 20 push-ups! The audition is just to show you have the potential for the role and we want to safely see a snippet of what you have to offer. It can be explored further with a stunt coordinator at the recall stage.

10.Enjoy your audition. We are all in this together, trying to make the best work possible. It’s a creative process, so there is no one right way to explore the scene. Enjoy the process of discovering your character and having this opportunity to share your craft with us. Even if you don’t get this role, we will remember your work for the future.