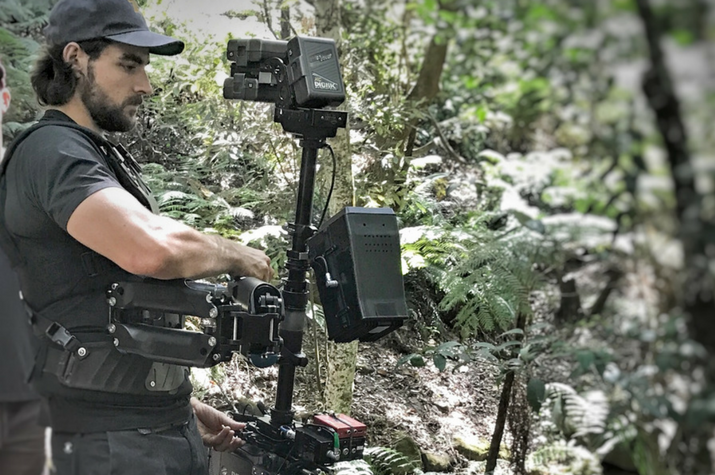 Jake Iesu is a Steadicam operator and proud MEAA member. Jake recently got involved in the Get Real on Rates campaign because he wanted to see conditions improve for a largely freelancer industry as well as allowing the industry to remain sustainable and competitive internationally for years to come. And his advice for people just starting out in the industry? “Two ears one mouth, listen twice as much as you speak.”

What does your role entail?
I've recently started operating Steadicam full time, which for the uninitiated, involves strapping around 30kgs of mechanical apparatus to my body looking like a cross between a techno-specialist, artist, dancer, master blaster or the Incredible Hulk. The purpose? To defy the laws of gravity, scowl at Newton, to fly through a shot in one take, save the production and wed or bed the star.. it helps to have a positive attitude. Prior to Steadicam, I enjoyed eight years of camera assisting.

Take me through a full day for you on set.
A general day on set usually entails arriving on location at the crack of dawn with a van full of equipment. After unloading and setting up the camera on the steadicam with the help of camera assistants and grips, I assess the requirements of the project with the cinematographer and/or director. Blocking and shot finding will usually ensue, followed by some rehearsals (affectionately coined “take 1”). The grips are very important in the process; without their guided eye watching my back, my day might very well end here. The support of the other departments ensures we get the shots the project demands, while the crew and equipment remain safe. After a successful take, we can continue the same process with either tighter coverage or to cover a different piece of action. After a shirt change, of course.

Jumping between Steadicam and a production (tripod or dolly mounted) camera, is also fairly common, particularly on limited budget shows which usually keeps myself and the camera assistants busy until the meal break. The afternoon will often follow the same process, albeit with a tighter fitting vest.

How did you get your start in the industry?
Straight out of a film and TV diploma through TAFE/ University of New England, I was fortunate enough to land a job at a television station shooting local TV commercials selling cans of tuna and agricultural machinery, It was exciting stuff! Fortunately, it gave me the taste for the industry and helped get a foot in the door with some prominent commercial cameramen in Sydney and eventually, some full time employment with a major camera equipment rental house. Once I was able to build some strong relationships with camera assistants and cinematographers (many of which I still work with today) I made the leap to freelance camera assisting, starting off with an ad for..... tuna.

What's the best thing about your job?
I have always enjoyed the efforts of blending science with artistry, seeing the results of the combined efforts of hundreds of people to achieve one particularly complex shot is a joy to behold. Everyone has a role on a film set, no matter how insignificant it might seem at the time. If the director's PA's job is to turn the director’s personal headphone volume up at the precise moment the lead actor's dialogue is said in order for the ’subtle nuances’ of the performance to be heard over the sound of LMFAO’s 'Party Rock,’ then so be it. They are helping to achieve the end product no matter how far fetched it may seem. Everyone has to peel someone else’s eggs sometimes.
Looking back on an often strange business at the stories and “camaraderie” that is made during the making of the art we call filmmaking is hard to beat.

What are some of your career highlights?
Being taken out for dinner with 30 friends in Hong Kong for my birthday by a lead actress was quite a surreal experience. However 'frocking up’ and taking my (now) wife to the premiere of the Great Gatsby (my first feature film) and seeing the fruits of our labours surrounded by the cast and crew who made the picture, takes the cake. Watching George Miller direct a semi smashing into another semi on the set of Mad Max: Fury Road, was pretty damn cool as well.

What would be your advice for people wanting to get into the industry?
Sometimes it can be a difficult road, early mornings, late nights, long days. Get a good taste for the business in an entry level role before you devote your life to it. Speak to your family, especially your significant other. Are you sure you're both on board with the demands of the job? If you are, just go at it with your teeth bared! Be positive. Don’t complain. Work hard, but most importantly, work smart. In the camera department especially, everything is about having systems: systems for getting your marks; systems for setting up the equipment; and systems for getting paid on time. The more time and focus you put into your systems, the smoother and better everything will work for you.

Finally a very good focus puller friend gave me this advice when I got married which I feel is equally relevant to our business. "Two ears one mouth, listen twice as much as you speak”. Thanks David.

You recently got involved in our Get Real on Rates campaign, why was that important to you?
The Get Real on Rates campaign is vitally important to our industry. We have a rather unique industry whereby it is almost entirely comprised of self employed freelancers. This gives us the freedom to set our own working conditions and our own rates. However, it does have a downside. We can also be isolated and individually negotiated down on our rates and conditions which can often cause a snowball effect for the industry as a whole. One effective way to combat this budgeting mechanic is to have the support and bargaining power of a union behind you, a place where you can know that a collective of like minded people will have your back to establish, and uphold, your rate of pay and conditions - precisely what the Get Real on Rates campaign has set out to achieve.

While it is important for Australia to remain competitive internationally, our conditions and pay are only one small slice of the viability pie for productions coming to our shores. Producers aren’t left out either, having a standard agreement in place introduces simplicity and ensures their is no surprises when it comes time to budget the cost of using Australian crews.

We need to keep working together to achieve this. We need to continue the conversation and not subscribe to the archaic mantra of not talking about money with our colleagues. There is enough work here in Australia for us all to keep gainfully employed. Their is no need for us to compete over conditions and wages. Let's stick together and insist on being paid fairly for the roles in which we have all worked so hard to obtain.