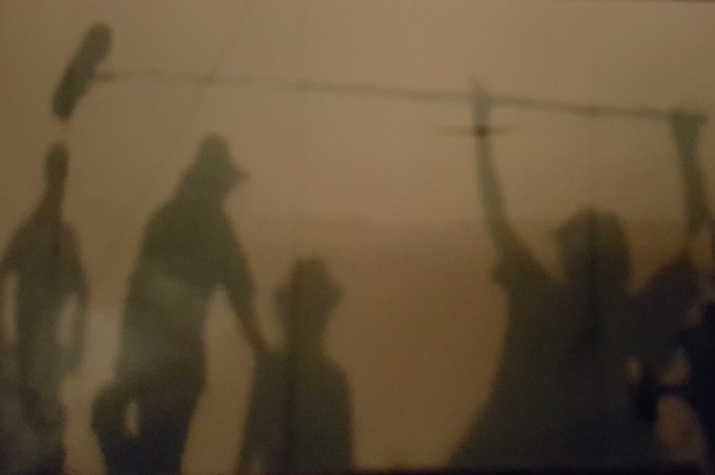 Proud MEAA member Cathy Gross is a boom operator at Home and Away. She chats to MEAA about what her profession involves, explains the “levels of sock” and one of the best working days of her career.

Can you describe your role in the industry?

I’m a boom operator. I operate a long stick with a microphone attached to it. There’s not a lot of women in it now but certainly a lot more than when I started.

How did you get your start?
I was inspired to become a boom swinger when I was a sound recordist on the making of the Right Hand Man, a film about the leviathan (largest stage coach ever built). I was asked to hold the boom for one of the shots. A few years later, I was working on a new film, the boom operator I had worked with on Right Hand Man was unavailable, so they asked me. And that’s how I got into being a boom swinger.
When I started out, I wanted to be a recording engineer and make records. I had training at Albert’s, a famous recording studio in Kings Street. I wrote to all the radio/TV studios and told them that I knew nothing but wanted to learn. Channel 9 wrote back to me saying they wanted me to apply for a position, and I got the job. I was the first woman to work on the studio floor of a major TV station. We got to learn everything in those days, outside broadcast, sound recording, variety, music and orchestras. You had to set up everything and you had to put programs to air. I progressed through Channel 9 until I became an audio director and worked on almost all of their productions. Went freelance in 1984, and during that time I worked on everything from TV series, mini-series and feature films. In 2015 I signed a contract with Home and Away.

Take me through a typical day for you on set?
On Home and Away I turn up at 7am for a 7:30 record. If I’m on a set where I can use the fisher booms (mechanical booms) then I will set those up.
Once we start filming I don’t stop. It’s quite relentless on Home and Away, we shoot one scene after another. What I like about Home and Away is that in the studio it is all boom, no radio mics, so I get to practice my craft the whole time.
The only difference between working a boom outside is that the boom needs to be dressed up for wind protection. Depending on the conditions, I will use different covers and wind jammers, “various levels of sock” as they are called, to decrease the levels of wind depending how strong it is. This of course adds weight to the boom, so the windier it is the heavier it is, which makes it harder to swing around. My body also has to act against the wind. A lot of those issues disappear when you head into the studio. The biggest problem inside is the lighting. You have to make sure you don’t create shadows.

How has the use of radio mics in filming affected your profession?
The new form of shooting, where they shoot the wide shots and the tight shot together, has made the need for radio mics more and more prevalent. The boom swinger needs to be the one to put them on and make them work. But the actual swinging of the pole has diminished. There are also times where radio mics can’t be used because of things like wardrobe, if the actors are swimming, holding props, kissing or hugging then the radio mic wont work so the boom has to step in there.

How does being a boom operator affect your body?
It’s tremendously hard on the body. We work with our whole body. You hold the boom freely above your body and you are the counterweight. It’s incredibly difficult if you are working somewhere where there is uneven ground, on the beach or on the water because you don’t have anything to hang onto so you just hope you don’t fall over.

What are some of your career highlights?
The biggest highlight was a single day when I was a sound recordist for Greg Grainger, working on a program called Travel Fantasy. We caught an overnight Orient Express from Venice to Paris, a Concord to NYC, helicopter through NYC and went up to the Empire State Building. We took some photos at the top, then we went straight back onto the helicopter, back on the Concord to Paris, then drove to Joiny to a 17th century chateau. We woke up the next morning and had a champagne breakfast on a hot air balloon. We were there filming for Concord, so after our work was done, we just got to enjoy ourselves.

Why do you think it’s important to be a MEAA member?
I’m a member of MEAA because it’s the only insurance I have for my conditions. I can’t fight for myself, the collective is always more powerful than the individual. Unionism for me is a way to protect your rights and make sure your conditions are better by strength in numbers.