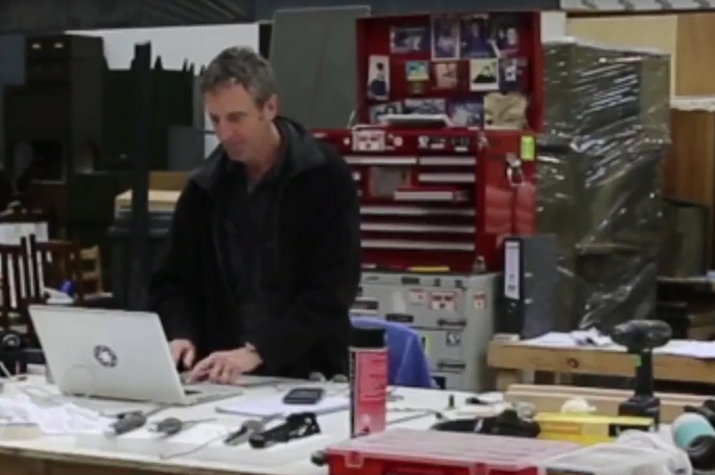 Adam Grace, makes all the props on a production that can't be hired or bought. He has worked on some of the world's biggest films from The Matrix to Star Wars and Alien. He chats to us about the increasing role of technology in props, and how his love for making models and sci-fi lead him to work on some of the biggest films in the industry.

Can you tell me what your role is?

Set up a workshop. We will have to set up tools and equipment as well as getting benches sorted. We will have a look at some basic materials we might need to order as well as look at what specific materials we might need for a particular job, and order those in. Then we look at what crew members might need to be employed. Every job there will be a coordinator, a runner and maybe a leading hand or two. But if we have enough information to hit the ground running then we might start booking appropriate people such as moulding and casting crew or might need a sculptor, or a metal worker or an engineer. It all depends on what the initial designs might entail.

Take me through a typical day on set for you.

As 2IC I will order specific materials, I might get hold of some drawings from the art department that I will need to break down into produce “CAD files” to get 2D and 3D machined. I might discuss a particular project with my supervisor and we might allocate people for a job. We might collect the drawings and sit down with the leading hand and the crew we think might be suitable for that job to run through it.

On tighter deadlines, we might get jobs in 3D. There might be designs in 3D so rather than drawings being produced, they might need a model on set in four or five days, which isn't enough time for us to order anything, or carve or even order any material to get into our workshop, but we can contact a company that has a 3D machining robot and we send the job straight to them.

It sounds more technical than I thought.
Well on a film like Alien, being sci-fi there are a lot of technical elements, a lot of sculptural elements plus a lot of control consoles and buttons and switches and panels like that which meant having all of those elements cut out of a laser cutter and then assembled. Whereas the last film i worked on, Hacksaw Ridge, a WW2 film, so everything was a lot more hand made and a lot more timber work if you like. It depends on the film.

What’s the most challenging prop that you’ve had to build?
Usually it's the large ones. On Wolverine 2 we had to build a four meter tall samurai. We roughly had three months and they wanted it to be chrome-plated looking. There were a lot of elements on it where we didn't know what we were going to do. 3D printing was becoming affordable and we also found a process where we could wrap pre printed images around compound shapes, So we were able to take advantage of that.

On Alien, the quantity was the biggest challenge for us we had a scene where we had to produce close to 40 items which are roughly the size of a coffin. From the time we got the final approval to when they needed to be on set was very short deadline. We had a number of different technologies being used and we had a couple of different companies 3D machining parts just so we could get molds made and copies reproduced in time. So challenging props, often it's the time limit they give you.

How do you keep up with technology and find out about new products?
If it's one of our chemical suppliers, that sell us rubbers and urethane resins, they might let us know if they’ve developed a new product or if there is a new development out of the States. They act as a kind of the sales rep on behalf of the chemical companies so they’re keen to let us know about products that might be useful. As far as the technologies, our vendors will usually let us know if they’ve bought a new laser cutting machine or if they’ve bought some 3D printers so we can make use of their facilities.

What are some of your career highlights?
I got to work on a couple of Star Wars films that were filmed here in Australia. We got to work on full size spaceships. That was pretty exciting. My background is model-making and i'm a science fiction fan and making miniatures is wonderful. But that was all handled over in the States. So the next best thing was working on the full size ones, construction and build on the exteriors and fitting out the interiors of the space ships. It was a joint effort between departments. It was great.

I also got to work on The Matrix films where we had to make a four-meter-tall robot suit. We had a good amount of time on that one but it was pretty impressive.

Our voice matters. As like minded members collectively we have a voice. We are offered the chance to have a say deciding on working conditions such as penalty rates or any changes that the production put forward, we have the opportunity to respond and have our collective voice heard.