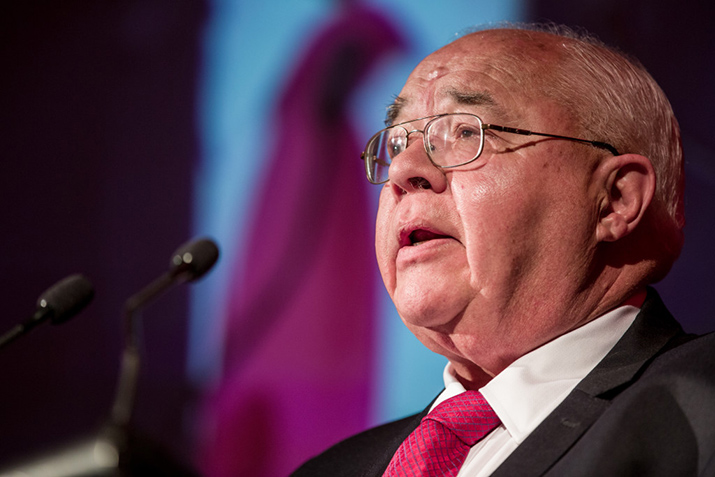 “We tend to sit back and blame the government for infringements on press freedom . . . we also should blame ourselves, I think,” says Laurie Oakes. Photo: Mathew Lynn

Press Gallery veteran says journalists have been too complacent about creeping restrictions on press freedom. By Mark Phillips

Journalists have been culpable in the steady erosion of press freedom in Australia by failing to take a strong stand against national security laws which impact on their ability to do their jobs, press gallery doyen Laurie Oakes has warned.

Delivering the keynote address to the inaugural Melbourne Press Freedom dinner on 25 September, Oakes, the political editor for the Nine Network, accused journalists and media organisations of apathy and acting too slowly in recognising the threat encroaching security laws meant for their profession.

And he challenged journalists to garner public support for press freedom by rebuilding trust in journalism, which has been damaged by scandals like the Fleet Street phone hacking revelations.

Addressing about 250 journalists and media executives at an event organised by the MEAA and the Melbourne Press Club, Oakes implied that the Federal Government had a double standard by campaigning actively for the release and pardon of Peter Greste and his Al Jazeera colleagues in Egypt, while criminalising some journalistic activities at home.

Oakes said journalists needed to become more active in questioning laws which restrict their freedom or expose their sources.

“These things can’t just be left to governments,” he argued.

“If we’re to achieve a proper balance, it’s also incumbent on journalists and publishers and broadcasters to fight the press freedom side of the argument. It’s not going to be given due weight by governments of any stripe otherwise.”

Oakes cited three recent law changes: Section 35P of the ASIO Act, which includes five-jail sentences for disclosing undercover operations involving security agencies; the Foreign Fighters Bill, which makes it an offence to advocate terrorism; and the metadata laws, which could unwittingly expose journalists’ sources, such as government whistleblowers.

In each case, Oakes said opposition from journalists and media organisations arrived too late.

“We tend to sit back and blame the government for infringements on press freedom . . . we also should blame ourselves, I think,” Oakes said.

“We got complacent. When the former Labor government tried to impose new regulations on the media, the threat was obvious and we jumped up and down and they backed off.

“But this more recent stuff has been less obvious and has been cloaked by the need to counter terrorism.

“So the initial reaction to Section 35P was muted and in fact some in the media even welcomed it.”

Oakes said there were legitimate concerns that the undercover operations or the identities of agents could be exposed, putting them and the nation in danger, but he argued journalists also needed to be able to report on and hold to account security agencies.

Citing the example of the Mohammed Haneef case in 2007, when an Indian doctor living on the Gold Coast was falsely accused of aiding terrorism, Oakes said media scrutiny of the security agencies was an important check on their power and essential to prevent corruption, incompetence or the perversion of justice.

“There are clearly occasions when reporting matters connected to an SIO [special intelligence operation] would be in the public interest, as long as ASIO agents and legitimate security operations were not endangered,” Oakes said.

“But we didn’t take up the issue at the start, and once a law like this is on the statute books, winding it back becomes very difficult.

“If we’d gone into battle earlier, seriously and united, we might have got somewhere. We were too slow to recognise the threat, too late and probably too polite in pushing back.”

‘Some optimism’ about new Prime Minister

Oakes said the same thing had happened with the metadata laws, as media organisations had realised the threat to press freedom too late.

He said the campaigning by the MEAA and others in the Right To Know coalition had resulted in a slight improvement to the laws through the requirement for warrants to be issued before a journalist’s metadata could be accessed to identify a source.

But he said the reality was that journalist would have to find ways not to leave an electronic trail so they could protect their sources.

“We have to change our behaviour. It’s either forward to encrypted messaging applications or back to typewriters and signalling sources by moving pot plants around on our balconies.”

Oakes said he held out some hope for improvement under the Turnbull government as the Prime Minister was not only an ex-journalist who believed in the code of ethics and the importance of protecting sources, but his own experiences as a lawyer in the Spycatcher trial in the 1980s meant he may be more sceptical about the claims of spy agencies.

Journalists must lift their game

Oakes himself has been a fighter for press freedom all his career, but he said it should not be assumed that the general public were in journalists’ corner. In fact, much of the evidence suggested the opposite.

He said a free press needed to be a “respected press”, and that respect had been damaged by intrusions on people’s privacy and poor ethical behaviour like phone hacking.

Oakes should know: in an Essential poll this year, he emerged as the most trusted media commentator in Australia.

“What basis do we really have for assuming there’s widespread public sympathy when it comes to press freedom questions?” Oakes asked.

“The only way to guarantee it is to start winning back respect. Rebuilding trust.

“That obviously involves lifting our game, but I think we should also try to project a more positive picture of what we do and why. The significance of journalism and why it matters. I think that wouldn’t be a bad idea either.”

This was a theme that was also taken up by Peter Greste, in a pre-recorded video address (Greste had to pull out of the dinner to fly to New York to lobby the United Nations for a full pardon from Egypt).

Greste said press freedom was under its greatest threat for a generation, but the global wave of public support for him and his colleagues had been encouraging.

But he said this had been because he and his colleagues were ethical cleanskins: “we’d done nothing in our past to violate our fundamental ethical principles.

“So people backed us because they knew we had integrity, they could trust us, they knew that there was nothing we had done that would suggest that we were guilty of the allegations that were before the court.