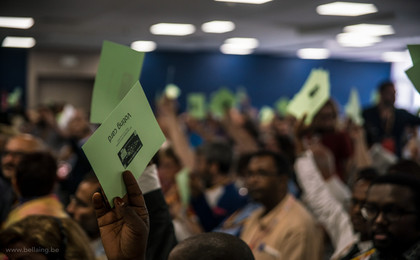 At the International Federation of Journalists' 30th World Congress in Tunis, affiliated unions unanimously supported MEAA's resolutions condemning the AFP raids on the home of a News Corporation journalist and the offices of the Australian Broadcasting Corporation, and urged the British and Australian governments to resist the extradition of WikiLeaks' publisher Julian Assange to the US.

"The indictments clearly seek to prosecute Assange for the receipt and the publication of vital information in the public interest, clearly at odds with previous decisions of the US Supreme Court to protect First Amendment rights.
The [IFJ] congress supports the call of our affiliates for the governments of the United Kingdom and Australia to resist the application to extradite Assange to the United States.
The congress asks the IFJ Executive Committee to:

"These raids are a grave assault on media freedom and the democratic right of citizens to be informed about the activities of their government.
We note with concern the recent passage of legislation through the Australian Parliament which seeks to restrict public interest reporting, criminalise the work of investigative journalists and punish whistle blowers who bring important information forward in the public interest.
Australia holds itself out as a bastion of media freedom, but these recent events seriously challenge that view and send a dangerous message to the world.
We call on the Australian Parliament to take urgent action to legislate for the protection of journalists and their confidential sources, and to end its system of mass data surveillance.
Democracy dies in darkness. It is vital that an appropriate balance be maintained between national security and the protection of free and fearless reporting in the public interest."

The resolutions can be downloaded here.