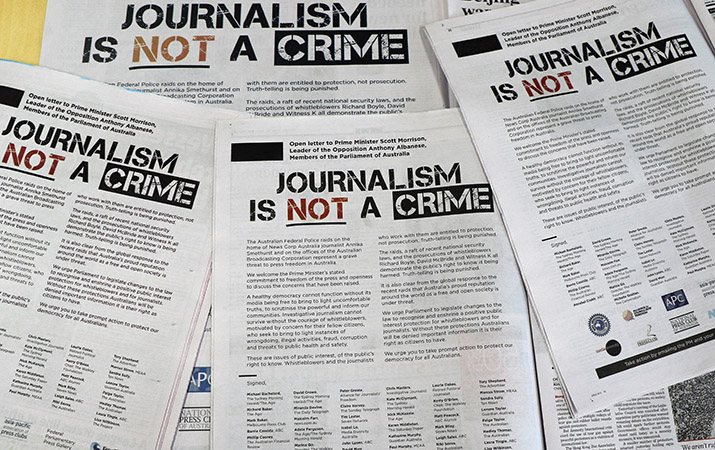 How the open letter appeared in daily newspapers.

Prominent Australian journalists have issued a public call for urgent changes to the law to provide better protection for whistleblowers and journalists.

In an open letter published in all capital city daily newspapers today and addressed to Prime Minister Scott Morrison, Leader of the Opposition Anthony Albanese and all Members of both houses of Federal Parliament, more than 30 leading journalists say prompt action is needed to protect our democracy for all Australians.

The call for legislative change follows raids by the Australian Federal Police last week of the home of News Corp Australia journalist Annika Smethurst and the offices of the ABC.

“The raids, a raft of recent national security laws, and the prosecutions of whistleblowers Richard Boyle, David McBride and Witness K all demonstrate the public’s right to know is being harmed,” the letter says.

“Truth-telling is being punished.

“It is also clear from the global response to the recent raids that Australia’s proud reputation around the world as a free and open society is under threat.

“We urge Parliament to legislate changes to the law to recognise and enshrine a positive public interest protection for whistleblowers and for journalists. Without these protections Australians will be denied important information it is their right as citizens to have.”

Add your name to the letter and email Mr Morrison, Mr Albanese, their local member of Parliament and Senators.