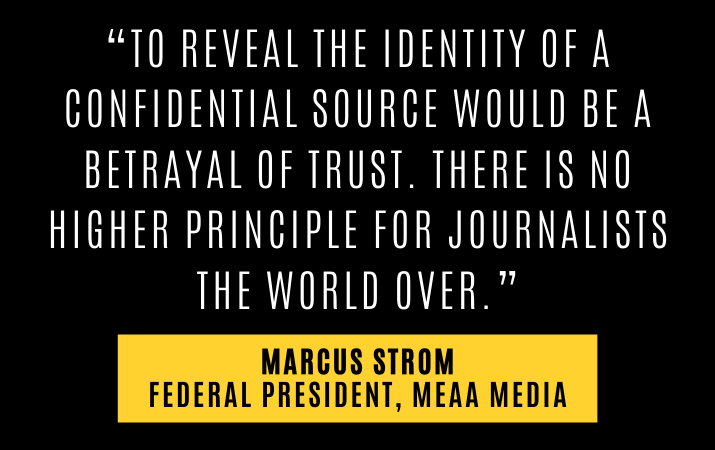 A current defamation claim in the Federal Court is seeking to compel two senior investigative journalists to reveal their confidential sources. The claim involves multiple Walkley Award-winning journalists Nick McKenzie and Chris Masters – both members of MEAA – over a story they wrote alleging a war crimes incident in Afghanistan in 2012.

MEAA Media federal president Marcus Strom says: “MEAA backs our members who are obliged to adhere to the MEAA Journalist Code of Ethics. Clause 3 of the Code says that confidences made to a journalist's source must be respected in all circumstances. There is no higher principle for journalists the world over.

“Journalists have been have been found guilty of contempt and jailed for maintaining this ethical principle. But they have not revealed the identity of their confidential source. To do so would be a betrayal of trust. It would have a chilling effect on journalism because whistleblowers would think twice about telling the truth if their identity is exposed.

“The principle of journalists’ privilege is already enshrined in Commonwealth ‘shield’ laws that protect journalists from being compelled by a court to name their sources. Shield laws exist in many countries around the world. To discard the shield at a time when the public’s right to know is already under assault would further damage press freedom in Australia,” Strom says.

“It is pointless to pursue this path in court because the outcome is already known: journalists cannot and will not reveal their confidential sources,” Strom says.