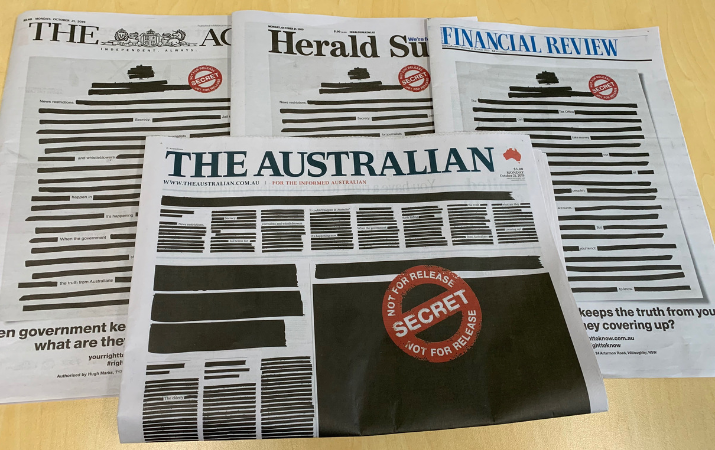 Newspaper front pages were blacked out on October 21 to demonstrate the impact of government secrecy.

MEAA has joined with publishers, broadcasters and other media organisations in an unprecedented united campaign for reforms to protect media freedom, whistleblowers and the public’s right to know.

The campaign was launched last night with advertisements on commercial television and continues today on the front pages of most daily newspapers and websites.

It aims to draw attention to the impact a raft of new laws are having on the public’s right to know what governments do in our name. In the past 18 years, the Parliament has passed 75 security laws under the guise of national security.

“The culture of secrecy that has descended through these legal provisions restricts every Australian’s right to know and goes well beyond the original intent of national security,” said MEAA chief executive Paul Murphy.

“Journalism is a fundamental pillar of our democracy. It exists to scrutinize the powerful, shine a light on wrongdoing and hold governments to account to the people, but the Australian public is being kept in the dark about matters that affect them.

“The police raids on the home of News Corp journalist Annika Smethurst and the headquarters of the ABC in Sydney were direct attacks on media freedom in Australia but they are just the tip of the iceberg.

“The time has come to wind back these excessive laws and to decriminalize public interest journalism and whistleblowing.

“The protection of sources must be enhanced, and the congested Freedom of Information system needs to be unblocked.”

But in many cases, whistleblowers have been punished and bureaucracies have attempted to suppress information from being made public.

MEAA is a member of Australia’s Right to Know coalition, which includes commercial and public broadcasters and publishers, and the peak organisations for subscription and free TV and commercial and community radio.

More information is available at www.yourighttoknow.com.au