MEAA condemns targeting of journalists by police and protesters 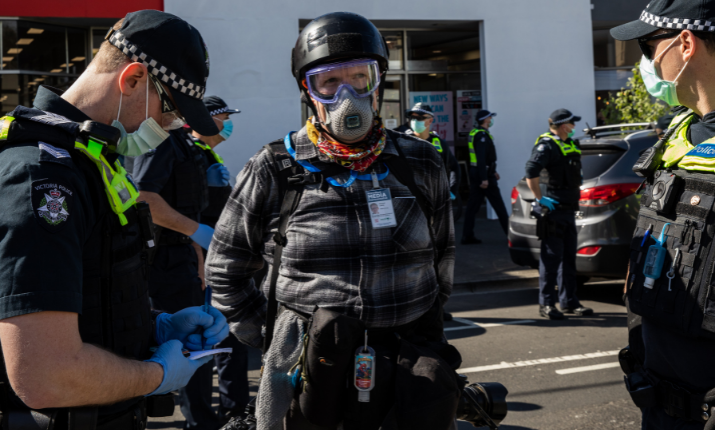 Journalists should be able to go about their work informing the public without facing assault from police or protesters, says the Media, Entertainment & Arts Alliance.

MEAA has written to Victoria Police to complain about at least four incidents when journalists were manhandled, capsicum sprayed and detained while covering an anti-lockdown protest in Melbourne on Saturday.

After a television reporter was assaulted several times while covering another protest in Melbourne yesterday, the union has also called on media employers to ensure that journalists are as safe as possible while doing their jobs at public gatherings.

MEAA Media section’s federal vice-president Karen Percy said it appeared as though media workers were being targeted by protesters and police alike.

“Journalists are neutral observers, simply doing a job,” Ms Percy said. “An attack on one journalist, is an attack on us all.

“Police and protesters must accept that the media provides an essential service, particularly during the pandemic, in keeping our community informed.”

MEAA is urging media organisations to review their safety protocols and to ensure proper protections are in place.

“Greater safety measures need to be put in place to allow professional journalists to their jobs,” Ms Percy said.

MEAA members were among those harmed on Saturday. Vision shows journalists being crash-tackled, capsicum-sprayed, hand-cuffed, cautioned and arrested, searched, and questioned before being released.

Despite being clearly identifiable as members of the media, some were deliberately targeted by police officers.

Yesterday, a reporter and crew were assaulted by protesters, including having urine thrown over them, being struck with a drink can and being held in a headlock. Threats and abuse were directed at other journalists as they reported on the protest.

“MEAA has written to Police Minister Lisa Neville, seeking assurances that Victoria Police members must make the effort to identify and differentiate working media from protesters and allow the media to do its job without fear of assault or intimidation by police,” Ms Percy said.

“The media must be allowed to do its job without fear of assault or intimidation by police.

“MEAA will also be contacting news editors to remind them of their obligations under workplace health and safety laws, and urging them to make their employees safe and secure when at work.

“Journalists and media workers have a duty and a responsibility to report the news and must be able to do so in safety, without the threat of intimidation or harassment.

“It’s also crucial that the community at large respects the work of the media and does not fall into the trap of believing baseless accusations of fake news that have led to violent physical assaults on working journalists in other countries.”