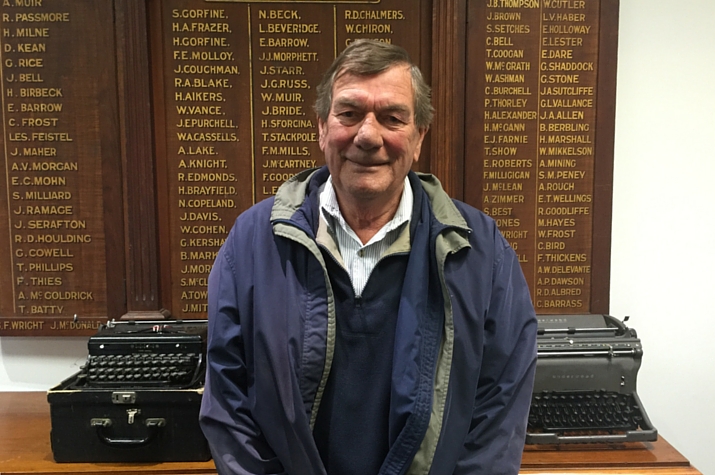 Brendon Cole has been a MEAA member at the Melbourne Cricket Ground for 27 years, as an ex-chief inspector at the Victorian Police, he brings with him patience when dealing with unruly patrons and drive to achieve successful outcomes when up against management in EBA negotiations. MEAA sat down with Cole recently to find out why being a MEAA member is important to him.

Before you started at the MCG you were the detective chief inspector in charge of the homicide squad for the Victorian Police. What brought you to the MCG?
I’d been out of the force for about 12 months and I spoke to an old friend who had been working at the ‘G for several years who asked if I wanted to come and help him out as they were short staffed. I started work in the bars, then I moved to the members. I stayed in the members until eventually I was running the members as a senior supervisor. What started off as very casual ended up with me being involved in just about every function at the ‘G for the last 20 years. I’m now looking after the media.

Take me through a typical day.
I arrive first and unlock the media section. I open up the booths and turn on the televisions - there are televisions everywhere. I make sure the people who are entering the restricted area are all properly credentialed. I make sure there is access to wifi and if anything goes wrong I ring the techs up straight away.
About an hour after the game is over, people start to drift away. Some are still writing copy, others are down interviewing players which could take around 45 minutes. Once the radio broadcasters have left I seal it all up, turn everything off and walk out the door.

I hear that you signed up to the union on your first day, why did you decide to become a member of MEAA?
I was a cop for 32 years and from day one I was a member of the police union. I needed to use union services back then for legal matters and the union provided it. So because of the union’s efforts for conditions and pay I was always a supporter of the union. So it wasn’t strange when I was asked to join MEAA once I’d left the force.
The boss of MCG’s casuals at the time was also very union orientated. He just gave me the papers for the union so I signed on the dotted line. We were a closed shop. Very few people would have been an employee of the ‘G at that time without being a member of the union. Now that’s changing because they have a different way of recruiting. It used to be word of mouth and now it’s done through a recruitment firm.

How do you make sure that the next generation of casuals at the ‘G get good conditions?
We have some very good unionists at the MCG. We talk to new and old employees and point out the benefits of being a member of the union. Your union fees cover more than just being in the union, journey insurance for example and that your union fees are tax deductible.
When new people get employed we point out to them that we have the conditions we have because of years of union members fighting for those conditions. A training rate for example. And I let them know that they’re benefiting from our efforts so they should sign up.

How has your previous profession informed your current role at the MCG?
I was very used to dealing with the public and in stressful situations, dealing with persons of both repute and ill repute. So to work at the MCG with people again wasn’t any great worry for me. I get along with most people. If you want to turn nasty, that’s ok, it doesn’t faze me. I think the G’s got their money’s worth out of me.

What are some career highlights?
Probably most importantly, the three previous EBAs - I was a rep on those. To win was pretty damn good because they were difficult negotiations. We were successful in negotiating proper outcomes including maintaining a minimum of four hours’ work and workers will now be paid for their shift if it is cancelled without at least 24 hours’ notice. We’ve continued to achieve and that is the highlight of my time working at the ‘G.

Why do you think it’s important to be a MEAA member?
If you can’t present a solid background to a powerful boss then you have little chance of achieving anything. Work satisfaction will go out the window. But if you have a union backing up what you believe then you have the weight of the union to represent you and argue the cause for you and hopefully come up with a resolution.