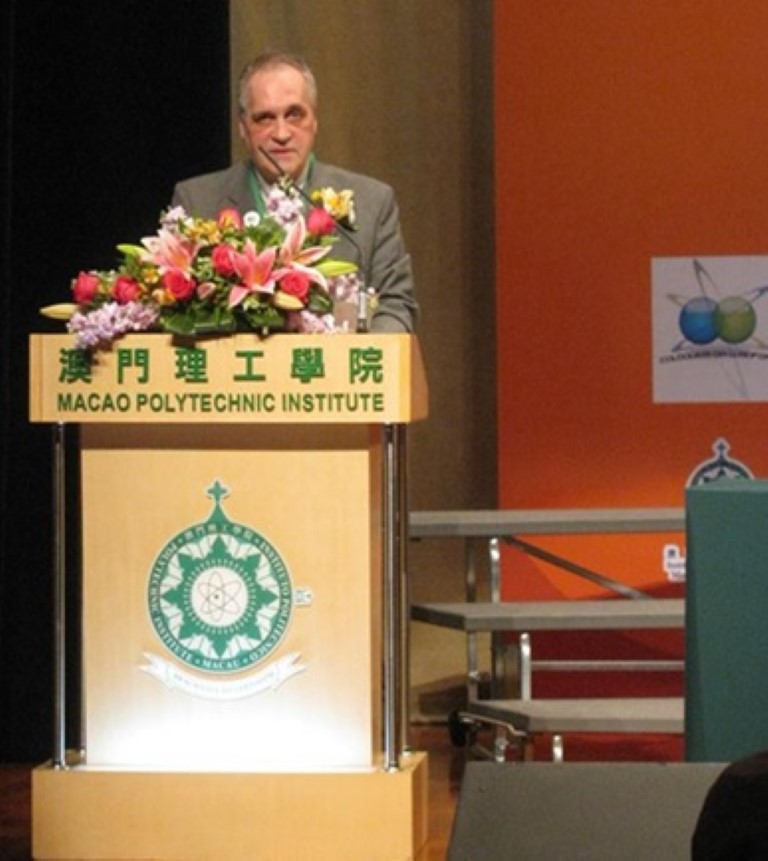 more than 50 yrs in print, audio and TV media, foreign correspondent and freelancer. Chrys Chrystello not only believes in multiculturalism, he exemplifies it: born from a family with Galician Portuguese, Brazilian and German, on his father side, and Portuguese-Jewish on his mother side. Published his first book in 1972 “Crónica do Quotidiano Inútil / Chronicles of the Useless Quotidian” (Poetry vol. 1). Chrys was conscripted as 2nd Lieutenant Officer in the Colonial Portuguese Army sent to serve on Timor on 1973 for two years, where he run the local Díli newspaper. Went to Australia in 1975 and adopted the country. Chrys was already into languages and politics and authored a political essay about Timor, before being appointed to an Executive post as Economist with CEM - the Macao Electricity Light Company, 1976. In Macao he also held various post in the radio network. Later, settled in Sydney and Melbourne as an Australian citizen where he lived permanently until 1996. After starting in radio in 1967, Chrys moved to political journalism in radio, TV and print. As a Foreign Correspondent worked for the Portuguese News Agency ANOP/LUSA, television (Hong Kong's TVB, RTP), Portuguese radio networks RDP, Radio Comercial, ERM, TDM/RTP, newspapers and magazines Jornal de Notícias, Primeiro de Janeiro, Sábado, EUROPEU and PÚBLICO, being also published in the Australian Journalist's Association flagship (The Journalist) and The Maritime Union, apart from researching and writing Australian-TV documentaries (mostly on East Timor). Between 1976 and 1996 wrote about the drama of East Timor when the world was refusing to see it. In Australia, he also worked as Journalist for the Dept. of Employment, Education and Training; Dept. of Health, Housing and Community Services; and as a Translator and Interpreter for the Dept. of Immigration & for the NSW Dept. of Health. His interest in languages dates back to the early 70's when confronted with more than 30 dialects in East Timor. In Australia, learnt about traces of an Aboriginal Tribe speaking Portuguese Creole, inherited five centuries earlier when Portuguese Discoverers landed there in 1521-1525. A founding member of AUSIT (the Australian Institute for Translators and Interpreters) and a panel member of NAATI (National Accreditation Authority) since 1984, Chrys lectured Linguistics and Multicultural studies (to prospective interpreters and translators at UTS). With decades' experience in translation and interpreting as a Freelancer specialised in medicine, literature, linguistics, legal, engineering, politics, international relations, Chrys has published works and presented linguistic themes to conferences in places as diverse as Australia, Portugal, Spain, Brazil, Macao and Canada. In 1999, Chrys wrote his major political essay “East Timor: the secret file 1973-1975" sold out after three days. In 2000 e-published a monograph “Crónicas Austrais 1976-1996 Australian Chronicles”. He was an Assessor (external) for Portuguese Literature for the Australia Council at UTS (University of Technology Sydney, NSW, Australia); ACL Mentor (Association for Computational Linguistics for the Information Technology Research Institute) at the University of Brighton, UK; Reviewer for the University of Helsinki (Translation Studies Dept. Publications) and Assessor for REMA Project at University of the Azores (2008-2012) In 2005, completed a huge volume 2 of his Trilogy on the History of Timor, (>2,600 pp) “Historiography of a Reporter: East Timor 1983-1993” and “Cancioneiro Transmontano 2005” (a compilation of rhymes, stories, songs, poetry and old North-eastern Portugal traditions)”, still keeping his interest in teaching multiculturalism, English and translation studies. During 2007-2014 has translated Azorean authors into English such as Daniel de Sá ("Santa Maria Island Mother Island", "Dead Houses’ Shepherd “S. Miguel, the carved island”, “Terceira Island, Land of the Brave") Manuel Serpa’s ("The Pico vineyards") having also revised and prefaced “A Freira do Arcano, Margarida Isabel do Apocalipse” ed. Publiçor, Ponta Delgada, Azores " by Mário Moura. Also translated into English Victor Rui Dores “Ilhas do Triângulo, coração dos Açores (Numa Viagem com Jacques Brel)”. He published (March 2009) “ChrónicAçores: Uma Circum-navegação”, vol. 1 of a trilogy, bearing on his journeys around the world. In March 2010 gave a speech at Academia Brasileira de Letras Volume 2 “ChrónicAçores: Uma Circum-navegação”, came out in 2011 edited by Calendário de Letras, and he translated the Bilingual Anthology of (15) Contemporary Azorean Writers. In 2012 translated Caetano Valadão Serpa’s “A lonely person is not enough people, the sex and the divine”. In 2012 Chrys published a volume of his Works of poetry “Crónica do Quotidiano Inútil / Chronicles of the Useless Quotidian” commemorating his 40 years of literary life. On that year came out a CD-book of his trilogy on the History of East Timor, 3,760 pages. On October 5, 2012, was admitted as Scholar (Academic Correspondent) of AGLP (Academia Galega da Língua Portuguesa) In 2013 wrote monthly for PnetLit and published the 3rd edition of “Crónicas Austrais/1976-1996 Australian Chronicles”. In 2015 reviewed and compiled the book by Nobel Prize Laureate, Dom Carlos Ximenes Belo, “Padre Carlos da Rocha Pereira. Missionário açoriano em Timor”, vol. 1 on the series Azorean Missionaries in Timor, ed. AICL and Moinho Terrace Café In 2017 published his 2-volume opus magister “Bibliography of Azoreanity” 19,500 entries, with 1600 pages. On that same year, he reviewed and translated into English the juvenile book “The lost world of EastTimor / O Mundo Perdido de Timor-Leste” by José Ramos-Horta e Patricia Vickers-Rich In 2018 published “Fotoemas”, a photo e-book, with pictures by Fátima Salcedo and poetry by Chrys Chrystello edited in e-book http://www.blurb.com/books/8752953-fotoemas, and reviewed and compiled the book “Missionários açorianos em Timor” vol. 2 de by Nobel Prize Laureate, Dom Carlos Ximenes Belo, vol. 2 on the series Azorean Missionaries in Timor, ed. AICL and Câmara Municipal de Ponta Delgada, He has finished the final draft of two-part vol. 3 “ChrónicAçores Uma circum-navegação: De Timor a Macau, Austrália, Brasil, Bragança até aos Açores” a chronicle of his wandering by the world, as well as the final version of his Works of Poetry “Crónica do Quotidiano Inútil Chronicles of the Useless Quotidian” vol. 6. Had a few of his essays and poetry works published in Anthologies in 2017 He is the editor of the quarterly Cadernos de Estudos Açorianos which purports to divulge the Azorean authors Chrys has organised all 32 International Colloquia on Lusophone Matters (Colóquios da Lusofonia (www.lusofonias.net) in Portugal, Brazil, Macao Galicia, and The Azores. Nominated in 2018 2019 Vice-president PPdM - Oceanía - Movimento Poetas do Mundo Nominated Member of Pen International (Azores)