The real cost of making film and TV 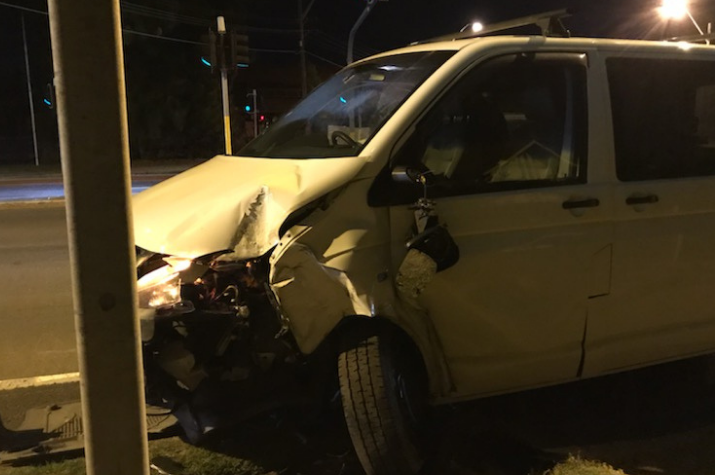 A young crew worker crashed his car into a telegraph pole in the early hours of the morning as a result of falling asleep at the wheel on his way home from work.

Through MEAA research, Australian crew have exposed the culture of punishing working hours that damage their relationships and health, driving many to quit the industry.

WHY THERE’S NOT ENOUGH CREW, AND WHY MORE COULD WALK AWAY

Increased demand for screen content has resulted in a worldwide shortage of skilled, experienced film crew, something that is being keenly felt in Australia. This has seen a long overdue increase in wages in some positions, and industry stakeholders are looking for ways to train new workers to supply more productions. However, in response to a question about how they saw their future, one in four crew said that they were looking to leave or retire.

Many crew see the industry as a rewarding place to work. Crew members enjoy exercising their talent, skills and experience as part of a creative team, as well as the satisfaction of being able to show the end result to an appreciative audience. Working together to overcome the unique challenges of each production breeds a camaraderie that crew value highly.
However, the costs of working in the industry are profound and deeply felt. Basic human necessities like the need for sleep, the need for friends and family, and the need for safety are significantly compromised by the working culture of the industry.

THE COSTS OF LONG HOURS 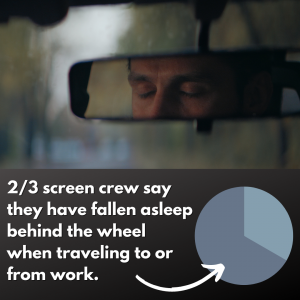 Crew point to the industry’s all-consuming long and unsocial hours as the main driver of its negative effects. When asked about the costs of working in the industry, two in three said it was damaging to their relationships and families. One in three said that it affected their physical health, and one in four their mental health.

Responses to MEAA research also point to immediate risks to crew safety. An alarming two-thirds of respondents said that they had fallen asleep behind the wheel when travelling to or from work.

Crew nominated dozens of practices in screen production that contribute to dangerous fatigue, including back-to-back long weeks, 12 plus-hour days, changing start times, difficult locations, working at night, inadequate or interrupted recovery time, unpaid overtime in some departments, and stress caused by undisciplined decision-making, understaffing and insufficient budgets. It is common for these drivers of fatigue to be layered on top of each other, creating acute safety risks.

Crew see falling asleep behind the wheel as an extremely important issue (nine in ten) and were in virtually unanimous agreement that employers needed to do more to prevent it. However, these near-miss incidents usually go unreported unless they result in a serious accident, and the industry does not monitor or collate information on safety incidents across productions.
Beyond the immediate physical risks, long hours take a long-term toll on mental health. Research has shown that long working hours are associated with stress, depression and suicidal ideation. In particular, research by UK’s Film and TV Charity shows that the culture of long, intense working hours has a negative impact on mental health for film workers, in line with crew responses to MEAA’s research.

THE COSTS OF WORKING AT NIGHT

Impact on individual
1.Isolation from family and friends
2.Physical and mental health
3.Can’t work on surrounding days
4.Cost of childcare and other costs

The costs of working at night also fall heavily on crew, and the overwhelming majority support the re-introduction of night loadings in parts of the industry where they have previously been taken away.

The absence of loadings has a significant effect on morale, signalling to crew that the production doesn’t recognise or value the additional difficulties they face at home or at work caused by its decision to work at night.
In the experience of Australian crew, the absence of night loadings makes bad schedule management worse and encourages long hours. Night loadings act as an effective disincentive for poor production management, as their impact on the budget forces producers to look for alternatives to night work and to reduce hours worked in the penalty zone to when it’s absolutely necessary. 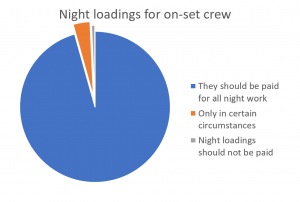 THE INDUSTRY NEEDS TO CHANGE

The industry’s current working culture is not compatible with retaining and growing a skilled and experienced workforce in the long term. While many crew love their work and find it rewarding, the long and unsociable hours, combined with wages that are uncompetitive with other industries and inadequately resourced management capacity, make working in the industry damaging to their relationships, families, physical and mental health, and safety.

MEAA members want change and will work together to achieve it. Our agenda is to advance living wages, living hours, and safe and professional workplaces. We challenge producers and other industry stakeholders to work together with crew to create a production model and working culture that respects the basic human needs of the people working in it and that will sustain our industry for the decades to come. See our priorities for  industry reform here.

Media Entertainment and Arts Alliance is the union for all crew working screen production.