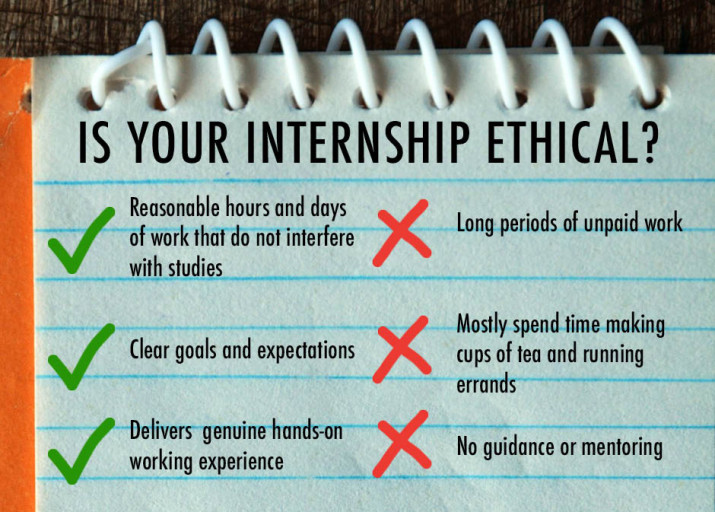 MEAA has produced new guidelines to prevent exploitation of students keen to work in the media.

When Fairfax Media advertised this week on Facebook for applications for journalism internships in its Sydney newsrooms, it probably wasn’t prepared for the backlash it copped on social media.

For generations of young media workers, internships have been an accepted pathway to a job doing what they love.

But as the numbers of journalism and communications graduates from tertiary institutions skyrocket while permanent jobs in print and broadcast journalism decline, complaints are growing about internships being used as a way to exploit young people keen to break into the industry.

MEAA is not suggesting this is the case in the positions being advertised by Fairfax (which have since been withdrawn from Facebook), but the case does highlight how unpaid internships are a grey area and an ethical minefield.

“Internships have long been recognised as a valuable way for students and graduates to gain meaningful practical experience and training in their chosen career in media, communications and related fields – but they should never be a source of free labour,” says MEAA Media director Katelin McInerney.

MEAA has responded to these concerns by launching a new drive to educate both interns and their employers about their legal rights.

Working with Interns Australia, MEAA has created a new set of guidelines about legal internships and will also seek to investigate complaints and to assist students who believe they have been treated unethically or illegally while undertaking an internship.

A report on internships by the Fair Work Ombudsman in 2013 found that unlawful unpaid work was particularly prevalent in the media industry.

In one high-profile case in 2015, Melbourne-based Crocmedia was fined $24,000 in the Federal Court for breaching minimum wage provisions by failing to pay two young interns who worked in its office for 20 months between 20111 and 2013.

McInerney says the new guidelines have been developed to clearly delineate a genuine learning experience from one that simply takes advantage of young graduates desperate for a foot hold in the industry.

“Far too often, unpaid work is used by media companies to take advantage of young graduates desperate for a foothold in the sector. This is not acceptable.

“Internships should provide practical hands-on industry experience in a closely supervised environment for a finite period of time – not an opportunity for an employer to replace paid workers with unpaid ones.”

The new MEAA guidelines make it clear that internships should usually be paid. However, there are exceptions: when the internship involves volunteering with a charity or NGO, or if it will result in a credit towards a tertiary qualification.

But even in those cases, hours and days worked must be reasonable so the internship does not interfere with study commitments and still allows time to pursue other paid work. 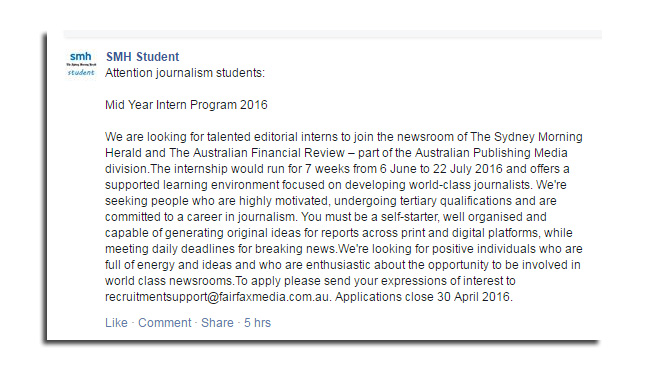 A screenshot of the Facebook advertisement by Fairfax  which caused a storm on social media.

The new guidelines prepared by MEAA have deliberately been written so they are simple to follow and to help define what is ethical and lawful internship.

In addition to informing students of their rights, McInerney says MEAA wants to work with employers to reach common agreement on how interns are employed in the media industry to prevent exploitation.

The union has written to tertiary institutions to seek opportunities to raise awareness among media and communications students of their rights.

The initiative by MEAA has the full backing of Interns Australia.

“With no clear laws on internships in Australia, these guidelines achieve two goals – they support employers to provide fair and quality internships and they provide a reference point so that interns can evaluate their arrangements in the arts, media and entertainment.

“We are hopeful that through steps like the MEAA guidelines, we can make Australia the world leader on this issue.”

Students who have a complaint about a media internship should contact MEAA Member Central on 1300 656 513 or fill out the complaint form on the MEAA Ethical Internships campaign page.