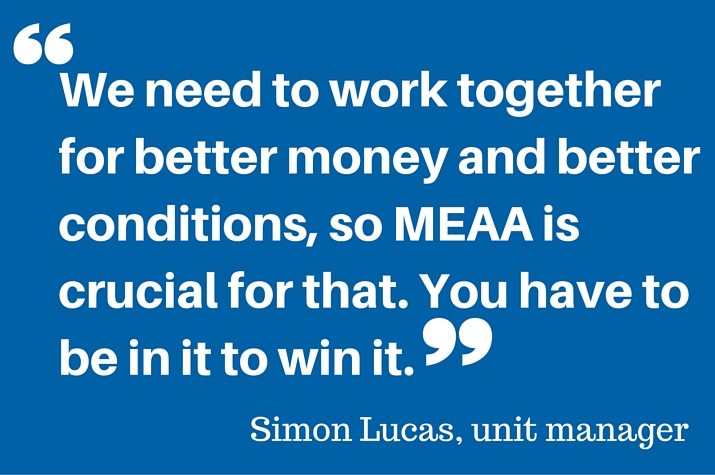 Simon Lucas is a unit manager and has worked on some of the biggest films shot in Australia including The Matrix and Wolverine. He chats to MEAA about why he's a proud member and dispels a few mysteries about the unit department for us.

What’s your role?
My current role is unit manager. As a department, we provide services to cast and crew. That could be anything from providing vehicles that are needed, to the creature comforts that the cast or crew need. Sometimes I think other departments are the best people to speak to about what we do. In a nutshell we set up, we service and we pack up at the end of the day.

When you are given a script or a production, what is your starting point?
The starting point is always with the production manager, they will let me know what they have in the budget and what’s required from other departments. If you get an A-lister for example, you will need a certain standard of green room. Also how many vehicles I can have and how many people I can have will be reflected in the budget.

Take me through a typical day on set.
We are the first to location in the morning. We set up early for make-up and costume and make sure we’ve got what’s required from making sure the location is secure enough to ensuring you can fit equipment in the service vehicles safely (grips, electrics, camera etc) to service the location.

Why do you think not a lot of people know what the unit department does?
Because it’s always dark when we turn up (laughs). I suppose because our role is a lot more general than say camera or grip departments. By the time all the other crew arrive, our busy periods are over so maybe that’s why many crew members don’t see exactly what we do. I’m working on a TV show at the moment, and that role will be different to say a war film. We have different roles at different times for different productions.
Our hours are only influenced by other people. We need to be here first in the morning and last in the evening to service the other departments.

How did you get your start in your industry?
I had a friend in the film industry working on a film in Western Australia at the time, so he told me to get my truck licence to get a job – and that’s how it started. And I just kept going. I came over the eastern states and just carried on from there. And it’s all I’ve been doing since.

What are your career highlights?
The Matrix films and The Thin Red Line. It’s always great when you can travel interstate or overseas. I worked in Jordan on Red Planet. Japan on Wolverine. Those places were fantastic. And I think that’s what a lot of it is about and why so many people do it because you can go to interesting places and get paid well and have a good time. I mean the work is the same, but it’s nice to be in a different environment. One of the best people I’ve worked with was Baz Luhrmann. He is so supportive of the industry.

Any interesting or unusual requests in your time?
These generally come from the cast i.e. Hollywood A-listers. They’re so much more demanding or maybe their PA’s are. Nothing unusual, but just the extravagance that some people require that may well go unused, like gyms on set, saunas and spas standing close by. Pure extravagance really.

What advice would you give to someone wanting to get into the industry – particularly in unit?
Have enthusiasm. One of the issues we have is that pay hasn’t kept up with the cost of living. I know the dollar was really high, so there was a distinct lack of overseas work coming into the country. That’s changed a little bit now, but rates have stayed relatively low.
Anyone who comes into the industry needs to be aware that it’s a lot of hard work and a lot of long hours. The rewards are there if you put the time and effort in. I would recommend an open mind.
Some people come into our department and then move into other creative departments. Unit is a great stepping stone for the industry. You get to see the whole set, see what it’s like, make the contacts and see where would be the best fit for you.

What does being a MEAA member mean to you?
We need to work together for better money and better conditions, so MEAA is crucial for that. You have to be in it to win it. If you’re not part of it then you really can’t have any complaints.