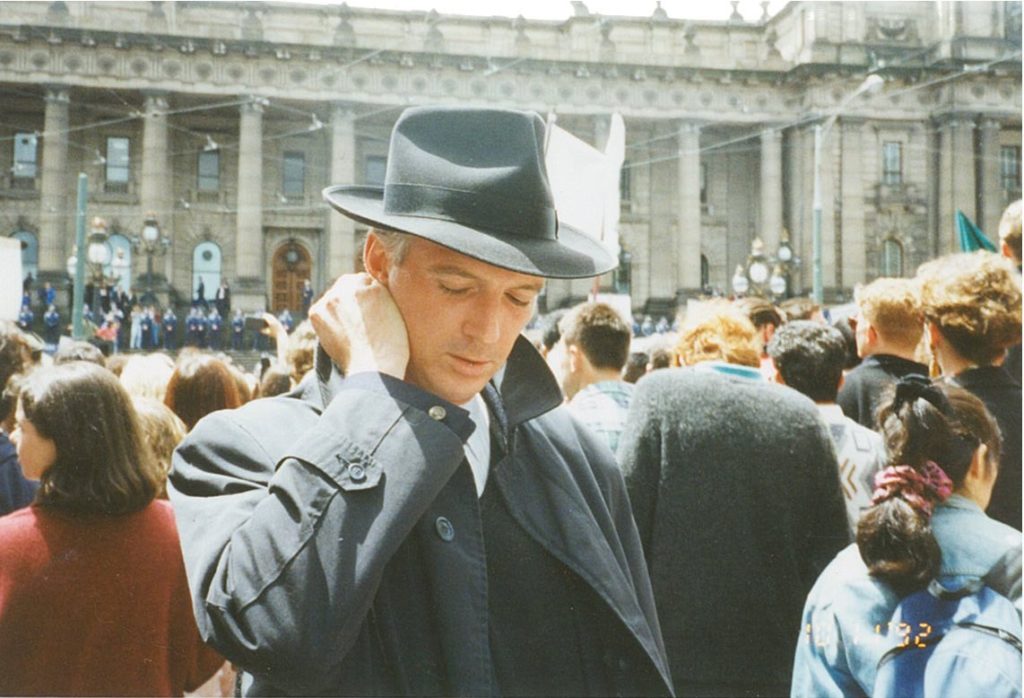 Mike Sutherland, pictured at a rally at the Victorian State Parliament, in the early-1990s.

Mike was born in Melbourne in 1956 to the Sutherland family – Valda, George and brother, Denis.

He started his journalism career as a cadet for The Age, before moving to the ABC and becoming their industrial reporter, working from a shabby, but cosy room in the bowels of the Victorian Trades Hall.

This was when he met his first partner, Margaret Burdeu who was a delegate to the Trades Hall for the Social Workers’ Union. In January 1988, baby Alice was born and Mike was delighted to be a father.

Mike was elected secretary of the Australian Journalists’ Association (AJA) Victoria branch in May 1985. He was very committed to developing the capacity of members to be more effective in their workplaces and in the union. He got the union more engaged with the broader union movement and increased its use of the Trade Union Training Authority, which saw members rubbing shoulders with and learning from meat workers, metal workers, printers and nurses.

He was a stickler for letting the members decide. This led to some interesting meetings, like one at The Age where the subs, draped over the filing cabinets at the back of the meeting, took 40 minutes to re-write the resolution before the members could vote on it. Or the “all members” meetings occasionally held at Nicholas Hall in Lonsdale Street. Everyone who wanted a say, got it, while Mike would sit nervously on the stage jiggling one leg or another under the table. Some wags up the back would lay bets on which leg would jiggle first.

Mike reorganised the branch’s finances to increase the number of organisers from one to, eventually three. He purchased the Victoria branch’s first property, a terrace house in Fitzroy which he converted to offices. He broadened the focus from the bigger media outlets to better involve suburban, regional and freelance journalists.

Mike and the WA president, Norm Taylor were central in bringing change to the national AJA leadership, supporting Chris Warren to become federal secretary. While Chris and Mike had their differences, together they modernised the union and made sure its member’s rights and interests were respected as the media went through profound changes.

A critical way to improve the pay of journalists, artists and photographers was through winning a better share of increased profits from the rapid introduction of new technology. In 1980, the AJA was the first “white collar” union to get an additional payment (6 percent) for the use of “visual display technology”, after a national three week strike by journalists on the major daily newspapers.

Over the next 10 or so years, the union campaigned to extend the allowance to all workplaces and for further increases for new uses of computers to lay out and “copy fit” stories to the page, thereby eliminating typesetting (to the understandable grief of the Printers’ Union whose members lost jobs as a consequence).

Mike went out of his way to improve relations between the AJA and other unions in the media - the Printers’ Union, the metal workers (AMWU), the Australian Theatrical and Amusement Employees' Association (ATAEA) in commercial TV, and the ABC staff union. He thought that affiliation with the Victorian union movement through joining the Trades Hall Council would also help this and would further develop AJA members’ capacity to campaign for better pay and conditions.

Mike decided to hold a ballot of all Victorian members on whether or not we should affiliate with Trades Hall, reasoning that we wouldn’t get the full benefits of affiliating if the members were cold on the idea. He established an “eminent members” group led by senior working journalists and the AJA’s former federal secretary Col Brennan. Their report recommended that there were more benefits than not in joining, such as access to OHS experts and official recognition by other unions when AJA members needed to take industrial action.

Mike then set out to meet with as many members as possible, including pretty much every newsroom in Melbourne and an extensive road trip through regional Victoria. The vote was decisive: just over 80% of the total membership voted and, of them, 80% were in favour.

The 1980s and 1990s saw the pace of change in the media landscape snowball, and it hasn’t slowed since. Mergers, closures, new mastheads, new technology, new owners, meant the union needed to be smart and fleet to keep up. Major issues, like new technology meant new problems to address, such as repetitive stress injuries that were plaguing newsrooms. The Herald & Weekly Times (HWT) members led the way, getting the company to engage consultants and redesign desks, chairs and work flows.

In 1986, the HWT Group’s board of directors announced the company was on the market. Rupert Murdoch’s News Ltd, a third level media player in Australia at the time, announced they were interested. But because the merger would have serious ramifications for media diversity, it would require government approval.

Mike, together with a very principled and brave Paul Chadwick, then a senior writer for The Sun, began a lobbying and public campaign to oppose such a big concentration of Australia’s media in one company.

I remember them returning from a meeting with then Victorian Labor Premier, John Cain who, while generously hearing them out on the perils of such concentration of media power in the hands of News Ltd, responded succinctly to their request for him to lobby his Federal counterparts to oppose the merger with, “Do I look like a (expletive deleted) idiot?”.

Another important campaign about media ownership in the late 1980’s and early 1990’s was led by journalists at The Age. The Maintain Your Age campaign aimed to block the Fairfax board from selling The Age to the notorious British media mogul, Robert Maxwell. It succeeded, with support from the public and the AJA. Three years later, the campaign was revived to oppose a consortium that included the Canadian tycoon Conrad Black and Kerry Packer from buying Fairfax. A public rally was held in Melbourne's Treasury Gardens where former prime ministers Gough Whitlam and Malcolm Fraser appeared together to back the Maintain Your Age campaign. Ultimately, the consortium succeeded in purchasing the company but not before Packer was forced to withdraw.

Introducing new benefits and taking on the ‘spectre of Wapping’

Mike wanted to challenge unequal pay in the industry. Suburban newspapers paid much lower rates than the metropolitan dailies for identical work. Yes, the product was different, but why should that mean such a huge pay gap? Mike, assisted by a very talented researcher, Rosemary Kelly, spent a year putting together a cogent argument backed by facts and witnesses and won the case for equal pay in the Victorian Industrial Relations Commission. The employers announced an appeal, which led to members walking off the job and picketing their workplaces. The strike lasted 3 weeks, except for the Melbourne Times Group who agreed to pay parity. Cruelly, the AJA lost the appeal.

The Victoria branch played a leading role in introducing new benefits for workers, like universal superannuation. A one day strike by AJA members at The Age newspaper paved the way for its introduction into all the AJA’s industrial awards Australia-wide. Before that, while some media companies offered some employees superannuation, it was far from universal and some funds were downright dodgy.

Mike was a founding director of the Journalists Union Superannuation Trust (JUST, now Media Super), the journalists’ industry superannuation fund. While the major employers, Fairfax and News Limited agreed to pay superannuation, they refused to play ball in helping establish the fund. Rural and smaller publishers, however could see the benefits of having an industry fund and helped make it happen.

Mike understood that, as a leader he was only as strong as his members. The stronger and more committed members are, the easier it is to ask management to address their concerns. The heart of the union is its’ workplace committees, or house committees in AJA jargon. When David Glanz, the president of the HWT house committee, was involuntarily retrenched during one of the first (but certainly not the last) mass redundancies, members saw it as an attack on their house committee.

The members walked out, formed a picket line, asking other workers not to cross.  They stopped the papers from being distributed for 3 long days and nights, while Mike and others talked to the company. The company dug in even more and it was clear that it would be a long strike to get David back to work.

The spectre of Wapping hung over the talks. In Britain a few years’ earlier, Rupert Murdoch had smashed the printers’ and journalists’ unions and set up company unions in their place. Mike understood that, while we weren’t prepared for that sort of a fight, the company was.

The members meeting when Mike had to break the bad news that negotiations weren’t getting anywhere and recommend that they return to work was heartbreaking. We couldn’t get David back by using the courts, either. Delegates’ rights and unfair “unfair dismissal” laws are still important issues for the union movement to this day.

Mike was also important in the formation of the Media, Entertainment & Arts Alliance, the result of a merger of the AJA, Actors Equity and the Australian Theatrical and Amusement Employees’ Union (ATAEA). In 1992, he became MEAA’S first Victorian joint secretary, with the former ATAEA secretary Eve Anderson.

In 1992, Mike was one of four people representing the International Federation of Journalists (IFJ) on a visit to Russia, the Baltics and Ukraine. They were looking at the state of journalist unions in the former Soviet Union and encouraging vying groups to come together to make strong, stable unions.

Move to Sydney — and beyond

Mike became a national assistant secretary in 1993, moving to Sydney and working with members in commercial TV and radio, the ABC and SBS. During this period Mike and Margaret separated.

Mike and Sarah Gibson, who had met on the Russian delegation, returned to live in Moscow in 1995. It was the “wild west” years, being bumped up against with guns in the supermarket, food shortages, and a car bomb outside their flat, with it all culminating in the second White House coup. It was history in the making and Mike loved it.

They then returned to London and Michael freelanced in the early days of the BBC’s radio 5live - on a show called Up All Night. Later that year, Mike returned to Sydney to become the executive officer of TEAME, a group training company in the media and arts’ industries.

A few years’ later Mike and Sarah returned to Melbourne to work at the ABC. Mike was working on merging the TV and radio newsrooms, which was a something of an irony as 20 years’ earlier he’d been involved in dividing the newsroom into two.

Mike and Sarah had two children, Eleanor and Joe.

Mike moved to Worksafe Victoria for several years then, taking the opportunity of a redundancy, the family moved to London and he again took up casual journalist’s work. In 2007, Sarah and Mike separated and he returned to Melbourne as the executive officer of the Return to Work Unit at Victorian Trades Hall. This dedicated team worked with injured workers and their employers to help them back to work.

In recent years, Mike caught up with a former workmate Ruth Frenzel and they commenced a very happy relationship. Ruth owns a horse breeding stud and Mike took to playing the country laird, much to the amusement of his city-slicker friends. Ruth even managed to get Mike on a horse for riding lessons.

My abiding memory of Mike was his steadfastness when members needed him. He was principled, smart and about as good a union secretary as you could get. He will be missed by many, but especially his children Alice, Eleanor and Joe, his father George and partner Ruth.