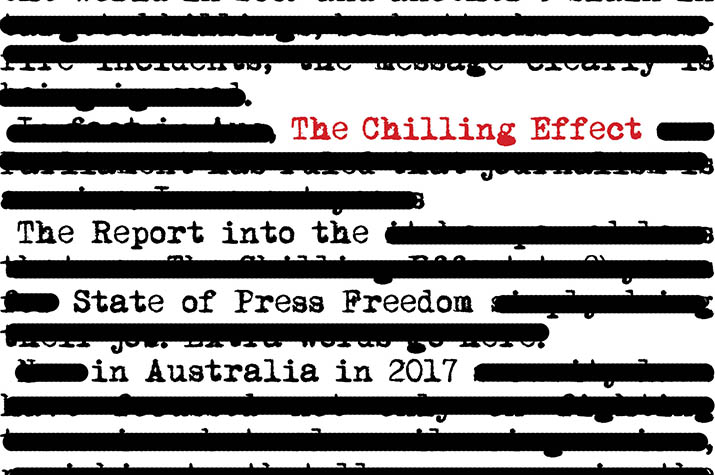 The AFP access a journalist's phone call data without a warrant in a secret hunt for whistleblowers. Asio admits to spying on journalists. Jail terms for public interest reporting to be extended to AFP operations. Defamation actions that don't require the plaintiff to prove whether their reputation has been damaged. Three states that refuse to prevent journalists being forced to reveal their sources. Media organisations engage in the time-worn failed exercise of slashing staff in order to achieve cost-savings rather than investing in smarter solutions. Courts decide what is in the public interest by suppressing media reporting. Nine Australian journalists are murdered and not one killer brought to justice.

These are some of the press freedom issues catalogued on MEAA's latest annual report into the state of press freedom in Australia. The 2017 report, entitled The Chilling Effect, notes that the past year has seen an endless array of champions of free speech say much but do nothing to protect and promote press freedom.

"For it is the parliament that created Journalist Information Warrants, as part of the introduction of mandatory two-year metadata retention. The parliament has now legitimatised the government secretly using metadata to pursue whistleblowers who reveal government stuff-ups.

"The champions of press freedom need to do more than cloak themselves in glib phrases. Genuine roll back of laws that undermine press freedom is vital if genuine democracy in Australia is to function," Murphy says.

Download a printable copy of The Chilling Effect - the State of Press Freedom in Australia in 2017 or read it online at pressfreedom.org.au.