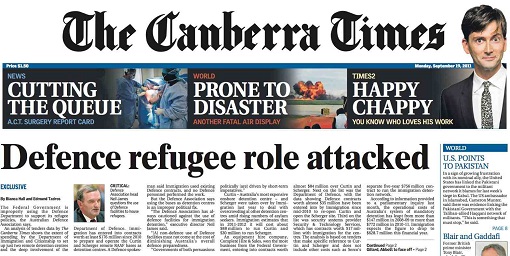 MEAA understands that 12.6 full-time equivalent positions, including 10 from editorial, are proposed to be cut. The number of photographers will be halved. The remaining journalists will be expected to sub-edit their own copy. The paper, published as a broadsheet for 50 years, will change to the "compact" format. The Cooma-Monaro Express and Jindabyne's Summit Sun local paper will close with the Queanbeyan Age to merge with Queanbeyan's The Chronicle and become a free weekly.

MEAA Media director Katelin McInerney said: “The union condemns the scale of these cuts, which represent one-in-six members of the editorial workforce at the Canberra Times, one of the last remaining Australian broadsheets.

“When iconic and historic mastheads like the Canberra Times lose reporters and photographers there is a direct loss of local news reporting because there are fewer staff on the ground involved in newsgathering and the vital role of scrutinising the powerful and holding them to account," McInerney said.

“Canberra Times editorial staff have been at the forefront of quality, investigative journalism both in their region and nationally and these cuts will hurt their ability to deliver the same quality coverage for their readership,” she said.

MEAA calls on Fairfax to look beyond short-term savings gains and invest in quality journalism and the journalists who produce it.