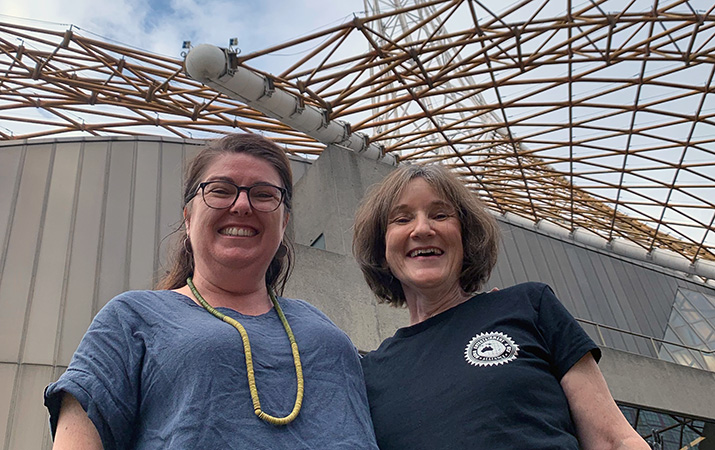 They will take office after last month’s elections which resulted in 28 new faces joining MEAA’s supreme governing body, the Federal Council. There will be 12 new representatives from the Media section, nine from Equity, five from ECS and two from Musicians on the national body.

Fiona Donovan said she felt the time was right to put her hand up for the role of ECS federal president to inject new energy into the role.

She paid tribute to outgoing president David Turnbull and vice-president Sue Marriott for their hard work over several terms in what is often a “thankless” task.

“I can’t tell you how thrilled I am to have the support of so many members. The outgoing president and vice-president have done an amazing job but at the same time it’s great to have some new energy in the roles,” she said.

Donovan has worked in the Australian screen industry for three decades as a production designer and art director on productions ranging from local TV series like A Place To Call Home to offshore features such as Pacific Rim: Uprising.

As well as serving as a federal councilor, she has been a member of the offshore template agreement negotiating committee, Get Real on Rates campaign committee, and is vice-president of Australian Production Designers Guild.

Looking forward, she sees the key priority for the union in the screen sector as locking down new rates for local productions.

“I’m super excited with what we’ve achieved in the last year with the negotiation of an offshore screen agreement and hope can carry that through to the Make It Australian and Get Real on Rates campaigns.

“They’re completely interlinked because if we have the support of the government to tell Australian stories, then we have a sustainable and financially sound industry and then the producers can afford to get real on rates. So they go hand in hand.

“Demonstrating successes like these will engage more members and other people in the industry and the community to take part and get involved in the union. We’re growing so much in screen, and that’s how we will continue to grow.”

New ECS vice-president Rosemary Westmore is a casual worker and delegate at the Arts Centre Melbourne and has been a federal councilor since 2017.

She will be keen to take a similar approach to growing the union’s presence in theatres as has worked in screen.

“We want to face the challenges of our industry, like changes to technology, with a positive plan backed by the power of a united and growing membership,” she said.

“I’m proud to be contributing to that leadership from the heartland of Melbourne’s arts and entertainment precinct, where so many MEAA members make their living.”

Donovan said the combination of her and Westmore meant the hubs of the two industry sectors were now represented at the top of the union.

“The majority of screen members are in NSW and the majority of theatre members in Victoria, and Rosemary like me is in the thick of it and we’re both involved in campaigns and understand the issues.

“Rosemary has a very quiet but very clear presence and the respect of all the people who work with her. As a team, we bring fresh ideas and renewed energy . . . We’re as passionate about our industries as each other and keen to see how the campaigns we have done in screen can be translated to theatre.”

Under MEAA’s rules, the Federal Council is the ultimate decision-making body for the union. It meets every two years.

MEAA is structured on both sectional (industry/professional) and branch (geographical) lines. Member representatives are elected to our governing bodies as representatives of sections and branches as well as on a national basis to federal offices.

The Federal Council’s members also form the industry-specific MEAA section committees that communicate regularly to address issues, endorse strategies and actions, and share knowledge. MEAA members also elect the key office holders – the presidents of each section – who help form the 15-person MEAA Board that oversees the administration of MEAA between Federal Council meetings.

MEAA welcomes all the new federal councilors and office-holders and thanks the outgoing representatives for their service and hard work.