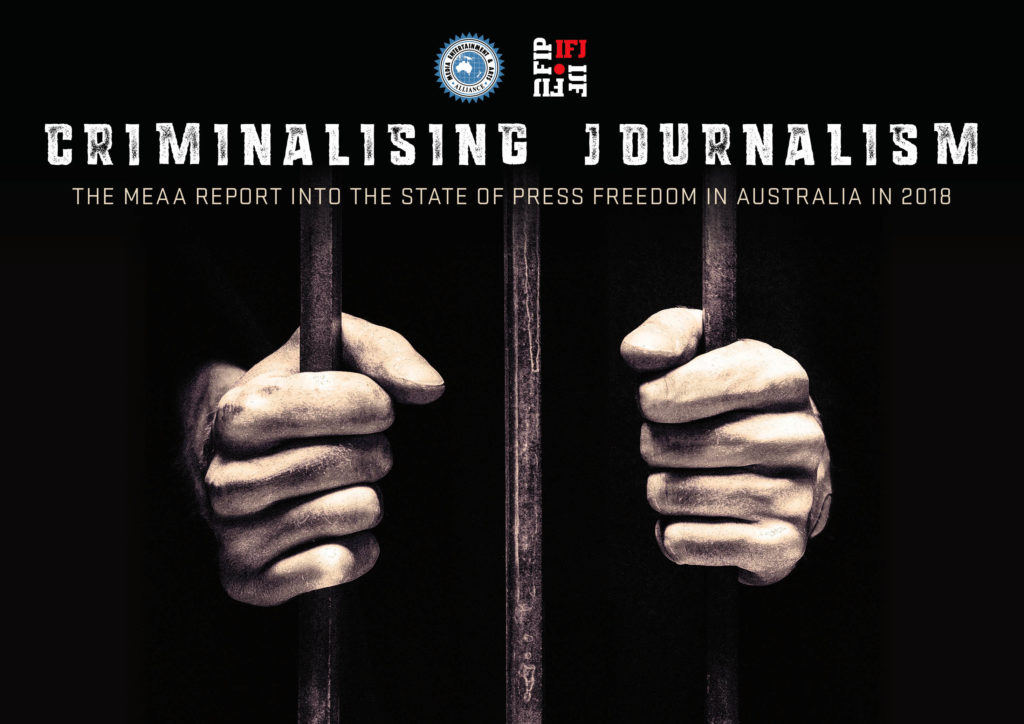 There’s almost universal acceptance of the maxim “Journalism is not a crime”. One exception is Australia’s parliament – it begs to differ.

Legislating for Australia’s national security has drifted a long way from the fight against terrorism. Increasingly, the Parliament passes laws that are about suppressing the public’s right to know and criminalising anyone who reveals information the Government would prefer was locked up.

How else can you explain how a draft law could be introduced into the Parliament that would allow for journalists to be locked up for 20 years for reporting information in the public interest? In the name of keeping the people safe, the Government now wants to keep information hidden from view, and punish the whistleblowers who disclose the information and the journalists who work with them.

In an even more egregious example of legislative overreach, under the guise of combating “espionage” and “foreign interference”, journalists, editorial production staff, media outlets’ legal advisers and even the office receptionist could be locked up for merely handling that information.

The draft law that heralded this appalling new assault on press freedom in Australia, the National Security Legislation Amendment (Espionage and Foreign Interference) Bill 2017 and the Foreign Influence Transparency Scheme Bill 2017, was rightly met with a storm of protest, not least from MEAA but also from media outlets, the Law Council of Australia and human rights organisations. Even the Commonwealth Ombudsman and the Inspector-General of Intelligence and Security were quick to identify and condemn adverse consequences of the legislation.

When four United Nations’ special rapporteurs (privacy; human rights defenders; freedom of opinion and expression; and protecting human rights while countering terrorism) made submissions protesting aspects of the Bills it was clear the Government had stepped far beyond Australia’s obligations under international law and human rights standards.

In the face of such a spectacular own goal, it is reasonable to ask how the Government could draft laws that could attract such opprobrium. After all, the Bills were overseen by the then Attorney-General George Brandis, approved by the Cabinet, and introduced to the House of Representatives by the Prime Minister Malcolm Turnbull, himself a former journalist.

The pushback against the Bills has culminated in journalists and media groups insisting on a media exemption – a move supported by the chair of Transparency International Australia, former NSW Supreme Court judge Anthony Whealy QC.

Sadly, the head of ASIO Duncan Lewis rejected the idea, saying exemptions would leave the door wide open for foreign spies to exploit, adding that it may also increase “the threat to journalists” – a startling claim from the spymaster, given that the Bill seeks to allow the Australian Government to be the one that imprisons journalists, muzzle their journalism and hound their sources.

It is also concerning that the new Attorney-General Christian Porter insisted that the government never intended to jail journalists for simply “receiving documents” – even though that is precisely what the Bill said. Porter added prosecutions of journalists would not proceed without his sign-off. But we’ve heard such an offer before - his predecessor George Brandis said he wouldn’t lock up journalists convicted under the Brandis-designed section 35P of the ASIO Act. And yet, 35P and its penalty of up to 10 years in jail, remains on the statute books.

It must be remembered that these latest “national security amendments” that criminalise legitimate public interest journalism are simply the most recent of an emerging pattern of government attacks on press freedom and freedom of expression, attacks that were initially triggered by 9/11 but which dramatically escalated with the WikiLeaks and Edward Snowden revelations about the levels of government surveillance and scrutiny of their citizens’ telecommunications data.

With governments around the world having been embarrassed by these disclosures about what they secretly get up to in the name of their citizens, there has come a response to keep these activities hidden and to tighten control over government information. Simply by declaring something is “secret” government can hide from legitimate scrutiny, intimidate whistleblowers, punish disclosure and muzzle legitimate public interest journalism.

With legislation being drafted offering 20 years jail for journalists, Australia has consciously wandered into the arena populated by serial press freedom abusers. Countries like Egypt, Turkey, China, Myanmar and Cambodia that lock-up journalists who disclose what their governments are up to.

Australia has done so, in part, because media organisations and the community have let it happen. Governments have used the “war on terror” as an excuse to fashion a legislative muzzle on the fourth estate in an effort to fend off legitimate scrutiny. Media organisations have been weakened by digital disruption and have, at times, put up an ineffective opposition to laws that curtail press freedom.

Indeed this year, in the first press freedom survey MEAA has conducted, it appears that journalists are also more relaxed about assaults on press freedom than the community at large. The survey, which was completed by working journalists as well as members of the public, highlighted a division between journalists and their audience about press freedom problems.

Indeed, national security laws ranked first as the most important press freedom issue for journalists (21 per cent) and non-journalists (20 per cent); followed by funding for public broadcasting, government secrecy, freedom of information and defamation. It may be a sign that journalists and their employers have been too complacent about the steady drip of assaults on press freedom, distracted by the other issues besetting the media industry.

Thankfully though, in the past 12 months there has been some good news on the press freedom front.

The Northern Territory Parliament passed shield laws recognising journalist privilege, with the new South Australian Government to follow. That will leave just Queensland as the only jurisdiction still demanding journalists disobey their ethical obligation to never reveal the identity of a confidential source thus facing the threat of a jail term or fine or both for contempt if they fail to do so. There has also been a recognition that the courts, particularly those in Victoria, need to address the use of suppression and non-publication orders if the judicial system is to operate openly and transparently.

Sadly, the highly politicised attacks unleashed on the ABC have continued. The ABC has been fiscally hurt to the extent that it is now struggling to meet its charter obligations, particularly in rural and regional Australia. But in the past 12 months, the political attacks have become more desperate and unhinged, resulting in lengthy inquiries that waste public money that could be spent on adequately funding the increasingly crucial role being played by public broadcasters in providing vital public interest journalism.

Crucial because, as we have also seen, the heavy round of redundancies have continued at the leading media houses – not least at Fairfax which triggered a snap seven-day strike by its journalists when it slashed 125 jobs – that’s one in four editorial staff – from its metro newsroom on UNESCO World Press Freedom Day in 2017.

But looking at the long-term, there is still plenty more to be done. A Senate Select Committee inquired into the future of public interest journalism and adopted most of MEAA’s recommendations, including the need for reform of Australia’s uniform national defamation law regime.

The digital platforms, whose power has done much to cripple media outlets while riding the coat-tails of latter’s editorial content, needs to be addressed. So too the other MEAA recommendations for government support for the media industry. There is much work to be done to ensure the media can meet the challenges ahead but, at last, government being forced to listen.

Encouragingly, the combined response by media organisations including MEAA to the government’s unjust national security laws has demonstrated that vital press freedom principles are important and must be championed.

Slowly, political leaders may be realising that the fourth estate must be allowed to continue to scrutinise the powerful if we are to continue as a healthy, functioning democracy. To do otherwise would mean Australia drifts into the ranks of a rogues’ gallery of press freedom abusers.

This is the foreword to Criminalising Journalism - the MEAA report into the state of press freedom in Australia in 2018. Read the full report here. Download a .pdf of the report here.