Speech by Shareena Clanton at the launch of Make It Australian 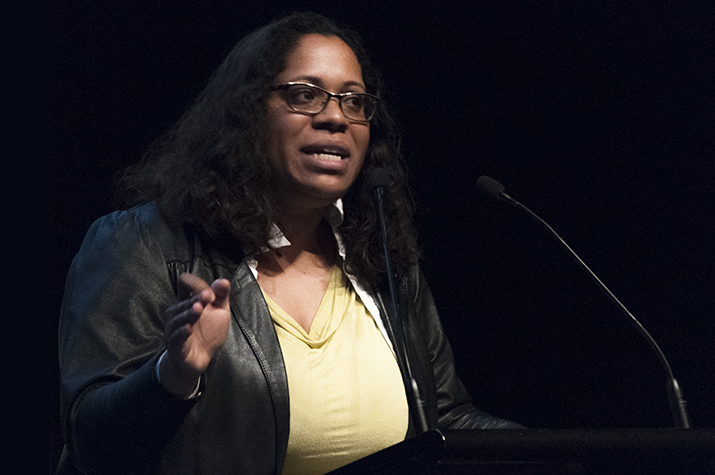 Indigenous performer and MEAA Equity member Shareena Clanton, whose credits include Wentworth, Redfern Now and Last Cab to Darwin, gave this passionate speech at the Melbourne launch of the Make It Australian campaign on September 18, 2017.

I want to first acknowledge the traditional lands of the Wurundjeri and Boonwurrung people in which we stand in and on as part of the Kulin Nations and pay my respects to the Elders past and present. I am a proud Wongatha-Yamatji and Noongar-Gitja woman from Perth, Western Australia and an acting graduate from West Australian Academy of Performing Arts.

6 years ago, I arrived in Melbourne from Sydney with nothing more than a single suitcase and one piece of carry on luggage. I was living on my cousin’s couch at the time when the script for Redfern Now came to my attention.

I was excited to see so many talented Indigenous artists and Indigenous key creative/s attached to this particular project. Finally, I could recognise a character and story that more of our community could connect and make relation to.

The narrative and context surrounding my experience impresses upon the importance of opportunity. Without the opportunity of Redfern Now, I would not have learned so quickly the necessary on set skills that prepared me for my next venture; to hold my own in my artistic integrity, to be bold and fearless in my craft and the many more invaluable lessons that can only be acquired through experience. The first season was about obliterating archaic narratives and challenging preconceived stereotypes about Indigenous peoples and our suburban landscape. It was about being the author of your own experiences and finally giving us the permission to take the reigns in how these stories are told. Such was the premise for Redfern Now.

Who are we, in our collective consciousness, cohesive artistic abilities and personal responsibility to the sector, if we are a nation that does not include such perspectives and narratives?

Indigenous people and those who are often marginalised and deemed invisible in our communities are vital threads to our fabric of storytelling.

Without such content we are inauthentic and leave ourselves open to an American and UK market that seeks to eradicate that voice entirely. A quality Australian series like Wentworth costs an average $1.3M per hour to produce. Imported US/UK drama costs less than a 1/10th of that – as little as $3,000 per episode. Left to the market, broadcasters would buy overseas content rather than commission new Australian drama and comedy content, even though there is an audience and appetite for it. We need more targets and inclusivity, not less if we are to seriously shift the perspective lens and change the landscape on a national and international level.

Some of the most damaging ideologies that exist are the ones that uphold the complete eradication of our history, of our culture, of our voice and of our people. The damage comes when the greed and ineptitude seen from the major studios in this country that wishes to abolish these content regulations because they do not want to make the necessary investments.

They do not want to include you into their grand narrative.

It doesn’t feel nice, does it?

As an Indigenous woman, I understand and am all too familiar with this feeling of exclusion, of denial, of frustration and of anger. After 229 years of colonial occupancy and control, of dictatorships and deliberate erasures of our stories, history and humanity by various powers and authorities, what is happening now comes as little surprise.

I am now stressing to you the importance of keeping our stories alive for we are lost without them and they help us to remember who we are. In order to remember who we are we have to know who we are and we have to be real with ourselves. We have to be honest about our past, be honest about our present and be clear about what we want to become. It’s imperative we maintain the resistance and are aware of our responsibility to never allow a level of complacency to manifest in our decision-making processes and what we evidently see on our screens. We should not have to justify or plead for our stories to be told with equal weight and consideration.

Everything we do is about building and maintaining our legacy. We are all running out of time.

The world is changing at unprecedented levels and we now live in a technological society whereby the viewer has reached an insatiable appetite and demand for content. Digital technologies are transforming the way Australian content is being watched, experienced and discovered. Current rules for minimum Australian content only apply to the commercial networks (free to air and pay TV) with no content regulation to the digital realm. Under the terms of the Australia/US Free Trade Agreement, if our local content regulations are reduced or abolished, they cannot be reintroduced even to previous levels. We need to defend content rules in TV and extend them into the online forums.

It’s crucial we support and fund Australian stories that are unique to our history and our culture, that challenge systemic ideologies and elitisms, that deconstruct mysticisms and tokenisms as we continue to make way for us to negotiate how we, as a collective, are to navigate and place our stories into 2018 and beyond.

We cannot take that risk that networks will voluntarily make Australian content and we cannot afford to settle because the next generation is watching.