The global voice of journalists

MEAA is an affiliate of the International Federation of Journalists (IFJ) – the world’s largest organisation of journalists, represents 600,000 media professionals from 187 trade unions and associations in more than 140 countries. Established in 1926, the IFJ is the organisation that speaks for journalists within the United Nations system and within the international trade union movement. The IFJ is headquartered in Brussels.

The IFJ does not subscribe to any given political viewpoint, but promotes human rights, democracy and pluralism.

The IFJ is opposed to discrimination of all kinds and condemns the use of media as propaganda or to promote intolerance and conflict.

The IFJ believes in freedom of political and cultural expression and defends trade union and other basic human rights.

The IFJ is the organisation that speaks for journalists within the United Nations system and within the international trade union movement.

The IFJ supports journalists and their unions whenever they are fighting for their industrial and professional rights and has established an International Safety Fund to provide humanitarian aid for journalists in need.

IFJ policy is decided by the Congress which meets every three years and work is carried out by the Secretariat based in Brussels under the direction of an elected Executive Committee.

The IFJ International Press Card (IPC) is recognised the world over and is the only press pass endorsed by national journalists’ groups in more than 130 countries. 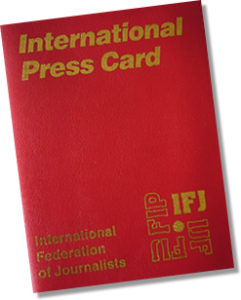 It provides instant confirmation that the bearer is a working journalist. It is only issued to genuine journalists who are committed to ethical standards and solidarity between media professionals.

The IPC connects journalists globally and ensures that IFJ affiliated organisations extend to the IPC bearer assistance and courtesy in the performance of her/his mission.

Journalists travelling in conflict zones have testified to the benefits of the IPC. It has helped many journalists get out of tricky situations in dealing with soldiers, police or officials.

How to apply for an IFJ International Press Card

The IFJ does not issue press cards directly to individual journalists. In order to apply a journalist MUST be a member of a union or association affiliated to the IFJ. For Australian journalists, this is MEAA. You can download MEAA’s IFJ international press card application form here.

Once issued, the card is valid for two years. Please contact MEAA Member Central to learn more about the card. Note that you must be a financial MEAA Media member to be eligible.

The IFJ has partnered with battleface, a provider of travel insurance benefits and services to travellers visiting or working internationally, to offer an all-inclusive travel insurance to journalists. Members will be protected for emergency medical expenses and evacuation, as well as covered against accidents and injuries. They will also be able to insure their equipment while travelling anywhere in the world.

Many insurance companies refuse to insure news professionals working in dangerous areas, or do it at very heavy costs, which results in many reporters and freelancers, including fixers and technical staff, covering news in some of the world’s most dangerous countries without the safety net of an insurance policy.

On-the-ground emergency support is built into every policy, and accessible via a tech-based platform that fits in your pocket. Options to cover equipment and a 24/7 crisis response for victims of violent crimes, wrongful detention, mysterious disappearance, kidnapping, blackmail, extortion, political threats, hijacking, and acts of terrorism is also available.

IFJ members can secure full protection for emergency medical evacuation and accidents, insure their equipment 24/7, all whilst traveling anywhere in the world. Members can be protected for emergency medical expenses and evacuation, be covered against accidents and injuries and will also be able to insure their equipment whilst travelling anywhere in the world.

And what’s more – if you are the holder of an IFJ Press Card – you enjoy an exclusive discount too!

IFJ President Younes Mjahed says: “Getting insured is an absolute necessity when traveling and working overseas. Media workers are often taking immense risks to report and many currently travel without any insurance. This is particularly true for freelancers who often do not benefit from media’s own insurance schemes. This new insurance will allow this, at very affordable rates, to all our members across the world”

To find out more about cover and to get a quote, click HERE

About battleface
battleface provides unique travel medical insurance benefits and services to travelers visiting or working internationally, including in the world’s most challenging places. Where ordinary insurance stops, battleface keeps going: through conflict zones and lawless areas; into the surf and beneath the waves, across isolated deserts, up the sides of mountains and more. battleface covers dangerous places, emergency medical treatment, evacuation and accidents, and adventure travel to isolated places with 24/7 on-the-ground assistance and claims services. battleface was developed by Tangiers Insurance Services, an insurance intermediary and Coverholder at Lloyd’s of London. 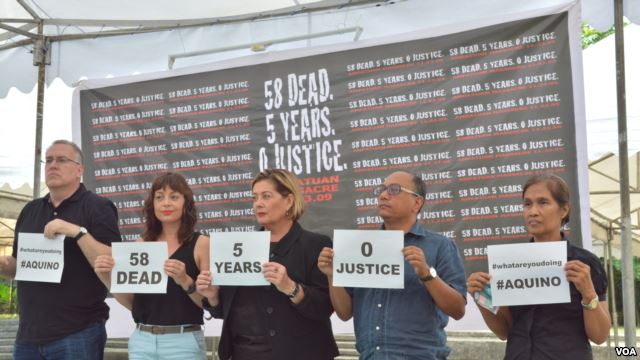 The IFJ’s Asia-Pacific office is hosted by MEAA’s Sydney office. Its priorities are:

It works in these countries: