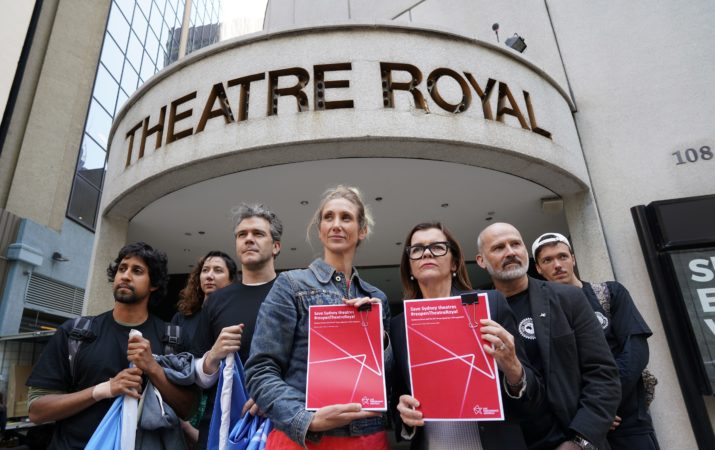 Thousands of people have lent their support to the campaign to re-open Sydney’s Theatre Royal.UPDATE: On March 18 2019 Dexus announced it has entered into a conditional agreement for a 45-year lease with the NSW government to refurbish and run the theatre. This fantastic result wouldn’t have been possible without the groundswell of support from MEAA and LPA members.

More than 7700 people have signed an online petition calling on the owners of the Theatre Royal site — The GPT Group and Dexus — to re-open the venue which has been closed for two and a half years.

Evelyn Richardson, Chief Executive of Live Performance Australia, said it was time for the theatre’s owners to declare their plans for the future of the Theatre Royal.

“Theatre-goers, industry workers, the City of Sydney and NSW Government have all expressed their support for the re-opening of the Theatre Royal. See related images.

“We’ve delivered our petition to reopen the Theatre Royal to the co-owners, The GPT Group and Dexus. We need a clear statement from the co-owners as to what their plans are, instead of the non-committal responses we have heard to date. See news video of petition delivered to The GPT Group.

“The Theatre Royal is a vital part of Sydney’s cultural infrastructure and its future matters for Sydney’s
reputation as a great destination for live theatre performances.

“While the Theatre Royal remains closed, our live performance industry is losing hundreds of jobs each year, $35m in box office revenue annually and Sydney theatre-goers are missing out on the chance to see great Australian and international productions. The theatre’s closure has already cost the NSW nightlife economy more than $140 million.

“The thousands of people who supported our petition deserve some straight answers from the co-owners on what their plans are, beyond a never-ending ‘review’ which has been going on for months now.

“There are theatre management groups keen to restore the Theatre Royal to its former glory and bring live performance back to the centre of Sydney.

“The spotlight is now on The GPT Group and Dexus. It’s time for them to do the right thing and honour the deal agreed back in 1972 with the people of NSW to retain the theatre. It’s time to reopen the Theatre Royal,” Ms Richardson said.

Chloe Dallimore, Federal President of MEAA Equity, said the Theatre Royal had a special place in the hearts of generations of performers, theatre workers and audiences.

“It is such an intimate theatre despite its size, and must return to being a vital live performance destination as was promised more than 40 years ago.

“As it is, Sydney is being overlooked for major theatrical productions because of the shortage of live venues and we simply cannot afford to lose a venue of the stature of the Theatre Royal.

“The developers must take these community concerns into account and reopen the the Theatre Royal.”

Reporting on the Australian bushfires