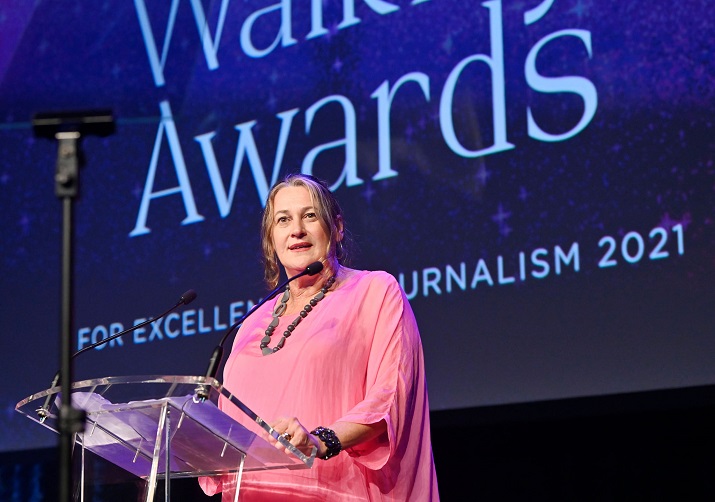 Karen Percy is the federal president of MEAA Media and deputy chair of the Walkley Foundation. This is an edited version of the speech she gave at the presentation of the 2021 Walkley Awards in Sydney on Friday, February 25, 2022.

How wonderful is it to be back in the room, together, celebrating great journalism?

And while there is much to celebrate, we also need to be vigilant about the dangers that beset the media.

An erosion of trust between news outlets and consumers continues to undermine the important work we do.

There is ongoing uncertainty about the sustainability of many media outlets.

While the Mandatory Bargaining Code has brought much needed money into the industry.. Google and Facebook are still refusing to negotiate with some outlets.

And we know public interest journalism is still in peril.

That’s especially so outside of the big cities.

Two weeks ago, MEAA released the findings of its survey of regional journalists. It is sobering reading.

Nine out of 10 survey respondents say the health of regional journalism in Australia is poor to very poor. Not surprising given the hundreds of jobs lost and the dozens of mastheads and outlets that have closed in the regions since even before COVID hit.

Sixty-one per cent of respondents said the future for their career as a regional journalist looks poor to very poor. Fifty-four percent didn’t see themselves working in regional journalism in five years’ time.

That’s a crisis. That’s a tragedy. And we must do something about it.

We need financial investment and other support to expand the journalism that’s on offer to regional, remote and rural communities.

The journalists surveyed said they were concerned that further closures of media outlets in the regions would only cause more harm for their local communities.

Barely one per cent of survey respondents supported more mergers and acquisitions among media corporations.

We’ve seen the federal government kick in money in recent years. and that’s welcome. But $5 million here, and $10 million there, falls well short of the $250 million that the Centre for Future Work identified last year would be needed to sustain a healthy media sector.

We know that quality, ethical public-interest journalism is crucial for a strong democracy.

Let’s consider a few things… Australia’s place in global rankings on press freedom according to Reporters Without Borders has fallen five places from 2019 to 2020 – we’re in 26th place.

Coincidence? I think not.

Journalists must not be stopped from doing their jobs.

In recent years we’ve seen an increase in journalists being threatened, abused – online and in real life.

We’ve seen them belittled and berated by public figures, particularly members of government.

Our defamation laws are used to stop exposés, to silence criticism.

Journalists and whistleblowers increasingly find themselves at risk of jail.

A mature democracy, a credible society is not afraid to let the light in.

As we swing into the season of political promises – with elections in SA, Victoria and of course nationally this year – let’s ask something for our industry:

That governments, oppositions, politicians, new candidates, new parties, old candidates, old parties sign a pledge to respect and honour press freedom, to put accountability and transparency at the heart of our democracy, to answer the questions asked, to respect Freedom of Information processes, to not hold court cases in secret, to not spread disinformation and hide behind claims of fake news.

The Federal Government also needs to support efforts to free Julian Assange, the WikiLeaks publisher who is languishing in a UK prison as the United States pursues his extradition. WikiLeaks, with Julian at the helm, was recognised in 2011 with the Walkley award for outstanding contribution to journalism.

As we watch our colleagues tonight get the awards and the recognition they deserve, let’s not forget what the case against him means for all of us committed to public interest journalism.