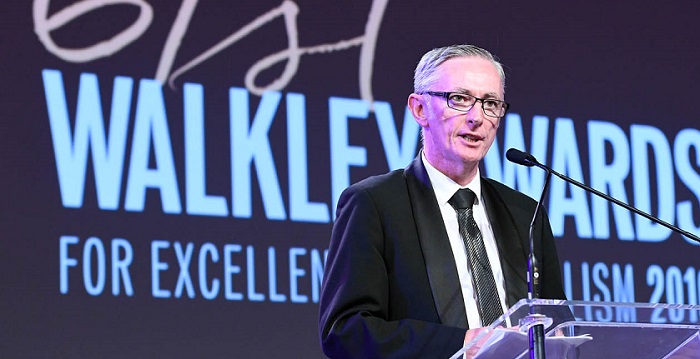 I pay my respects to the Gadigal people of the Eora nation, the traditional owners of this land we meet on. To their elders past, present and emerging, and I acknowledge their ongoing custodianship of this land.

One night I would like to stand here and praise our government, our parliament, for what they have done to protect press freedom.

Maybe next year. Hopefully next year. But most certainly not tonight.

Because the reality is our Parliament has made telling the truth – bringing important stories to your fellow citizens – a criminal offence.

Armed police can raid your office. Or even more disgracefully, your home.

And it’s not just journalist truth tellers who are subjected to this.

Take Richard Boyle. He was concerned about harsh, unreasonable and possibly unlawful, debt collection methods by his employer, the Tax Office. He raised his concerns with his superiors but after seeing no action, he decided to go public.

The truth was told with the assistance of journalists at Nine Publishing and the ABC. It has led to a parliamentary investigation and an inquiry by the Small Business Ombudsman that will lead to changes in Tax Office practices.

But Richard’s life has been shattered. His home was raided. He is now being prosecuted and faces six life sentences for telling the truth.

Richard’s story has become the experience of several whistleblowers that are punished, when they should be encouraged, and protected, for exposing wrongdoing on behalf of all of us.

In fact, you could argue that the strongest protection for whistleblowers at present is in the ethics of our own profession.

Someone who makes a confidential disclosure to a journalist knows that journalist will protect their identity in all circumstances. Even under threat of jail. That unshakeable ethical obligation is at the heart of our profession.

The Right to Know campaign calls for protection for whistleblowers, and much more.

Research for the campaign showed 87 per cent of Australians value a free and transparent democracy where the public is kept informed. But only 37 per cent think this is happening in Australia today.

In the past 20 years, around 75 laws related to secrecy and spying have been passed by our Parliament, each one chipping away at what Australians can know about their government.

The Right to Know campaign is seeking reforms to these laws in six key areas:

– The right for journalists and media companies to contest applications for warrants;

– Exceptions from laws that criminalise journalists for doing their job;

– Limits on which documents can be stamped as “secret”;

– A properly functioning freedom of information regime; and

The unparalleled unity of our industry, of our profession, in this campaign is inspiring and unshakable. This campaign will not stop until our Parliament takes action on reforming these laws.

And reforms are essential. Australia’s role as an open and transparent democracy and a defender of democratic freedoms is more important than ever. But our reputation has been damaged. It is harder for Australia to advocate on the world stage if our own house is not in order.

Last year 95 of our colleagues around the world lost their lives in targeted killings, bomb attacks and crossfire incidents. More than 250 journalists were in prison.

A recent New York Times study found that the term “fake news” has now been used by 50 governments on five continents to justify attacks on the media.

We must also remember that two Australian citizens, and MEAA members, are in prison overseas.

Yang Hengjun, a prominent Chinese-Australian blogger and author, is accused of espionage in China.

Julian Assange may be extradited to the United States to possibly face a lifetime in prison. Among the charges, Assange is accused of publishing material that “could harm the national security of the US”. The scope of those words should alarm every journalist.

MEAA has called on the Australian government to do all it can to gain the release of both Australians.

I’d like to thank you all for your support for media freedom.

Every Australian has the right to know about the decisions governments make in our name.

That’s why our campaign will continue, and succeed.