I’d like to acknowledge, and pay my respects to, the traditional owners of the land on which we meet: the Elders, past and present, of the Wurundjeri people of the Kulin nation. 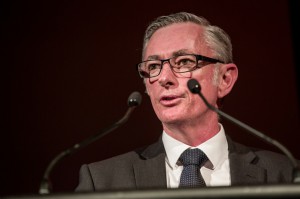 And at the outset I’d like to congratulate the Melbourne Press Club for arranging this evening. The annual Press Freedom Dinner in Sydney has become an important event – both for highlighting issues of concern for our profession, and for raising vital funds for a great cause.

It’s wonderful to see this initiative here in Melbourne for the first time.

This year has been a particularly tragic one for journalists. According to data collected by the International Federation of Journalists in Brussels, 80 journalists and media workers have been killed around the world so far this year. Most of them deliberately targeted because of their work.

And if one sad fact is known about these killings it is this: in most cases, no one will do anything about the death of our colleagues.

The police investigations, if they commence, will be half-hearted. Any gunmen that are caught will never be compelled to reveal who ordered the killings – who paid for the murders.

And if a case ever makes it to court it’s likely it will become bogged down for years in claims and counter-claims… Because that’s the reality of what happens. Journalists and media workers are killed with impunity.

The Philippines is a tragic example on our doorstep.

Since 1986 and the overthrow of the Marcos regime, more than 170 journalists have been killed. The greatest single atrocity – the murder of 32 journalists in the Ampatuan Massacre in 2009 – has still not seen a single conviction. Unbelievably, there are still 84 suspects who remain at large including 41 police officers. And the spate of killings in that country has not abated, with a further 40 journalists gunned down in the past six years.

Impunity has spread across the Asia-Pacific – in Pakistan, Sri Lanka, Bangladesh and Nepal.

And in Australia we have had our own tragic experiences.

This year marks the 40th anniversary of the murder of six of our colleagues in East Timor. On Thursday October 16 1975, five journalists, working for the Seven and Nine Networks, were killed in the town of Balibo. On Monday December 8 1975 Roger East, working for AAP, was murdered in Dili.

MEAA has campaigned to see those responsible for their deaths held to account.

We were heartened by the 2007 NSW Coroner’s inquest into the deaths of the Balibo Five, which identified those responsible. And we had hoped that a similar inquest might allow us to learn more about Roger’s death.

We felt that when the Australian Federal Police began its investigation in 2009, we would finally get to see some action, albeit belated, in this tragedy.

But we now know that the AFP, five years after its investigation began, decided to shut down it down without ever having sought any cooperation from Indonesia. Not even interacting with its counterparts in the Indonesian National Police… Six of our colleagues murdered and 40 years later not a single individual called to account.

I would like to extend MEAA’s best wishes to the representatives of the Timor Six at tonight’s dinner. I can assure you we will continue to campaign for justice. Because to do anything less means that their killers are literally getting away with murder.

Along with our partners in the International of Federation of Journalists, human rights organisations, and the community of journalists around the world, we constantly campaign for press freedom.

Unfortunately the work seems never-ending. Tonight more than 200 journalists are in prison because of their work. Because they dared to bring important stories to their communities.

But there is still the matter of a pardon for Peter and the other Al-Jazeera journalists wrongly convicted in absentia, as well as many other Egyptian journalists still wrongly imprisoned.

In our own region of the Asia Pacific, we endeavour to provide practical support to journalists and their families. And I’d like to talk a little now about how your attendance and generous donations tonight will help to support this important work.

All funds raised tonight go to the Media Safety and Solidarity Fund. The fund is a MEAA initiative, supported by the New Zealand journalists union and the Japanese broadcasters union. It provides emergency assistance to journalists in danger in the Asia-Pacific region.

That may include providing them with legal assistance or a safe haven if they are personally threatened. The fund also provides emergency aid to journalists and their families and media groups affected by natural disasters.

Currently the fund is assisting to help rebuild radio equipment and other infrastructure in Vanuatu after the destruction of Cyclone Pam and in Nepal after the April earthquake.

Importantly, the fund also supports the education of more than 100 children in the Asia-Pacific – the children of our slain journalist colleagues.

Your donations tonight will help fund their primary and secondary education, allowing them to get a decent start in life in the wake of the death of their parent who was often the sole breadwinner in the extended family.

I urge you to give generously to the Media Safety and Solidarity Fund tonight because you really will be doing something to restore some justice for people who all too often have been denied it.

I again thank you all for being here tonight, supporting the cause of press freedom, at home, and abroad.

Have a great evening.

Speech by Paul Murphy at the Press Freedom Dinner Melbourne